The season premiere of The Big Bang Theory airs this Monday, and in honor of that comic event, I got a chance to chat with Simon Helberg, who plays nerdy engineer/clothes horse Howard Wolowitz. Not only is Helberg starring in one of the coolest shows on television (I'm a fan...I'll even admit to playing "rock, paper, scissors, lizard, Spock"), but he's won the hearts of geeks everywhere by appearing in the Joss Whedon juggernaut, Dr. Horrible's Sing-along Blog. The little internet musical that could just took home an Emmy. Extra impressive, since the show never aired on television. Helberg plays Moist, henchman to Dr. Horrible (Neil Patrick Harris). His superpower? The ability to dampen things. Helberg will also be appearing in the upcoming Coen brothers film, A Serious Man. Helberg gave us the scoop on what we'll be seeing on Big Bang this season, what's going on with the Dr. Horrible sequel, and whether or not he'd like to appear on another Whedon project, Dollhouse.

The show is incredibly popular. As a geek myself, I get it. But what do you think it is about this show that gives it such a wide appeal?

Well, I think that everybody is kind of a nerd at heart. We're all nerds, and this show kind of calls that out. It's fun to root for the underdog, which I think our show is really about, these outsiders. And I think people, in general, grow up thinking there's this pocket of nerds and this pocket of really cool people. But when everyone goes home, they're all kind of nerdy. This has become a place to kind of feel like you're not alone with your geekiness. And it's just quick and funny and colorful...but on a psychological level it's touched some nerve with people's inner-nerdiness.

There is no way I can talk about Wolowitz without asking you where he shops. He's got some crazy outfits.

Yeah. [laughs] Let's see. I think we have some very talented people who do the shopping for me. But as a character, I'm sure...he's definitely going to hit up Urban Outfitters. There are a lot of those tight jeans which I believe come from there. Probably some catalogues. I think he doesn't stop shopping. I think he's going to do quite a bit of catalogue shopping online and L.L. Bean and get the foundation for his outfits. The turtlenecks. Very simple. Then move into some cooler stone-washed jeans from Outfitters. Maybe find some vintage stuff on ebay. I think it's a constant process. I think he's got to devote a couple of hours a day to it, to get that look.

I'd love to see the belt collection.

[laughs] That might be on the black market or something. There's something dirty about having him get all those belt buckles. I don't know how he affords it. I mean, he's an engineer at a university. Who knows? There's something fishy about being able to afford that stuff.

You guys are just back from the Arctic in the season premiere and you've sporting some serious facial hair...

We had actually all grown beards over the summer, and essentially we were deemed not manly enough to use the real beards. They wanted bigger, more unruly beards than we had, so I guess our beards were too George Michael. They wanted Manson. So we got some fake beards and a lot of spirit gum. And a little buzz from the spirit gum, smelling it for hours...it was a long process getting this stuff on, but it looked good.

So we know the show will be exploring the whole Penny (Kaley Cuoco)/Leonard (Johnny Galecki) relationship this season, but what's going on with Wolowitz?

It's so funny. We don't know anything that's going to happen until we get the script, like the night before we do the reading. It's totally true. So we're constantly finding stuff out. I do know...I can tell you from what we've done that...we're only a few episodes in, but I know that Penny and Leonard are dating, sort of disfunctionally. I know that. A sort of on and off version of dating, and casually. And so the dynamic shifts within the group. At a certain point, without giving too much away, something happens and Raj (Kunal Nayyar) starts working for Sheldon (Jim Parsons) at the university, and I'm left kind of out in the lurch. And Raj is my constant...he's my little pet. I can tell him what to do. And he's always at my side. And you find out how much he really does mean to me, and then I'm essentially left out. And I become the third wheel for Penny and Leonard. Not kind of picking up on the obvious signs that they want some alone time. Now that Raj is gone, I kind of stick to them, and it's awkward. We become a couple plus one really annoying guy who's trying to cook them breakfast. There's a lot of stuff where you see how close I am to Raj. There's a scene where I essentially go after a girl and it kind of screws up these plans that we had, and we essentially have a lovers quarrel. He's tired of me chasing after girls and leaving him stranded. And I have to win him back and go to his department. And he says, "You're always leaving me for something prettier." [laughs] You get to kind of explore the nuances of the each other's relationships this season. I think it's going to be pretty fun. The scripts are tremendous and we're having a good time.

I have to move onto Dr. Horrible. I heard that you weren't a huge Joss fan...

Well, [laughs] it wasn't that I wasn't a huge fan. I was unfamiliar with his stuff...I didn't know a lot of his stuff. I knew people that were obsessed with it. I just somehow missed that boat, I guess. So when I got the call...I knew his brothers who wrote it and one of his brother's wives wrote it (Zack Whedon, Jed Whedon and Maurissa Tancharoen), and I knew them from high school. And they called and asked me to be in it. I knew Joss was a really big deal, and that people love him. I was very excited. I wasn't as nervous as I probably would be now, knowing how iconic he is, I guess. I didn't understand it then. That made it less nerve wracking...now I see there's a Whedonopolis. It's just insane. So it's actually kind of nice to be a little ignorant. And now I'm a huge Joss fan. It's very cool. And it was very fun to be a part of that.

And your character Moist has his own comic book...(Mosit: Humidity Rising)

I've seen that online...the whole thing is hard to even grasp. How big of a thing it became. And of course, we ended up winning an Emmy for an internet show that was never on television and never will be. We won a television award...it was kind of an amazing moment.

And well deserved. I have to ask you about the sequel. I know it's being written now. Can you give us any news on what size your role is going to be? And are we looking at a feature length film? 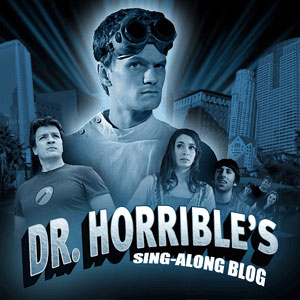 I know there is something being written, and I don't quite know what medium it is being written for. I think it's a movie. It could also be another internet sort of thing. And also it could be, you know, a Broadway play. My hunch is that it's a movie, and I've heard pieces of the story. I am a part of it. And it's pretty brilliant and they've thought it out on the same sort of scope as any kind of amazing epic, Star Wars or Godfather, where there's history and betrayal and amazing stuff. It sounds like it's going to be brilliant. I can't wait to find out more. I know people are very excited about it.

Do you have any idea when the script is going to be done?

I don't. The only thing I know is that Neil and I are kind of on the same schedule as far as doing shows. And Nathan (Fillion) is on a show, so I mean, if we were to shoot anything, it would have to be during the summer. During the hiatus. I would think that he might be hoping to try to get it going for this coming summer, but even that might be too soon. I'm not sure where they are in the process. I know they're writing, and everyone's anxious.

I interviewed Neil a while back and he had mentioned being interested in being on Dollhouse. Knowing that Joss likes to cross over his casts, would you be interested in appearing on that show?

Yeah! Of course. Absolutely. I have tremendous faith and trust in Joss and all of them, Jed and Zack and Marissa who wrote it. And I know Jed and Marissa write on Dollhouse, and I know some of the actors there, and yeah. It would be very fun...it's such a craft to what he does and what all those Whedons do. They're tremendous. So yeah, I would absolutely do something.

The season premiere of The Big Bang Theory will air Monday, September 21st at 9:30 on CBS.