All architecture is what you do to it when you look
upon it;
(Did you think it was in the white or gray stone? or
the lines of the arches and cornices?)

-- Walt Whitman, from A Song for Occupations 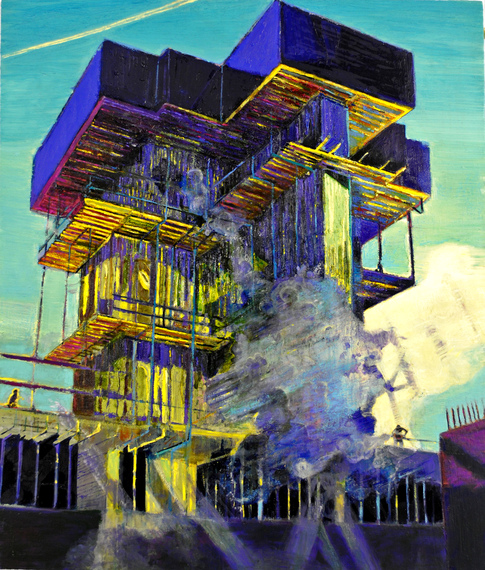 Armature started out as a term of sculpture and architecture, denoting a physical framework and stabilizing an object during fabrication. Later, it was used as an interpretive analogy in Cubism to describe the underlying organizational skeleton, on which elements of quasi-abstraction could be hung to keep the image together. In the vibrant, densely built, spatially complex paintings of Simon McWilliams, armature fulfills the pictorial aspect of its meaning -- and takes a lead role in the content of the images -- as his aesthetic affinity for the dynamic ambiguity of construction sites frequently leads McWilliams to depict actual architectural scaffolding in his compositions.

He loves the way construction zones exist at the coincidence of creation and destruction -- the colorful flapping tarps, stark lights, clouds of dust, contortions of space and perspective, the eliding of geometry and weather. In turn, the presence of these, and other artifacts of the familiar world, hold together compositions that might otherwise threaten to dissolve into abstraction. McWilliams is keenly aware of this threat, and he is forever shoring up against it:

"I'm going for a more ambivalent surface -- for a formalism that is fundamentally abstract, despite my ineffable need for a scaffold of realism to hang it on."

Not ready to submit to the pure desires of the pigment, it's no wonder he's attracted to real places with unreal qualities.

It's like Turner, with works of majestic ambiguity, like rain, steam and speed. Having the impulse to paint abstractly, but lacking the language to support it, Turner sought out things that already looked abstract and painted those. McWilliams, like Turner, and indeed like bard of the skyline, Walt Whitman, deploys abstraction as an inherent quality of the post-industrial epoch. McWilliams is looking at ordinary cement, rebar, polyurethane and debris, but he's using paint and saturated color to understand it; melding natural, industrial and emotional phenomena into a singular expressive construct, and prompting our attention to not only what we see, but how we see it. 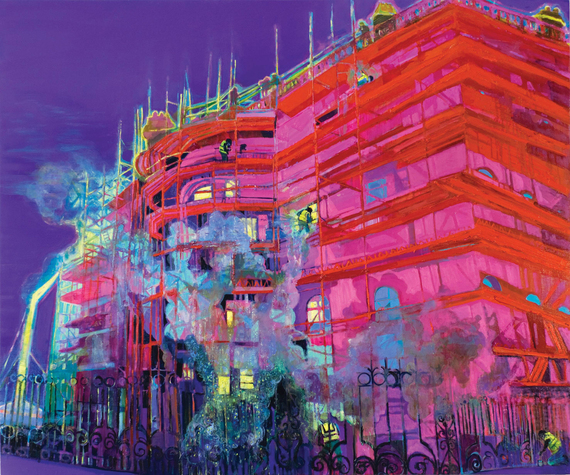