Parkes, who is set to star in a new documentary on alien abductions, told the Northern Echo that he has fathered a child with an alien. In fact, Parkes says he has sex with an extraterrestrial he calls the "Cat Queen" four times a year. In case you're wondering, the kid's name is Zarka.

Unsurprisingly, Parkes says the relationship has put some strain on his marriage with his human wife.

Parkes' belief in aliens is well-documented. In the past he has told stories of abduction and claimed that his real mother is a 9-foot-tall alien with eight fingers. He says he was first contacted by extraterrestrials while he was still in the womb.

Parkes appears in a number of videos on the YouTube channel Underground Video (UK) Research and Archive Pirate Radio, where he and others describe their very-alleged experiences with aliens. In one clip, Parkes is hypnotized in an attempt to access repressed abduction memories. The video is part of a series of interviews done with the Anomalous Mind Management, Abductee, Contactee Helpline Project, a British group devoted to work with those who have (very purportedly) been kidnapped by aliens.

Check out more of Parkes' bizarre statements over at The Huffington Post U.K.

The attention for Parkes comes on the heels of former Canadian defence minister Paul Hellyer's testimony before six former congressmen at the Citizen Hearing On Disclosure in Washington D.C., in which he asserted that at least four species of aliens have been visiting Earth for thousands of years and that extraterrestrials are at this very moment working in concert with the U.S. government.

Do you think politicians speaking out about aliens is evidence that they really are visiting Earth? Or are politicians the last people you're likely to believe? Share your thoughts in the comments below. 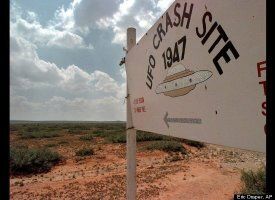 1 / 46
Roswell
America's most infamous UFO case centers in Roswell, N.M. Some people claimed an alien spacecraft crashed there in 1947; the military said it was a weather balloon.
Eric&#x20;Draper,&#x20;AP