What in God's Name: A Novel
By Simon Rich
Reagan Arthur Books
240 pages

Simon Rich is probably the funniest writer working in America right now. He also might be the most prolific young person in the history of time. One of those sentences is a hyperbole, but both, at times, feel genuinely true when you consider what Rich has put out in the last few years.

Before Rich turned 25 he was already publishing essays in the New Yorker and books of satire, which parlayed into jobs writing for Saturday Night Live and touching up screenplays for Pixar. Now the guy's already on his second novel -- the first of which, Elliot Allagash, was recently optioned for film by director Jason Reitman -- and he doesn't seem to be slowing down anytime soon.

Rich's newest work, the novel What in God's Name, continues with his brand of deceptively simplistic, often laugh-out-loud prose. The story focuses on Craig, an overworked angel in the Miracles Department of Heaven, Inc., who loves his job more than anyone. Craig is a master of small miracles, like that time he anticipated that an elderly professor at Oxford "was about to refer to his only black student, Charles, as 'Jamal.'" To save the situation, Craig short-circuits the fire alarm, which empties the classroom just in time. He also helps people catch buses and avoid puddles.

In Rich's world, Heaven is a sprawling campus of departments and buildings complete with sushi restaurants and workout facilities for the staff, all under the watch of God -- a bumbling, self-obsessed CEO with a predilection for televised NASCAR races, golfing and reuniting Lynyrd Skynyrd. God doesn't like working very much and hasn't even touched the overwhelming stack of unanswered prayers on his desk.

He's tired of humans, and doesn't feel like helping them anymore.

"I'm gonna level with you," God tells Craig at one point. "With that whole mankind thing? I bit off way more than I could chew."

After a particularly overwhelming day, God decides to scrap humankind entirely so he can open an Asian fusion restaurant called Sola. Craig is devastated; ­humans are his life's work. So along with his angel-crush, Eliza, Craig decides to save humanity from God's wrath by answering one very complicated prayer from God's endless stack: They must force two very awkward humans to kiss. 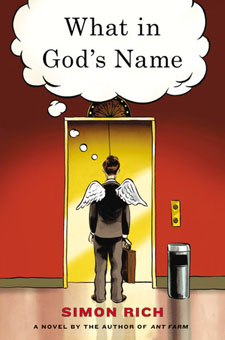 Now, certainly Rich isn't the only satirist to imagine the afterlife like this. I found myself thinking of Defending Your Life, the 1991 romantic comedy by Albert Brooks. In that film, heaven was "Judgment City," made up of all-you-can-eat buffets, comedy clubs and bland office buildings, where human beings go to have their entire lives inspected in a court of law, determining whether they stay around or go back to Earth.

What Brooks and Rich both realize, however, is that none of this satire works without a love story at the center. Brooks gives us Meryl Streep, and Rich gives us two -- Craig's relationship with co-angel Eliza, and the two earthlings that the angels must force together, NYU students Sam and Laura.

Rich's tone is always cinematic, and God's Name often resembles a 1980s John Hughes film, complete with awkward love, nerd power and knowing references. His comedy is never anything but spot-on and succinct, continuing in the vein of his other work, which combines the best of Douglas Adams and early Woody Allen with the heart of a classic Neil Simon play.
In God's Name, we know what's coming from a mile away, but who cares? Rich moves us toward a potential apocalypse quickly and with a humor and heart all his own.

This story originally appeared in the Literary Issue Huffington, in the iTunes App store.