Simone Biles' extraordinarily spectacular Olympic gymnastics gold accomplishments resulted in a great deal of support, pride and kudos from the public and also, unfortunately, nasty backlash that has been reported elsewhere. 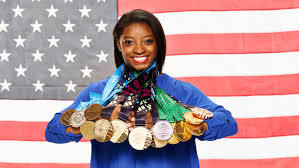 Additionally, the reporting of Biles' successes has unintentionally opened the door for some heated and much needed adoption discourse.

As most everyone now knows, Simone Biles and her younger sister, Adria, were raised by their maternal grandfather and his wife, who adopted them when Simone was three and her sister just 14 months old.

At the 2016 summer games in Rio De Janeiro, NBC gymnastics announcer Al Trautwig drew enormous criticism when he referred to Ron Biles and his wife Nellie as Simone's grandparents on Sunday's NBC primetime broadcast. Someone tweeted Trautwig to say that he should call them her parents, to which he replied: "They may be mom and dad but they are NOT her parents."

"I regret that I wasn't more clear in my wording on the air," he said in a statement emailed by NBC Sports. "I compounded the error on Twitter, which I quickly corrected. To set the record straight, Ron and Nellie are Simone's parents"

Feedback reflected public outrage that a reporter accurately reported the biological relationship of this family as well as its legal status.

Yet far fewer complained about the truly rude and insulting, defamatory, sensationalized headlines, such as the one that screamed "The Olympic Gymnast Who Overcame a Drug-Addicted Mother."

Lost in all of this brouhaha is that Simone Biles is a 19-year-old world champion in the women's all-around event, who hasn't lost a competition since 2013. Also lost is that Shannon Biles, Simone's mother, is a human being who has overcome her past indiscretions, has been sober for nine years and did not, as she says, deserve to be trashed by her father and the press. She is a woman who is exceedingly proud of her daughter's accomplishments and cherishes her time with her child.

I urge everyone reading this to view her story in her own words on video thanks to Minou Clark, Associate Editor at Huffington Post.

But it was Trautwig's statement that hit a nerve with many adoptees. Angela Fritz, an atmospheric scientist and The Post's deputy weather editor, who is also adopted wrote a column in Fairfield-Suisun California Daily Republic in which she talks about being asked "Do you know who your real parents are?" saying how it:

"...carried me back to a time when I, too, was forced to defend the realness of my family. I wonder how the moment affected other adoptees."

She goes on to the main point of her column in which she alleges there remains today a "stigma of adoption" which apparently Trautwig's comments triggered for her.

"Through much of the 20th century, adoption was taboo. Giving up your child to strangers was considered selfish, even sinful."

Pregnancy outside of marriage was taboo and sinful (and still is in some families and communities). Young, single mothers were made to believe that placing their child for adoption is a selfless, sacrifice that would remove the stigma and shame of "illegitimacy" for their child. Mothers were - and still are - counselled that it is the "loving" thing to do and that keeping their child would in fact be selfish when others could provide their child so many more "advantages." Their maternal love is used against them.

Then in a cruel ironic twist, the minute they do what they are convinced is the "right" and best thing to do, the public turns on them with harsh judgement because women especially need to believe that they could never, under any circumstance, give away a child. Conversely some praise birth mothers and call them "brave" for having saved their child's life by not doing something most never thought to do! Ann Fessler's book The Girls Who Went Away describes many such experiences of mothers from 1945 to 1973.

Fritz's reaction and the never-ending battle over which set of parents are "real" stirred me to comment (on the website where Angela's column is posted):

"Angela, people ask those questions because adoption is ... a legal construct, not one that happens on its own, naturally or biologically. If you met someone with purple or green hair you might ask what their natural or real hair color is. While fun - those hair colors are not ones anyone is born with.

"You existed before you were adopted...Why should it feel odd or awkward to be asked about your origins? Aren't you curious? Why is it any more odd for an adoptee to be asked about their genealogy than it is for all the thousands of non-adopted persons who search out who their ancestry? If you met someone who introduced you to their STEP mother or father, might you not ask if they know and/or have a relationship with THEIR "real" mother or father?

"If you read the history of adoption you will discover that initially, there was no shame, no secrets and no pretense.

"In the mid 20th century, as you mentioned, adoption became attached to the 'sin' and shame of sex outside of marriage. It also became a mega-billion-dollar industrial complex with people so desperate for a child they are willing to pay tens of thousands of dollars to obtain one. That's as natural as Botox injections, facelifts, augmented breasts or butts...except that the money in child adoption feeds baby brokers - many of whom are far less than scrupulous. The money your parents and others have paid to obtain a child supports - albeit unwittingly - corruption and child trafficking, including kidnaping for adoption.

"Along with 'unwed' pregnancy being taboo, stigma was also attached to infertility in the past. The paying customers in adoption were thus catered to by sealing adoption records beginning in the 1940s so that adopters could pretend the child was born to them. Falsified 'amended' birth certificates gave the legal seal of approval to the lie, listing adoptive parents as the parents 'of birth.' Many evolved adoptees are fighting against the secrecy and lies that keep them indentured - contractually grafted to someone else's family tree. (see #FlipTheScript), read blogs like the Declassified Adoptee, and books like those of Jane Jeong Trenka.)

"Adoptive parents are not 'fake' and are more often than not considered Mom and Dad because they are in most cases the only parents a person has ever known. But they are NOT your real parents! Denying that fact or becoming uncomfortable when people raise that question is ignoring that the King has no clothes!

"I hope that you can overcome your fear that facing your reality might hurt the parents who have raised you and make you appear 'ungrateful.' Your very real, genetically connected kin - your roots, your heritage, your lineage - are important for you to learn about for more than just your real authentic medical history! Whose genes will you pass on to your own children some day?"

Mari Steed, US Coordinator at Adoption Rights Alliance and Co-founder, Committee Director at Justice for Magdalenes, was also moved to reply to Fritz, adding some very relevant aspects to the discussion:

"What's important to remember here is that Simone's narrative, as well as and that well as that of Angela, is are uniquely their own. It is ... those narratives are adoptees' to tell - not the media, not John Q. Public, not even the parents who raised or birthed them [emphasis added]."

Steed also points out that each adoptee is unique and not all 6 million agree. In fact another adoptee, identified as Penni J, commented:

"It's interesting how differently people interpret similar situations. I'm also an adoptee and have gotten that same question my whole life about my 'real mom' and 'real family.' I've always known the questions were about my biological family, and it's never once occurred to me that the person asking was implying my adoptive parents weren't my 'real' parents. ... Now it just all seems so silly and annoying when people get all riled up about a word that people just naturally say. Even more annoying when it's coming from adoptive parents and they start listing off all the things they do that makes them the 'real' parent ... I'm always screaming on the inside 'No s***!! That's what EVERY SINGLE PERSON DOES when they decide to parent!' ..."

"It is also worth noting that Simone Biles was raised in-family: she knows her biological roots. The vast majority of those adopted in closed adoptions, especially those of us adopted intercountry, do not. ...

"Apparently this insecurity over "real" or "not real" parentage has translated into a Chicken Little mentality that the sky might well collapse if we were afforded the simple dignity of access to a piece of paper that recorded the very public event of our birth...Despite that the Internet and ease of access to DNA testing/matching have well and truly quashed any quaint notions or myths of 'privacy' or secrets and lies.

"How about we deal with that stigma rather than squabble over what constitutes a 'real' parent, and leave the latter debate in the hands of the person to whom it most matters: the adoptee?"

In the future, when Simone Biles name is googled, may all that is remembered of her be her great gymnastic feats and bringing Olympic gold to America. May we all calm down and stop being so hypersensitive and defensive about facts that are accurately reported and also stop sensationalizing past facts that are better left private or at least described, as Shannon Biles said, with a bit more class.

"Many children were not removed from mothers or fathers unfit to parent, but from people who were coerced, underempowered and underclassed. People who were forced by religious or societal stigma or shame, or poverty, into losing their children."

Celebrities who find themselves in the media spotlight have repeatedly asked for the paparazzi to lay off their children. The same is true for athletes thrown into public display. Their families didn't ask to be scrutinized because of their athletic relatives' achievements and their privacy should be respected. Simone did not overcome addiction or any other disease. Nor did she "overcome" her mother's.

May all who are adopted, and those who for whatever reason suffered the loss of their child to adoption, be left to describe their experience for themselves and may adoptive parents, grandparents, step parents and parents who were denied the opportunity to raise their children all share in the joys of their offspring's lives without having to compete for their "realness" or having their names dragged through the mud. Every adopted person has two sets of parents. May no one's birth reality be denied, discarded, dismissed or diminished out of fear of the unknown or societal pressures or sheer ignorance.

There is an old very popular anonymous adoption poem entitled "Legacy" that deals with the contributions of the two sets of parents every adoptee has. It ends with the words: "Heredity or environment - which are you the product of? Neither, my darling - neither. Just two different kinds of love." The truth, and how this poem should end is: Both, my darling BOTH!

May one's biological roots be celebrated alongside the family in which they were reared. Neither nature nor nurture exist in a vacuum. They are of equal value, equal importance and need to be treated with equal respect and honor, as we give to all extended family and ancestors.