At many big banks, customers say they want out. But with Simple, a new kind of free online checking account, there is a two-week waiting list to get in.

At this Internet-only bank replacement, there are no fees and no minimum balances. There are also no branches or paper checks.

While many banks like ING and Ally Bank, which both offer free online checking, have moved in this direction, Portland, Ore.-based Simple is trying to do things a little bit differently.

"[We do] the mental math you try and do when you log in at traditional banks," says CEO and co-founder Josh Reich.

At Simple, customers still get a debit card, but the website and mobile app help account holders track and manage spending in real time. That means that customers are far less likely to do things like overdraft or make a late payment, Reich says.

Reich's goal in creating Simple was to eliminate all the "gotchas" and confusions that help big banks rack up billions in overdraft charges and other fees. He also wanted to include all the nifty functionality of smartphones -- like photos, tagging and mapping -- into the way people actually use and spend money.

"I'd come to the United States for tech innovation," Reich, who is Australian by birth, said. "Working on Wall Street, I could see all the great technology happening, but how little of it got to Main Street."

Simple works like this: Account holders put money into various categories, with some earmarked for spending and others earmarked for bills. Simple will tell you how much you can "safely" spend at any given time, before you start dipping into money earmarked for other priorities. The platform notifies you with instant text-message updates to your phone.

Customers can also use the mobile app to do things like turn debit cards on or off, and tag purchases to show which category their cost fell into.

To be sure, Simple is not actually a bank, and customer money is held in FDIC-insured accounts at a partner bank. The company makes money from interest and transaction fees.

To build his banking concept, 34-year-old Reich drew on his own frustration with banking and his background as a software engineer. Simple only offers checking accounts at the moment, but may expand in the future, Reich said.

Reich came up with the idea in the summer of 2009 after leaving his job as a software engineer at a Wall Street investment fund earlier that year. With a partner, he spent the better part of 2010 working out of his basement in Brooklyn, N.Y., to design how the Simple accounts would function. Then, in October 2011, he moved the Simple headquarters to Portland, where the cost of living was lower and he could hire more engineers and customer support employees. The first accounts were open for business in early 2012.

So far, people are liking Reich's approach. Around 35,000 people have signed up for accounts since Simple launched less than a year ago, according to the company.

One drawback is that the platform has no real savings option, which means account holders might have to open accounts with other financial institutions to create a long-term savings plan.

While Simple isn't the only place to offer free checking, the new bank-like service comes at a time when customer frustration with corporate banks continues to simmer after Occupy Wall Street -- and people become more comfortable with the idea of banking without a branch.

"We never want to profit from customers not understanding their finances," said Riech. 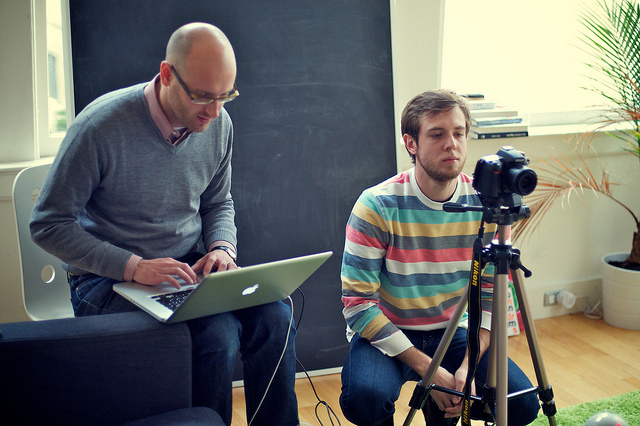