We have a tendency to lionize mankind's mind-bogglingly complex inventions. It's why we teach our children about the Alexander Graham Bells and Thomas Edisons of the world, and scour the Internet for every little iPhone rumor we can find.

But sometimes, it's the simple technologies that truly change the world. Think of what pasteurization did for public health or what mechanical clocks did for, well, time. These unheralded inventions maybe don't appear incredibly complicated at first glance, but they nevertheless improved the lives of countless people.

So what are the little-known technologies that hold the power right now to transform the world for the better? We decided to find out and give them their due.

1. Chewing gum that fixes your teeth

The problem: Nearly 4 billion people around the world suffer from untreated oral diseases like cavities and gingivitis.

The solution: "Sweet Bites," a chewing gum that is enhanced with xylitol to clean teeth and prevent disease. Not only could the invention help the world make strides in oral health, but its creators also hope to have entrepreneurial women sell it in poor communities, helping spur economic development.

2. A mouth guard that can detect concussions

The problem: Detecting a concussion is difficult, and unknowingly allowing athletes to play with one can cause a lifetime of brain damage.

The solution: Mamori, which is Japanese for "protect," is a mouthguard with built-in sensors that can send alerts to players and coaches when a collision is intense enough to cause a concussion.

The problem: One in four hospital patients in America gets sick just from being in the hospital, according to the Centers for Disease Control and Prevention. Despite the fact that hand washing reduces these cases of illness by up to 40 percent, there are few systems to ensure that hospital workers consistently wash.

The solution: A new tool, SwipeSense, aims to revolutionize hand sanitizers by making them portable and connected to the grid. Hospitals can monitor their staff's use through an app and ensure that far fewer people contract preventable sicknesses inside hospitals. 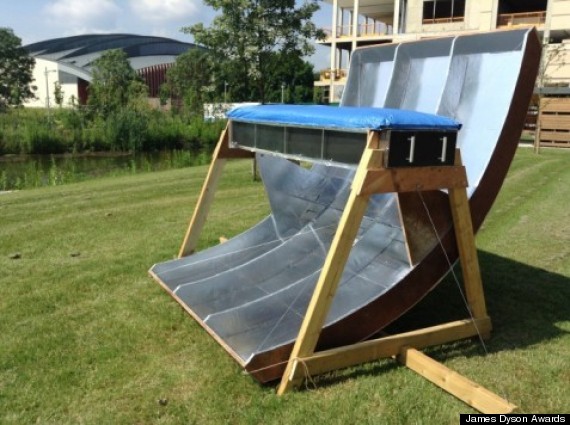 The problem: Cooking in the developing world often requires large amounts of costly fuel and creates harmful smoke as a byproduct.

The solution: The Infinity Bakery and other similar solar ovens aim to reduce disease and save energy by offering an affordable, sun-powered cooker to developing communities. The oven, which concentrates the sun's rays, is made from recycled oil drums, wood, bamboo and clay, so it can be produced locally and quickly.

The problem: Nearly 1 billion people lack access to clean and safe water, according to the Water Project, a nonprofit that focuses on water issues.

The solution: Portapure, a five-gallon water filtration device, can take dirty water from a lake or stream and turn it into clean, drinkable H20 -- without the need for purification tablets or electricity. The device can provide 3,000-5,000 gallons of drinkable water before it needs a new filter.

6. Water pipes that monitor their own leaks

The problem: We lose between $12.5 million and $92 million worth of clean drinking water every year in the U.S. due to leaking pipes, according to a 2005 study by the American Society of Civil Engineers.

The solution: "Smart Pipe" technology, which is still in development, would use nanosensors to monitor leaks in public water systems, making our water use more efficient. If brought to scale, this type of innovation could help communities detect leaks when they occur, and fix them early.

The problem: Even though packaged foods are labeled with nutritional information, we often have no idea what's in the food we eat while dining out.

The solution: SCiO, a pocket-sized spectrometer. The device would measure the calorie and chemical content of food so that a person could essentially scan any food or drink and know precisely what's in it. The tool recently raised more than $2 million on Kickstarter.

8. A shower that reuses its own water

The problem: Showers waste a tremendous amount of water and require a huge amount of energy. Every year, 1.2 trillion gallons of water are used to shower in the U.S. alone, according to the EPA.

The solution: The OrbSys shower promises to reduce water use by a whopping 90 percent and energy use by 80 percent. The OrbSys recycles shower water by pumping it through a filter in a closed-loop system, and the clean water that comes out of the filter only needs to be reheated minimally. The device could result in dramatic water and energy savings if used on a large scale.

The problem: Biking to work or school requires a lot of psychical strain and isn't realistic for those needing to wear business attire or travel long distances.

The solution: Smartwheel is a motorized bike wheel that can be used on any existing bike. Replacing one of a bike's wheels with a motorized one would effectively eliminate a lot of the downsides of bike commuting: the physical effort, the time constraints, the varied terrain. The wheel can allow a bike to reach about 20 miles per hour, and it can also synch up with a smartphone to protect against theft and monitor the rider's speed and distance.

10. Packaging made from mushrooms

The problem: Plastic packaging and materials are petroleum-based and usually not biodegradable, causing a host of environmental and health consequences.

The solution: A new company called Ecovative says it has the solution to the wasteful and environmentally destructive use of plastics in packaging, insulation, and cars: materials made of agricultural byproducts and mushrooms. "There's a great future in plastics," goes the iconic quote from the 1967 film "The Graduate." Now may be a great future in, of all things, mushrooms.

The problem: Our bodies generate a significant amount of heat, but this energy is lost into the environment. We are in need of alternative energy sources that don't create toxic pollution.

The solution: Clothes that charge your phone may sound like a fantasy, but this technology is actually in development. Power Felt is a fabric that can harness body heat to produce electricity. A small piece of the fabric could could allow a person to charge a cell phone just with his or her body heat.

"The idea is to make something that isn't intrusive and just gives people an extra boost," David Carroll, the inventor, told Business Insider.