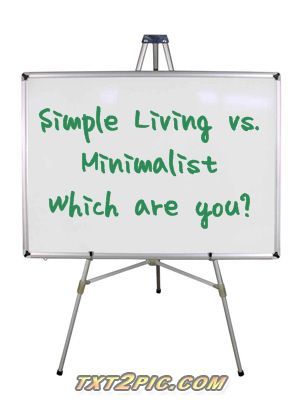 With all the talk of minimalism and simple living on the Internet I am still constantly surprised to see how many interpretations there are. I'm also seeing lots of confusion. That's probably because we are all usually attracted to certain authors who are writing about the subjects without concern about what those labels really mean. And while I've stated numerous times that I don't believe myself to be an "expert," I do feel the topic is not only valuable -- but deserves explanation and exploration.

So what's the difference between simple living and minimalism? On the surface I believe there is a noticeable difference between the two topics regardless of who writes about either of them. From my interpretation -- minimalism is a catchall phrase for people who are most attracted to paring down to the minimal in their life. Words and phrases frequently used by most minimalists are de-cluttering, getting rid of stuff, anti-consumerism, austerity, rules about the best way to do it, quantifying what qualifies, eliminating as much as possible, etc., etc. The one word that comes to mind when talking minimalism is "discipline." Now I'm not saying there is anything wrong with any of those terms whatsoever, just that a focus on them individually doesn't make me passionate about jumping on the bandwagon.

In addition, many of the writings and suggestions that come from minimalism blogs seem to suggest external solutions to creating the lifestyle. I've also noticed that a large number of the "minimal" followers are typically younger and male. Whether those men were attracted to minimalism out of necessity due to the economy, or just like the idea of being footloose and free, remains to be seen. I believe the women who are attracted to minimalism tend to be those who recognize that such a lifestyle is a practical and obtainable approach in this day and age of overconsumption.

On the other hand, simple living embraces life more gently, slowly and internally in every way. Those who seem most attracted to simple living want to integrate it in every area of their lives. Instead of focusing on eliminating, austerity, lists and de-clutter, those into simple living make a habit of identifying the things that add the most value and joy to their lives and letting the rest go. Words and phrases more commonly used by those into simplicity are: freedom to be yourself, natural, living intentionally with authenticity, caring for the environment, sustainability, balanced living, self-sufficiency, slow food movement, etc. The one word I think best describes simple living is "contentment." Again, none of these phrases are better than any others. What they do offer is a more holistic view and approach to life.

Another observation is that those attracted to simple living appear to be of an older generation. Perhaps after a person has worked and lived for years under a misguided approach to consumption and the typical consumer lifestyle in our country, there is an awareness of how that approach seldom brings true happiness or peace. There also seems to be more of a family or community approach to simple living rather than the more rugged individualism frequently observed in the minimalist camps. A perceivable downside to simple living is the observation that some who practice simple living become so nutty-granola that they sell everything, move to a commune, and garden for the rest of their lives. Trust me, that doesn't appeal to me either!

Now before anyone goes postal after my attempt to define the two, let me be clear that there are plenty of minimalists who are into simple living -- and quite a few simple living folks who embrace minimalism. It's not a cut and dry separation and I don't mean to imply that. Instead, the focus of this discussion is to ask people to think about the "why" behind their own personal approach.

Why? Why do I think it is critical for us to explore the depths of what minimalism and simple living mean? Mainly because if a person is attracted to one or another of these concepts without realizing how it truly fits into their world view, then chances are the minute they move into a house next to the "Jones's," or get a big raise, they will fall off the wagon and be right back where they started. Until anything we do becomes a vital aspect of who we are, rather than a hobby or a fad that seems cool at the time, we are susceptible to reverting back to our former habits.

Plus, if there is some part of us that is attracted to any of the qualities found in minimalism or simple living, then chances are good that some part of our psyche/soul is looking for fulfillment in a new direction. Yet without foundation for why we do things, and the meaning and gratification of the action, we can get overwhelmed with the details of the how, and wander back to our former unfulfilled lifestyle.

Actually, I happen to believe minimalism and simple living are two sides of the same coin. Just like the yin and yang found in Taoism, they compliment and strengthen each other by blending the external with the internal. As two parts of a whole, the concepts of minimalism and simple living are constantly evolving and changing as the need arises. Taken alone, they are never as powerful or effective as when connected.

In the best-case scenario, I believe the discipline of minimalism and the contentment of simple living evolve into an interconnected whole. When we recognize that sincere efforts to de-clutter and reduce debt eventually lead to a sweet satisfaction about things that truly matter, we are living the best of both simple living and minimalism. And in so many ways that is exactly what smart living is all about.