"Never! Not in a million years!"

That's what a lot of people say when it comes to public speaking. And when you see those who are killing it on stage, you wonder "What the heck is wrong with me?"

Public Speaking tops number one in the so-called 'fear list', in fact, beating fears of death, flying and insects. There's something amazing about having eyes on you. That also shows how much we're self-conscious.

The moment we're in front of the crowd, let alone on stage, we start to think at the speed of lightening: "I'm gonna mess it up. I'm messing it up. They're judging. They're laughing at me. Oh, I'm so gonna make a fool of myself. My voice is shaking... choking... now... they're noticing it..."

So what makes those who are so at ease on stage or in front of the crowd so confident?

Ever since I was young, I've always been the one to put my hand up in class. Not sure if it was the rebellious nature in me or if I was just really up for it. Last time I checked, I was still half introvert.

The video here was taken about 14 years ago when I represented my native country, Burma, to participate in the first ever debate in the country in English. English wasn't my native language nor in the country. However, my parents are fluent in English and I grew up watching them speak. I remember standing in front of the mirror mimicking the words to pretend I was speaking in English.

And throughout my corporate career, I was really lucky to have a chance to work with nearly ten thousand people. I happened to lead and run workshops, trainings and seminars too. Even then, every time I found myself in front of the crowd, I'd get a shaking feeling like I'm going to choke and collapse. But I always manage to get through it, most of the time never missing a point. Most surprisingly, I leave the crowd thinking I was really confident and I knew what I was doing. 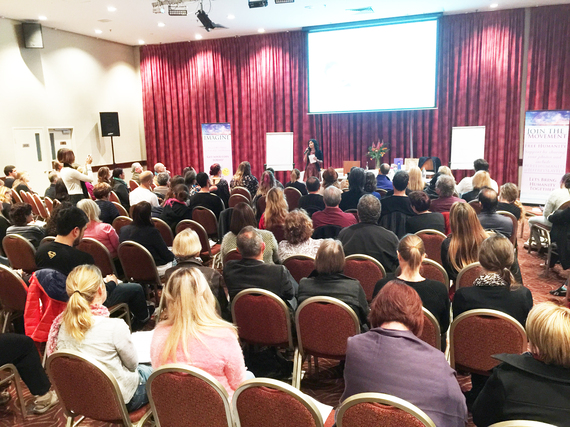 So I decided to sit down and decipher what I did to get through and deliver these talks like a pro (although I'm not).

Here's what I found;

1. Belief
Belief is a concept or an idea that we hold dear to be true. Belief is the most powerful thing one can have. Look at what belief can make people do; people would start a war or go on a hunger strike for something they believe in. Now, if belief can make people go to such extreme, belief can also definitely help people stand in front of the crowd and deliver a good talk.

Someone once told me that I have 'bucketload of belief'. That's true. I've always believed in myself. I once thought that's how we're supposed to be.

However, I realised what I was doing right.

Instead of focusing on things that could go wrong, I always daydream (in other words visualise) myself on stage delivering a talk like a pro with smiles on people's face, leaving them wow-ed and feeling extremely pleased with myself. When I've done that I-don't-know-how-many-times in my head over the years, the idea has really sunk deep in my subconscious.

Before I knew it, it's become my belief.

2. Laugh at myself
I also notice that I'm able to laugh at myself even if I sound like a complete idiot at times. I realise the fact that I'm perfectly imperfect and that I'll make mistakes at times. I also realise that there's no failure, only feedback.

So those times when I forgot the lines or stumbled on words, I gave myself a pat on my back saying, "You did a good job. At least you put yourself out there."

3. Breathe
Our breath keeps us alive. If one breath can bring someone back to life, our breath can get us through anything. Even public speaking.

I don't know if it's the meditation practice or the subconscious memory of watching how great speakers deliver amazing talks, every time I get anxious, I breathe.

4. Blurring out
When you're delivering a talk, you need to connect with the audience. But if you're too nervous, when you see a million eyes focusing on you, you freeze. This is the technique I learned in my early days although I'm much more comfortable to make real eye contact now and make audience participate.

When you're in front of the crowd, blur your vision but make sure you connect with everyone. Although you're not able to see their facial expressions, which can encourage or discourage you within split seconds, you'll still be able to see who's where and connect with them.

Try it. It works.

5. Story
People will tell you to practice and tell a story but when you're out there, you forget because you're telling them a story. So instead, tell yourself a story.

Create a mental timeline in your head as you practice. That's what I do. It's like this horizontal timeline I'm visualising as I talk and I go through the story one event after the next. I enjoy it and I'm more confident that way. So when I'm enjoying my talk, my passion shines through. That makes people want to listen to you.

As you're visualising and telling a story, people will start to do the same too and before you know it, they're already involved in your story.

There's no right or wrong. This is what works for me and it's simple. Try it. Give it a go.

These are simple tips but I urge you to give it a try. Let me know in the comment box below how it went for you.

Arabelle Yee is the former Clinical Psychotherapist turned Business Coach, who has a passion for business, psychology and spirituality. She's worked with nearly a thousand people over her ten years of career with top global organisations coaching and traning.

She's the founder of this Collective Alchemy and she also provides 1-1 coaching to her private clients.