I cut my thighs the other day, deliberately. On an image editing website. It was easy to slither off a bit of my thigh, soften out those facial wrinkles and add some colour to my hair. So I did. Because, well, thanks to technology we can.

When did life come with a friggin' stylist and a hashtag?

This morning I spent an hour. Yep, a full sixty minutes plus. Just scrolling through Instagram before I got out of bed. Rather than reaching for the man next to me who wasn't there I reached out for my phone when I first woke to play compare and despair with Instagram styled versions of the lifestyles of random people, some I call my friends.

Only they don't look like my friends. Younger versions, browner versions, bluer eyed versions, thinner versions, but versions all the same. Not like the unfiltered, unairbrushed, unstyled friends with grey roots, cellulite and crows feet I have the joy of hanging out with in person.

If I woke up feeling great then I clearly wasn't feeling it by the end of it.

Oh I am far from innocent. See said thigh cutting above. I know if you shoot pics from above my loose chin rolls won't be seen, that if I use Camera + profile filter then my wrinkles won't be seen either. This obsession with showing lies for others to envy has taught us all how to be Herb Ritzz with a smartphone with a bunch of vacuous hashtags that don't save the world no matter how much we want to, and I know we want to.

When it becomes vanity at the cost of humanity then we have a problem. But what if we hash tagged the truth?

Or even better, took pictures of the truth. No filters, no styled backgrounds for our selfies of beaches, hotels, sunsets, no make up, or what about, no selfie at all? 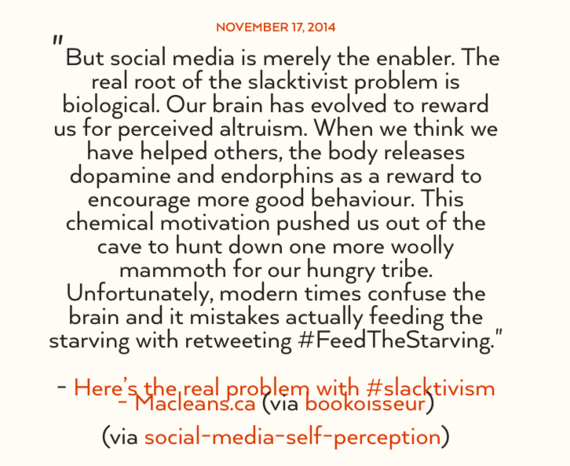 Of course there are those of us who have to use social media for work. My ski writing business relies on social media to showcase ski adventures on offer around the world and promote my website where my writing is found.

I rarely post selfies on there but when I do you can be guaranteed it's not a bad one. Though I am clearly not realizing the age of my face is the same age of my body and no amount of brushing, manipulating or filtering will change that reality. It can change other's perception, yes, but reality no.

It is like the Botox I have on occasion put in my face, it gives the impression of holding back time (or looking surprised at the idea I can) but it doesn't actually do it. My birth certificate stays the same.

What it does do is create another lie, that I get visually better with age in a world where only youth matters when the truth is I get visually better with money so I can pay for artificial enhancements and airbrush apps. Then I taunt you with that visual so that you can compare yourself and think, why does she look younger than me when we're the same age? When really I should just tag #botox and we can all breathe a sigh of relief.

Social media is at it's worst, a curated lie. As one of my community once posted "Instagram, letting you show the best of who you wish you were since 2010." Which made me snortle.

But it is all good laughs until someone gets hurt and the impact of social media can be more damaging than we may realize. A study in 2014 of two groups aged 11-18 revealed a direct link between social media and an increased desire to undergo cosmetic surgery. Think about that, these kids are 11 to 18 and already hating their bodies.

While 81% of girls say they would like to see natural photos of models, 47% of them say that it is the bodies in fashion magazines that they aspire to. Sigh. And a third of children worry about their appearance because appearance is the leading cause of bullying.

It's not just kids either. 83% of adults do not feel body confident and a recent Dove Survey showed that 25% of women say their idea of beauty is shaped by social media.

At it's best, visual driven social media like Instagram is funny and inspiring. When people are truly brave and show the truth, connection occurs. That's why Humans of New York is an international hit.

That's also why comedy writer @celestebarber has almost 750,000 followers and you don't. Because we relate to ordinary Celeste living an ordinary life trying to replicate the insane postures and styling of celebrity images. She busts the myth that we can look like them 24/7.

Though that argument doesn't hold true when you look at the numbers following @kendalljenner (55.5million) when 1.5million "like" her just for wrapping shoe strings up her legs. At least she didn't tag it #savetheworldoneshoestringatatime. 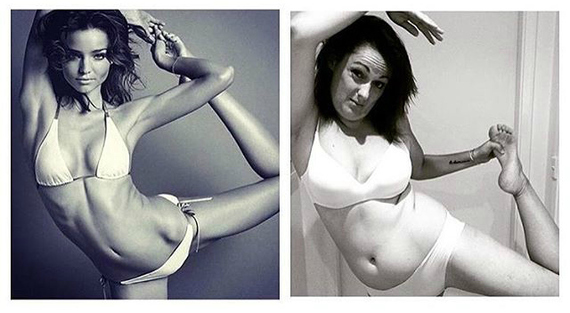 @msrachelhollis posted a pic of herself with a post baby belly and stretch marks on Facebook. In a bikini. Egads!

She received 17,000 positive comments from women, just like her. Women who were pleased to see a real version of themselves. It inspired Rachel to then create a video documenting the connection that happened from one moment of truth in a world gone mad with white lies.

Australian "instamodel" Essena O'Neill famously quit instagram, deleting 2,000 photos and re-captioning others to show her 500,000 plus followers that "social media is not real life." Could we love this brave, honest girl any more? 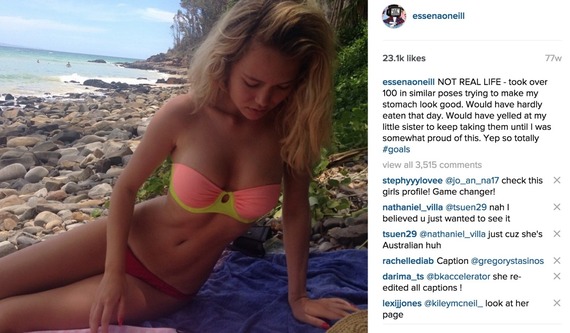 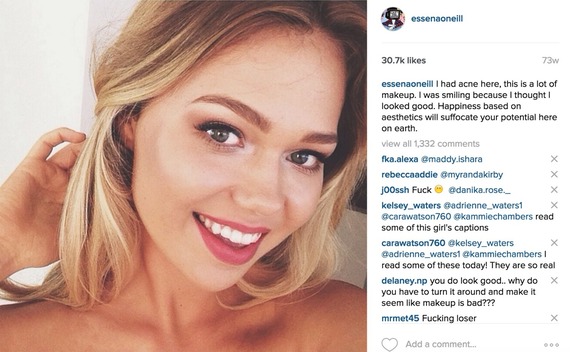 Model Chrissy Teigen knows she has a job to do but she gladly busts the myth of perfect lighting, makeup, stylists and airbrushing by posting pics of her stretch marks and inspiring the #loveyourlines hashtag for other women to do the same. Literally making others feel good about themselves. 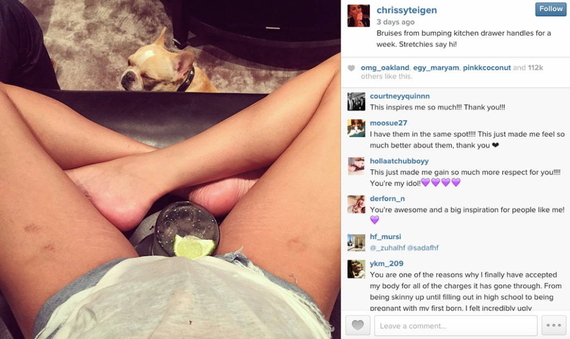 Of course I am complicit in this social media manipulation. I have stood with friends perfecting the perfect scene and light for their next snapshot (not unlike Instagram husband), I have shown photos of me having a great time when the truth was I was dying inside and then there's that thigh cutting issue.

What is truly sad in this please like me world is that we are competing for the gaze of strangers. When we would attack those same strangers in person should they dare look up our skirt or at our cleavage on a train. What on earth are we thinking?

We live in a world where digital friends are collected when friendship should truly be a privilege not a right. We try to connect with images on Tinder and we sext images of our bodies as though they are not connected to our soul.

As women we do each other no favors by buying into the beauty myth. Oh I know it's hard not to. I struggle every day. Every single day. Even when I am at my fittest I still have doubts about myself and I have spent years writing about this issue.

But if we define our self worth by how we look or how we look in comparison to others then we have no self worth. In a world taunting us with fake imagery it is hard not to blame ourselves when we don't measure up because envy looks through a microscope. It is equally hard not to fake our own imagery in response.

We owe it to other women, our daughters and young girls to show the truth both inside and out as often as we feel brave enough to. Because no one remembers how many digital "likes" they got in life when they are on their death bed.

If I didn't need social media for my work I would honestly just get rid of it. In the meantime I say try a smile from within over a filter #findyourmeaningoutsideamirror.

Or throw in a "realie" in every three to five selfies because change takes time and when all this self truth exposure gets too much just follow @lifeofpikelet and thank me later.

You can find more of Rachael's writing on her blog elephanttruths.com.