While Singapore is the only Asian city in the overall top ten, Beijing is considered the best place for personal finance.

Melbourne, Houston and Madrid top the list of the best cities to live abroad according to previously unreleased data from the third annual InterNations Expat Insider 2016 survey. With more than 14,000 respondents, it is one of the most extensive studies ever conducted to explore the general living situation of expatriates. Ranking 5th out of 35 cities in this year's survey, Singapore has positioned itself among the top places for expats. It is the only Asian city that makes it into the Top 10 in the overall ranking. All other destinations achieve below-average results, with Hong Kong and Kuala Lumpur making it to 23rd and 24th position out of 35. Beijing and Shanghai do anything but well, coming in 26th and 31st place respectively. However, Beijing outperforms all of its competitors in financial terms and secures the first place in the Personal Finance Index. The latest InterNations survey finds that nearly three-quarters of the respondents in Beijing (72 percent) agree that their disposable income is more than enough to cover their daily needs. 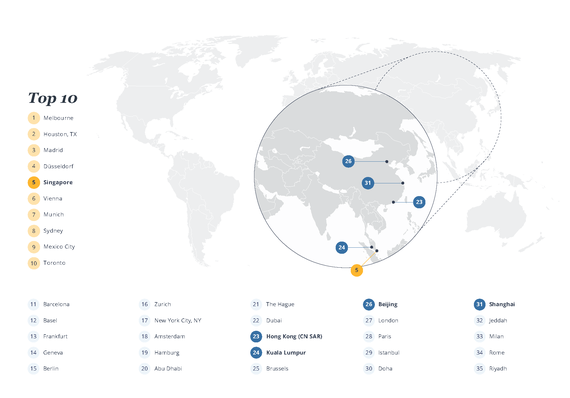 Singapore Leads the Asian League
The majority of respondents (89 percent) does enjoy living in Singapore, agreeing to be quite satisfied with their life abroad in general. The city leaves its Asian competitors far behind with an eighth place in the Quality of Life Index. What is more, it even makes it the very top in the Safety & Security subcategory: over 80 percent consider the city's safety very good. This is a more than significant difference to the global average of only 38 percent saying the same about their city of residence. Occupying the tenth place worldwide, Singapore also does quite well in the Ease of Settling In Index. This result is especially due to the Feeling Welcome subcategory, where the city comes in ninth place. For example, 73 percent of the respondents say that it is easy to get used to the local culture in Singapore. Among the other Asian cities, only Kuala Lumpur does better with regard to settling in, ranking 8th out of 35.

Beijing Top, Asia Flop in Personal Finance
While Singapore does very well in the overall ranking, the metropolis narrowly misses the Top 10 in the Personal Finance Index, coming in 12th place. The respondents in the other Asian cities do not seem to be extraordinarily satisfied with their financial situation, either -- with one major exception that makes it even to the top of the list for personal finance:
•Beijing comes in first place in the Personal Finance Index, with almost three-quarters (73 percent) saying that they are generally satisfied with their financial situation. However, the respondents seem to be less satisfied when it comes to the cost of living in China's second-largest city, ranking it at a mediocre 16th place in this respect.
•Shanghai does even worse and comes in 21st place out of 35 cities in the Cost of Living Index. In fact, not a single respondent in Shanghai is completely satisfied with their living expenses.
•Expat life appears to be considerable more affordable in Kuala Lumpur: the Malaysian capital triumphs in this index, coming in at a very respectable 6th place, with 68 percent rating the cost of living in general positively.
•Quite surprisingly, Hong Kong only makes it to a sub-par 22nd place in the Personal Finance Index and an even worse 23rd place in the overall ranking. Still, 57 percent state that they are mostly satisfied with their present financial situation. Unsurprisingly, the metropolis appears in the Bottom 5 of the Cost of Living Index (33rd place). More than seven in ten respondents (71 percent) are not happy with the cost of living in general. As many as 90 percent also consider it difficult to find affordable housing, which significantly exceed the global average of only 37 percent.

Poor Work-Life Balance in Asian Cities
Despite the rather negative results when it comes to finance, about 71 percent of the respondents in Hong Kong say that they are overall satisfied with their job. According to the InterNations survey, all respondents agree, though, that the Asian cities struggle when it comes to a good work-life balance. This affects Beijing, Shanghai, Hong Kong, and Singapore, which all are found in the below-average ranks of the respective subcategory. Although Kuala Lumpur is not among the worst-rated cities regarding work-life balance, it merely achieves a mediocre 17th place out of 35 destinations. In the Malaysian capital, just one in ten expats is completely happy with this factor, as opposed to 27 percent in Melbourne, the number one for work-life balance.