Most performers can't pin-point exactly when their lives changed, but Christina Perri remembers the moment clearly. The star, who headlines the upcoming 25th-Annual Dinah Shore Weekend, says her "Cinderella" story began at 8pm, June 30, 2010 -- when breakthrough hit "Jar of Hearts" aired on TV's So You Think You Can Dance. 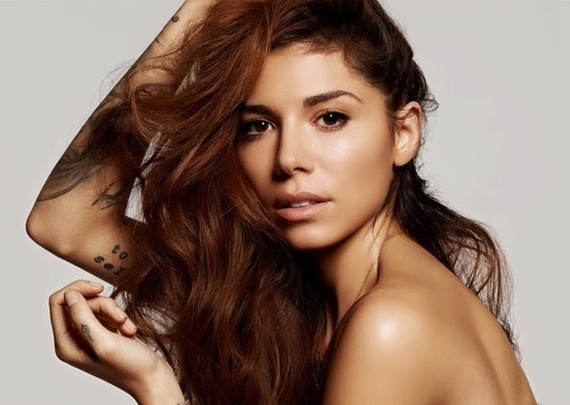 "I was very much a normal girl with a Facebook," shared Perri during a recent telephone interview promoting new single "The Words" and her 2015 Dinah performance, "I remember my Facebook blowing up and thinking 'What's happening?' By midnight, I was the No. 1 most-Googled thing in the world."

Perri's demo version of "Jar of Hearts" immediately sold 220,000 copies. A literal overnight sensation, the unsigned artist went from working as a Los Angeles waitress to making national television appearances within a week. Her first three performances ever were for The CBS Morning Show, The Tonight Show with Jay Leno and a live return to SYTYCD. Three weeks later, she signed with Atlantic Records.

"I actually never waitressed again," recalled Perri, who peforms Friday, April 3 at The Dinah, the world's biggest lesbian party happening April 1-5 in Palm Springs, CA. "They had to cover all my shifts until they found a replacement."

While it was something she always dreamed of, Perri says it happened much faster than expected. Reflecting on the experience, she was utterly unprepared.

"I got a lot of grey hairs. I'm not going to lie, I was absolutely terrified," she stated, "I was very shy and nervous. I really don't remember too much in detail, because it was such a whirlwind, and I didn't stop. I went for 27 months straight."

When things subsided for the new star, she returned to her L.A. home, "collapsed and cried for a week." That's when everything started to settle in, she says.

"I had all these really cool pictures, dresses and memories, but they were all so scattered," she related, "I wasn't sure I wasn't dreaming. It was bananas. Now in hindsight, I look back, and it was amazing! I'll never forget it."

Nearly five years later, the "whirlwind" has returned. A more seasoned Perri is making the rounds again, promoting her latest album Head or Hearts, released in April 2014. She's performed new single "The Words" on The Meredith Vieira Show, Live with Kelly & Michael and during a Valentine's Day broadcast of Good Morning America, among others.

"The first time I did this, I thought I was going to die," shared Perri, reflecting on the difference a half-decade in the industry can make, "I had no idea how intense it was going to be. I had no learning curve."

Though still a "kind of outrageous" experience, the singer knows what to expect now -- and is happy fans are hearing the new song. As an artist best known for emotion-laden, piano-tinged ballads, Perri describes "The Words" as one of only two "really, really happy" tracks in her repertoire (the other being "Be Mine Forever").

"I always have to tell audiences, 'I have been in love. It was fleeting, but I've been very happy at moments in my life,'" she said, "'The Words' is one of the songs that came out of those moments."

"Truthfully, it's a song about falling in love and being absolutely terrified," Perri explained. "Even though it's delicious and wonderful when you both know how you feel, before you say how you feel, you're terrified. At least that's my experience."

The star tapped actor Colin O'Donoghue to play her love interest in the song's haunting music video, which has already racked up an impressive 2 million YouTube views. In it, O'Donoghue -- best known to viewers of ABC's Once Upon a Time as "Captain Hook" -- struggles to express his feelings to the female lead played by Perri.

"It can be a very scary thing," she says of falling in love, "'The Words' is about that moment right before you open up and become very vulnerable and tell the truth...Then you jump, and Lord knows what's going to happen, but it's exciting."

For more information about Christina Perri, visit her website.

Once Upon A Time Lesbian Lesbians Christina Perri Queer Life