Ysaye M. Barnwell, a member of Sweet Honey and the Rock, is chanting to me and 33 others at the Omega Institute for Holistic Studies where I am taking a weekend workshop with Ysaye and Anthropologist/musician, George Brandon.

Burnt out from work, I needed a retreat: something relaxing and close to New York, so I chose the Omega Institute, a wellness and personal growth institute in the Hudson Valley on hundreds of lush green acres. Omega offers 350 weekend and week-long workshops plus free yoga, healthy food, plenty of places to sit and listen to the birds, and a lake to swim, kayak or lie near in a chaise or hammock. 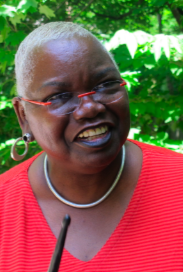 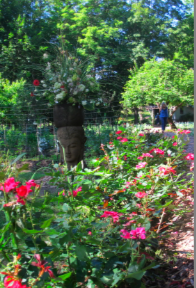 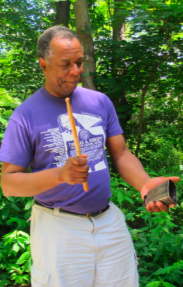 I decided to try "Building a Vocal Community". I'm not a singer, but it sounded fun - especially when I read that I'd be part of a large and welcoming choir where no experience was necessary, and I'd have the opportunity to find my own voice.

With each repetition, we sing more and more tightly until we actually sound like a choir. The music reverberates in the large room and I understand what community means: we have no age, no color, and no gender -- we are all one voice.

African slaves, George tells us, were forbidden to speak in their native tongues so they sang songs to create a rhythm for their grueling work. Sometimes they held secret religious services where they sang in multi-part harmonies about struggle, overcoming, and hope. The songs were called spirituals. Ysaye begins to sing and we join in:

Whatever stress I brought with me to this weekend workshop is beginning to disappear. It's hard to feel tense when I'm singing and our voices fill the room like a kaleidoscope of sound. We move from spirituals, rooted in the Old Testament to Gospel -- Christian music rooted in the New Testament. Quartets played a big roll in Gospel, George says. The four singers would dress in the same colorful clothes and make the same movements in a performance with tight chords and harmony. This was how Doo-Wop evolved.

Ysaye teaches us a Gospel song with a four-part harmony:

I tap my feet and clap, feeling joyous and free, the way I felt as a kid when I sang in Girl Scout camp.

I think of the Baptist Church in Birmingham which was bombed on a Sunday in 1963, in which four young girls were killed - I wipe away my tears as Ysaye begins:


Images come to my mind of the 1965 Selma to Montgomery marches when police with Billy clubs and tear gas attacked 600 civil rights marchers. "Everyone stand up and link arms," Ysaye says. "Do you know why they linked arms? Because if they just held hands, the police could bust through; but if they linked arms, the police couldn't separate them." We keep our arms linked as we sing:

Again, I see images - now, of marchers attacked by dogs and clubbed by police. I remember the sit-ins in which Black people sitting at counters remained quiet and expressionless as White trouble-makers poked and slapped and beat them to the ground. I remember the pictures of Ku Klux Klan members setting fire to homes with their cross torches. And then I see more fires -- of burning Vietnamese people running from their villages after a napalm attack. I think of American soldiers dying in Iraq and Afghanistan and terrorized women mutilated by the Taliban, and all I can think about is man's inhumanity to man.

When we break for lunch, I walk through Omega's flowering garden to lunch. A Sweet Honey in the Rock song plays over and over in my mind: