While everyone else is watching the steadily increasing carbon dioxide levels reach and exceed 400 parts per million (0.04 percent of the atmosphere), another group of scientists have been fretting over the Second Greenhouse Gas: methane. 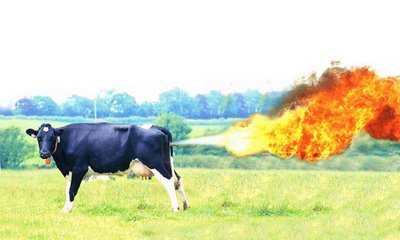 A big part of the methane problem! (Credit: BiasedBBC)

Methane (CH4) is a greenhouse gas and contributes to climate change. Colorless and odorless, methane makes up only 0.00017 percent (1.7 parts per million) of the total amount of atmospheric gases. This may seem like a very small amount, but one kilogram of methane has more than 20 times the greenhouse impact to global temperatures as the same amount of carbon dioxide. That means if we put carbon dioxide and methane on the same scale, the 400 ppm of carbon dioxide compares with only a measly 24 ppm of methane. The current value of 1.7 ppm for methane is not much right now, but give it time!

Carbon dioxide has increased by 31 percent since 1750, but methane has increased by nearly five times that amount. More than two-thirds of this methane increase can be attributed to human activities. Long-term atmospheric measurements of methane by NOAA and NASA show that the build-up of methane slowed between 1999 and 2006 to about 17.7 ppm due to reduced industrial emissions and drought in wetland areas, but that changed in 2007. Since then, researchers have seen a growth in methane that has pushed it to 18.3 ppm by 2013. 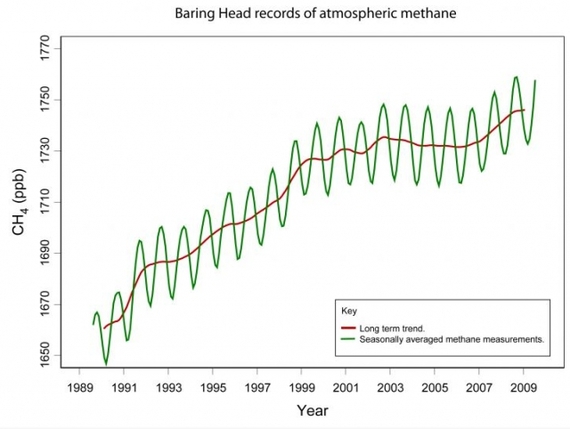 Methane in the atmosphere. (New Zealand National Institute of Water and Atmospheric Research; and NOAA).

The increase since 2007 does not seem to involve Arctic warming, but rather increased methane loss from a combination of fracking activity and wetland outgassing . This is all likely going to change in the next decade. There are concerns that the near-future releases of Arctic methane will accelerate global warming.

The highest methane concentrations in North America are found in Lac La Biche in northern Alberta on the lower edge of the Canadian wetlands. Atmospheric methane there is 20 ppm with spikes up 25ppm. Scientists say the methane is being emitted by warming subarctic and tropical wetlands risk in high carbon content peat.

A recent study published in the journal Global Change Biology examined 71 wetlands across the globe and found that permafrost is being transformed to wetlands called fens which leak methane into the atmosphere. It is expected that as the Arctic permafrost continues to warm due to the steady increase in global temperatures, a point will be reached where methane trapped in the permafrost will be more quickly dumped into the atmosphere. Currently this rate is about 3.8 million tons/year.

On a more distant time horizon, the warming of the Arctic ocean could also release the deep water stores of methane hydrates which are currently stabilized into solid form by the very low temperatures near the ocean bottom. Currently, this production rate is about
17 million tons per year. That's already about 25 percent of the emissions from domestic gas production and transmission in 2012. A recent
USGS assessment of the risks of a major atmospheric Hydrate Bomb places the probability as being very low. "...most of the world's gas hydrate deposits should remain stable for the next few thousand years. Of the gas hydrates likely to become unstable, few are likely to release methane that could reach the atmosphere and intensify climate warming."

Whether the Arctic release of methane will greatly change the pace of global warming in the next 100 years remains a subject of current research. Some recent studies at MIT suggest the impact will be substantially less important than man-made methane contributions, and contribute less than 0.1 C to global warming by 2100. 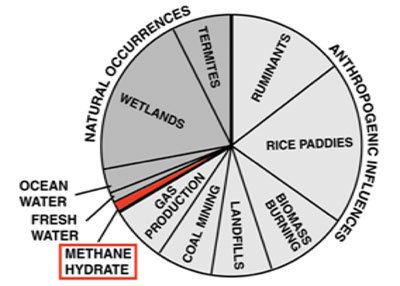 The figure shows that two-thirds of the current methane production comes from human activity. The production by cows (yep, they fart methane) and other ruminants, together with rice paddies account for about half of this human-related production. For natural sources, nothing can beat termites (more farting!) and the decay of wetland biomass!

So the bottom line is that methane may eventually become a significant problem for climate change and specifically global warming, but its time has not yet arrived. We will definitely do much better gaining some kind of control over our net carbon dioxide production which has now driven the atmospheric levels to a place (400 ppm) they have probably not been in about 24 million years according to a study in 2000. A more recent 2011 investigation places this horizon a bit closer at about 5 million years ago. Ice core data also indicates that not once in the last 800,000 years have carbon dioxide levels been this high.

What Should You Make of This?

We are now in completely untested territory and still conducting a planet-wide experiment with the attitude that perhaps small changes are all we need to make so we can keep our flat-screen TVs and our trips to Starbucks for coffee while avoiding coastal inundation. The writing is already on the wall. A recent 2014 Gallop poll indicates that 25 percent of the public are skeptical that global warming is occurring and most Republican politicians deny global warming science is valid and are reluctant to act.

Meanwhile, insurance companies have long-since taken the quiet lead and embraced what scientists have been saying for decades. The next time you try to get flood insurance in many coastal communities... good luck with that!

In the end, public and political opinion about global warming will be irrelevant. You may not believe climate change is occurring but you will have to live, work and pay out larger sums of your paycheck to directly subsidize your discordant belief within an economic system in which this belief is a dramatically expensive one to have and to act upon.