Let's start with this thought:
All relationships (intimate) in your life will end -- period.

Caveat: with the exception of one (if you are lucky) but that will also end in death (sorry, but it's true).

This perspective should help; it helps us move away from the feeling of failure. Therefore, what matters is that you walk away from each relationship having learned something. Whether it's learning something about yourself, your behaviour, your values or something about a particular situation, do's and don'ts -- it doesn't matter.

Instead of focusing negative energy on fault and cause, looking for the lesson helps us move forward.

Of course, I'm not suggesting this thought (everything will end) changes or should change your attitude to relationships -- on the contrary.

Love as you love, be who you are, take risks, be vulnerable....

But the thought should (and I hope it does) change your attitude to breakups....you didn't fail.

I repeat, all relationships will end, let the thought liberate you, you didn't fail, you just came to the end.

I say this because it's often the unsaid and I believe it is very important. We are in a society where being single (particularly as a woman) is seen as either failure or being selfish.

I'd come to expect the inevitable questions "and what about you? When are you going to/ why haven't you settled down/marry/kids/fallen in love_____?"

Fill in the blank as you wish

My answer did not change but how I felt about this question certainly evolved...

I had spent most of my adult life in relationships. In those five years of being single I'd covered all available options from short intense, long content, confused addictive, long distance, short lived, I tried them all. What did I learn?

I can categorically tell you now that your marital status, single, co-habiting, engaged, married....does not determine or dictate your happiness -- period. There is no co-relation. (Although, it does seem to be a the stick by which others measure your happiness).

Some of my most miserable moments have occurred when I have been in a relationship.
There are as many unhappy people in relationships as happy and as many happy singles as miserable. Being in a 'relationship' does not automatically equal happiness (as most couples would like to have you think).

I'm not saying the opposite either. I just want to quell the fears invoked by the tone of the inevitable question.

Not having found the one does not mean you have failed.

If anything you have promise and opportunity (unlike the many I know who have compromised or acted in haste, fear or desperation). I don't want to push your thinking to the other extreme either (all happily married people are actually miserable) because this also isn't true.
Our happiness is more complex than are marital status and it's good to be reminded of that.

As I said, my feeling about this question (what about you? when are you going to settle down? etc.) changed. Okay, I expected it from parents, aunties, older people etc. but hearing it from my peers, from my friends, it just really disappointed me

I mean, what are people hoping to achieve by asking? Did they really want me to go into a monologue of self defense? (because it's boring for me and surely for them). Or worse still, a monologue of self-pity? Or that once they had pointed out the seemingly obvious I would react surprised: 'My god you are right! What have I been waiting for!? Here I have been all this time fighting wonderful men away, how foolish of me! Thank you so much for showing me the error of my ways'

What did they actually achieve? Well, for sure they got a repetitive answer whereby I had to convince them and reassure them that I was ok, that actually I was even happy. They then would proceed to try and 'fix me', but are you getting out there enough? Have you tried internet dating? Maybe you need to meet friends of friends? Oh what about John!? Jack!? Oh there's that guy, can't remember his name but he's single! (Because being single was now the only criteria).

Everyone wants to help.

Between the suggestions come the pitying looks and the clichés.
All I wanted to say, actually scream, was I'M NOT BROKEN!
And I meant it. It suddenly had become my job to make them feel better about "the situation" which was my life. It was a bit ridiculous. 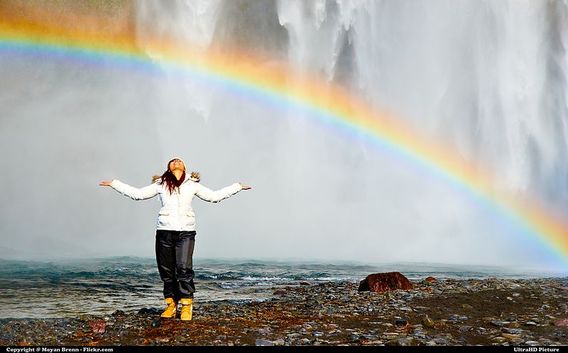 "Jodie, it's important to give in a relationship, but you can't give everything, you need to keep just enough in order to be strong enough to move forward if/when the break up comes"

He was right, at least I believe he was, perhaps you disagree. I don't mean hold back on being you, but rather don't forget YOU. Remember who you are and keep that essence safe for when you need it.

Remember you are not perfect and neither are they.

In all relationships there are going to be things you love about that person and things that irritate you and vice versa.

It's important to look at the things that aren't so favourable and ask yourself - are these things important to me? Are they things I can live with / compromise on / put up with? Or are they deal breakers?

This will help you know if the relationship is worth pursuing. For example, imagine selfishness is something you can't stand and generosity a trait you really value. Your new boy/girlfriend appears to be quite 'tight' with money, you might be able to overlook it at the beginning, in the first flushes, but isn't it going to rear its ugly head later? It's on a different level from 'I hate the way he folds the laundry.'

It's a good habit to get into, being able to recognise the things that matter and those you can let slide; things that don't deserve your energy. If the way he is cleaning the dishes is driving you insane, take a step back and ask yourself what's really annoying you?

Don't forget, he/she'll be weighing up similar things in their own head. There are lots of things about you that piss him/her off as well. You're not the high judge here and you're not the only one letting things slide...

My last point on relationships for now is a biggy, it's a question. People always say "you need to work at relationships, they don't just happen.

"Everything isn't always rosy" or words to that effect.

I totally agree, actually I would take it further and say:
Love is not enough

So...most of us agree that we need to work hard at relationships.
But I ask you this -- how hard is too hard? Where do you draw the line?

One in particular stands out. When I was 26, living in London, I met and fell in love with a Brazilian man, we started a relationship which then became long distance and lasted 2.5 years.
For anyone who has ever had a long distance relationship, I'm sure you'll agree, one of the most challenging types of relationships ever. So passionate, so many highs and lows. I knew it wasn't going to be easy, I knew it would require extra hard work and I knew I loved him more than I had loved anyone. But, like everyone, I struggled. Love wasn't a guarantee.
When I wavered I asked myself the question -- how hard is too hard?

I also had a further complication, I put 100 per cent into everything I do, I think I can make anything work -- a great but dangerous attitude at times.

You need to work hard at relationships. I was working hard, I was making it work. Then, after time, it slowly dawned on me, I realised 'I' is not a relationship. It was just me trying to make something work. It's not a relationship when in the end only one person is trying, it's just you, trying...

Next time you're working hard to make a relationship work.

Take a look and see how hard your partner is working. That should help you with your answer

Remember, all relationships in life will end, maybe after weeks, years, decades, death, but they all end. Things ending are not 'failure', it's life.

You can focus on The End, or what is actually in front of you which is just another beginning.