What happens if the Supreme Court strikes down the "individual mandate" in the health care reform law?

This may be the best news about health care in years. Because ever since Republicans convinced the Obama administration to drop the "public option" in the Affordable Care Act, health reform has been in trouble. True, most Americans favor many of the provisions of Affordable Care Act. But the overall plan rests on forcing you and me to buy insurance from the same companies that have been driving up the costs of health care all along -- the same companies that have been finding creative ways to avoid covering needed care, shifting costs on to patients, and endlessly increasing premiums and out-of-pocket expenses for all of us.

Forcing all Americans into a failed system is bad policy, and it's not just President Obama's opponents who say so.

What the Doctors Ordered

When the Supreme Court agreed to hear a challenge to the Affordable Care Act brought by 26 state attorneys general, one of the supporting briefs came from an unexpected source -- a group of 50 doctors who believe that single-payer health care is the way to cover everyone and contain costs. As a model for a revamped health care system, they point to Medicare, which covers millions of seniors while devoting just 2 percent of expenditures to overhead (compared to as much as 16 percent for private insurers).

In spite of all the fear about government involvement in health care, Medicare is enormously popular; in a recent poll, two-thirds of Americans oppose changing Medicare to something more like private insurance. In the Medicare model, as in Canada's single-payer system, health care providers are in private practice, but the government acts as insurer, covering everyone. The money for the program comes from payroll taxes.

This model is just one of a variety of ways that industrialized countries provide universal coverage; only the United States does not yet offer universal coverage at all, and the impact of our fragmented, privatized approach ripples throughout the economy and into the lives of families that face bankruptcy and exclusion from needed treatment. 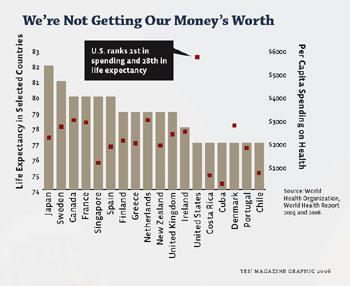 While we in the United States spend far more on health care, per person, than any other nation, we're way behind other wealthy countries when it comes to our actual health. The residents of 26 other countries -- all of which spend less on health care than we do -- can expect to live longer, on average, than U.S. residents. In a recent study of 19 industrialized countries, the United States came in last when it came to averting preventable death. Researchers say that amounts to more than a 100,000 avoidable deaths each year.

We devote 17.4 percent of our economy (by GDP) to paying for health care (or $7,960 per person each year), and still leave millions without coverage. In contrast, the French spend 11.8 percent of GDP on health care (or $3,978 per person) and cover everyone; the French live two years longer, on average, than Americans, and have better health by all key measures.

If we're spending so much for poor results, where is all the extra money going? Private, for-profit health insurance companies spend big on overhead: covering the paperwork and arguments about who will cover what, finding ways to avoid covering people who might require costly services, disputing charges from health care providers. They spend money on marketing and on lobbying Congress, federal regulators, and state lawmakers. They pay dividends to shareholders and they pay executives six- or seven-figure compensation packages. No wonder premiums keep rising.

None of these costs are incurred by Medicare or other national insurance programs.

Some argue that patients are better off with competing insurance companies because that gives them a choice. Perhaps this is true of a patient who spends many hours required to read the small print in competing insurance plans, producing spreadsheets to track the multiple variables, guessing what sort of coverage they and their family will need in years to come, and hoping that they made the right choice when an unexpected accident or illness means their life depends on the bet they made. On the other side, insurance companies have battalions of lawyers and adjusters making bets about coverage, co-pays, and deductibles -- coming up with ways to cover less.

Asking each of us to choose among competing plans is like playing against the house in a casino -- it might seem as though you're getting choices among slot machines, but really, the odds are stacked against you whatever choice you make.

So the doctors who are calling on the Supreme Court to strike down the individual mandate are on to something. Instead of locking us in even more tightly to an inefficient private insurance system, which has built-in incentives to take more of our money and do less for us, they argue we should switch gears. We're spending $200 billion more per year than we would need to under a single-payer system, they say. We pay more out-of-pocket than other countries, and the Obama Affordable Care Act wouldn't fix that.

What do Americans Want?

In poll after poll, a majority of Americans have expressed support for single-payer health care or national health insurance. This is true in spite of the near media blackout on this topic, and the failure of most national politicians to even consider single-payer as an option (the Obama administration and Democratic leadership in Congress excluded single-payer advocates from the key summits and hearings leading up to the passage of the health care bill).

In Massachusetts, which has had time to try out policies very similar to those in the Affordable Care Act, over 5 percent of the population remains uninsured. And, according to the doctors' brief, local initiatives calling for single-payer health care passed by wide majorities in all the Massachusetts districts where they were on the ballot.

Vermont has adopted a single-payer health care plan, and the California Assembly twice passed single-payer, only to have it vetoed by the governor.

Single-payer health care, in short, is far more popular than the political establishment likes to admit -- while requiring individuals to purchase health coverage from private insurance companies is wildly unpopular across the political spectrum. According to a recent poll, only a third of Americans favor the individual mandate, but 70 percent favor expanding the existing Medicaid program to cover more low-income, uninsured adults.

Here's something to ask yourself: if you're on Medicare now, would you give it up to move to a private insurance plan? If you're not now covered and you could sign up for Medicare today, would you?

That contrast offers a good starting point. We don't need to assume that our health care policy must be designed to maintain the health-industrial complex and their lobbyists in the manner to which they have become accustomed. Instead, we can expand Medicare to cover more and more age groups, until everyone is covered. We could all then have access to a program that keeps overhead low, is wildly popular among its clients, and is similar to programs in Europe, Canada, Japan, and elsewhere that have excellent records of cost containment, universal coverage, and great health outcomes.

So what happens if the Supreme Court overturns the individual mandate or -- as now seems possible -- rejects the entire package? Such a move could turn out to be a great boon to those who doubt the wisdom of relying on private, profit-focused insurance companies to cover us when we get sick. It could offer us the opportunity to get the sort of proven universal coverage we can count on.

"The Single-Payer Train Has Left the Station"
Wendell Potter, a health insurance executive-turned-critic, on what Vermont's new law could mean for American health care.

The Road to Real Health
Health care's just part of the picture. Five policies that would be good for our health, happiness, and wallets.