In her sexy, stormy, spiritual memoir, Honey in the River, Marsha Scarbrough explores the contemporary relevance of ancient African wisdom teachings, wrapped around a love affair with a married African shaman. The mythology and metaphysics of Ifa, the indigenous religion of the Yoruba people of West Africa, is woven throughout her fast-paced tale that combines spiritual text with descriptions of her experiences in rhythm, dance and deep trance. As she blends archetypal drama and epic soap opera, Marsha reveals and befriends her personal shadow. 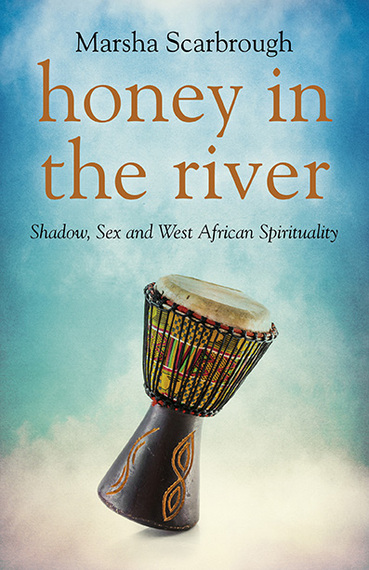 I interviewed Marsha about her book and what it was like become so deeply involved with a shaman:

Q: Is this book about voodoo?

MS: "Voodoo" is a mispronunciation of the name of a West African religion that Americans encountered in Haiti. "Voodoo" became a pejorative misnomer for what I experience as a sophisticated system of spirituality. This book is about Ifa, the indigenous religion of the Yoruba people of what is now Nigeria. It is not black magic. In fact, it is not magic at all. Ifa practitioners are clear that what they do is a focused spiritual practice that creates healing by balancing light and dark energies. In the book, I do encounter darkness when someone puts a curse on me, and Ifa practice brings me back into balance. In my experience, this practice is primarily joyful and life-affirming.

Q: Why did you, a middle-aged white American woman, get interested in an obscure, indigenous African religion?

MS: I am a seeker. I studied Buddhism. I trained in martial arts. I practiced dance therapy. I studied healing with a Native American medicine man. When I discovered Ifa, my curiosity was triggered. I was always seeking the next level of spiritual experience, and Ifa promised to take me there.

Q: Who was your teacher?

MS: My teacher was a traditional healer from Nigeria, called a babalawo. He was a diviner as well as a master drummer and ceremonial leader.

Q: Who are the orishas?

MS: Orishas are the deities of Ifa. They were actual historic persons who ascended to divine status after their deaths in the distant past, like Catholic saints, but each orisha also embodies the energy of a natural element. For example, Oshun, the orisha who represents the energy of love and eroticism, is a beautiful woman, but she is also the river. Orishas are also psychological archetypes. We all have all the orishas within us, although one may dominate our behavior.

Q: So the Yoruba people worship many gods?

MS: No. In this mythology, Oludumare is the energy of creation, perhaps equivalent to the western idea of God. Oludumare is the intelligence above all. It's not a being. It's simply energy. The orishas are merely intermediaries between Oludumare and humans.

Q: One of the myths about "Voodoo" is that its followers worship the devil. What did you find out about that?

MS: Ifa does not have the concept of the devil...or of evil. When things go wrong, they are considered out of balance and need to be brought back into harmony through ceremony. One of the orishas, called Eshu, has goat horns and hooves. He is the trickster who lives behind our head and pushes us into self-sabotaging behavior. He is similar to the Shadow in Jungian psychology. When Christians see his image, they project their concept of the devil onto him, but in Ifa practice, once he is honored, he becomes our helper and the messenger to all the other orishas.

Q: Your teacher was polygamous, and you fell in love with him. Were you in a polygamous relationship?

MS: I was open to exploring polygamy because monogamy had not worked particularly well for me. Much of the story of Honey in the River revolves around the difficulties of trying to practice polygamy. It was a worthy experiment. I think we need to look for alternatives to both monogamy and polygamy. I don't have answers, but I did learn that honesty is essential in all relationships.

Q: Did the betrayals and tragedies you describe in Honey in the River leave you disillusioned with Ifa?

MS: Not at all. Ifa is a beautiful spiritual practice. It takes a sophisticated approach to balancing the complexities of human psychology. It uses ancient rhythms to realign our vibrations. It offers practical healing through joyful dance and affirmative chants. Quantum physics has revealed that everything, including us, is simply energy in motion. We are vibration. We are music. Ifa keeps people of all colors in tune with the harmonies of life.

Q: Can we hear that music?

MS: You can. Some of the rhythms and chants I write about in the book can be heard in the Honey in the River Soundtrack available on itunes, Amazon music and CD Baby. Listening along adds another level to the reading experience.