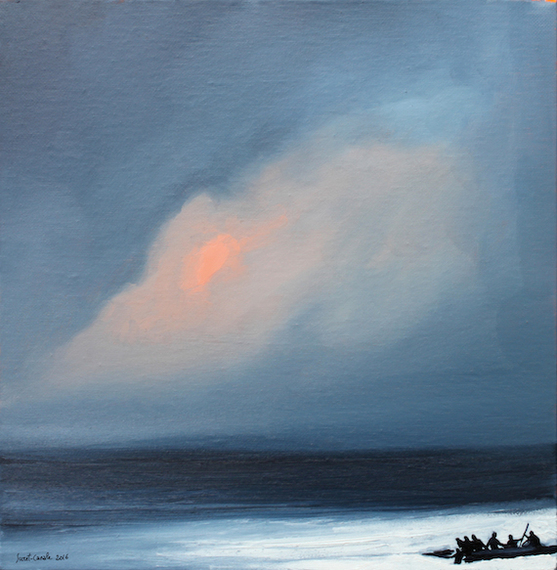 This is a new painting by French artist Michel Suret-Canale. It is called "Les Migrants," or "The Migrants," and I think that it is a great painting. It derives its subject and imagery from the ongoing tide of extraordinarily dangerous migration toward Europe across the Mediterranean Sea. The migrants in this painting appear as tiny ciphers in the bottom right. They are nearly framed out of the composition altogether; the stern of their raft or boat is clipped by the edge of the canvas. They are mere specks, but their drama is still legible. Two of them grapple with a pole or an oar. Another three lean over, trying to help somebody or bodies who have fallen overboard.

The rest of the image is a spectacular vista of sea and sky. The migrants occupy a lone silvery bright patch on dark waters. The horizon is slightly indistinct where it merges with the sky, which is a field of bounding, gloomy cloud. One cloud stands forward from this field, glowing orange where it catches light from a sun situated at the viewer's back. Uninterrupted by the comforting scale of structures on land, there are no small elements in this painting. The sea is vast, the cloud gigantic, and the sky jaw-dropping in its immense verticality.

The scene arises from the migrant crisis, but because I do not do politics or current events, you're on your own with what you think about this work in that context. Like all great art, "Les Migrants" transcends its immediate subject and circumstance. It is so bare and so elemental that those tiny migrants no longer stand for themselves alone. They stand for you and me as well.

Here is a story this painting tells me: Man, full of hope in his ambitions and confidence in his preparations, sets out upon his journey. Only when he has gotten far enough from shore that he can no longer return does the awful scale of the world become clear to him. He quails in fear. The vessel he built, which seemed so clever and sturdy, proves woefully inadequate to the task. 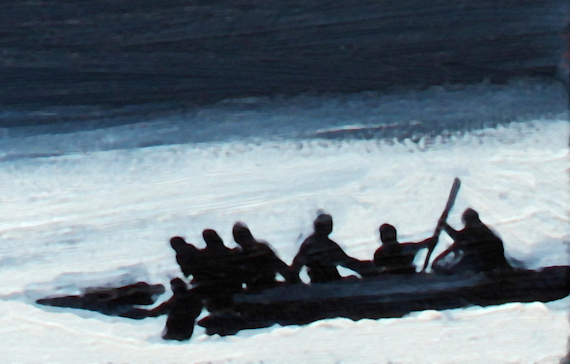 A storm overtakes him, and he huddles in his pitching boat and weeps. He begs to be spared. He prays. In fact he prays a true prayer for the first time, because for the first time, he sees the world as it is. When he walked on land, that was the land of God he walked upon. He crosses now God's sea. The sky is God's, the storm is God's, and the sunlight he devoutly prays for is God's as well. Man has awakened. And God, whom Man now sees has never ceased in actively participating in the world, hears his prayer and answers it. The rain ceases, the winds die down, and the choppy seas grow calm. A break in the cloud pours light down to the sea, and the dark waters shimmer and shine around Man's puny boat - around his boat alone. Looking up, he sees blue sky and sun, framed by the remains of the storm. He was nearly drowned, but now he is saved. Another sheet of sunlight stretches across the sky and illuminates one cloud. God has staged this cloud, and this sheet of sunlight, to speak to Man. In the orange glow of a day ending in peace, the Almighty says to Man, "I have heard you, and I carry you in My hand across the hazardous span of the tremendous world. The world is mine, and you are mine as well." 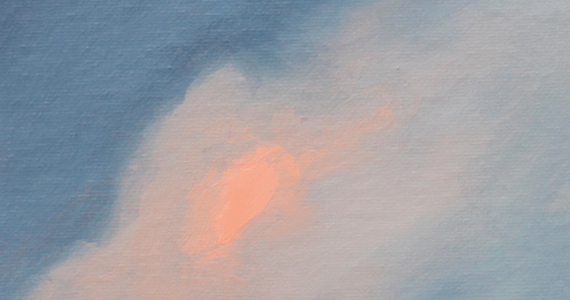 All these things, this painting says to me. But it also tells me a second story. In this second story, Man also sets out upon the unmapped waters of a giant world, full of hope and confidence. In this story, Man too encounters a storm, and hunkers down in his miserable boat, gritting his teeth and squinting into the spray. After some interminable period, short or long Man does not know, the storm passes. Man hesitantly stands back up. When the calm persists, he tidies his boat, settles himself back into position, and resumes rowing, heading in as nearly the direction he intended as he can make out. Light breaks on the part of the sea he crosses. Over there, it is still dark. Here, it is bright. Above, a drama plays out among the clouds. Over there, they are still dark. Here, one is suffused with a magnificent glow as the day moves on from late afternoon toward evening. 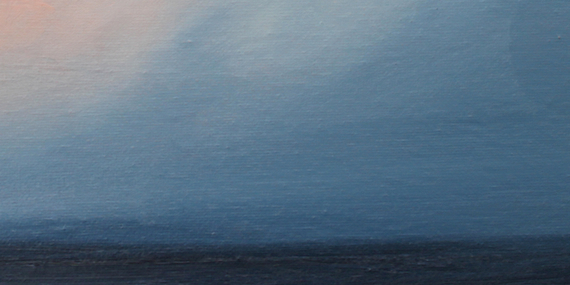 Is there a meaning to the light and dark of the sea and sky? Perhaps, or perhaps not. Man cannot tell. The light on the cloud is not for him, nor the light on the sea. Man slips from one region to the next, unnoticed by the giant forces roaming an indifferent world. Today they saved him, and tomorrow they may destroy him. If he wants to find meaning, he will have to find it in himself, and express it by force of will. Even so, his passage through this immense sea has taught him that he is a gnat, a poppy seed; whatever he can accomplish, it will be comically small when set against the scale of reality.

This great painting tells me both these stories, and in telling them to me, reminds me of something my best friend said maybe twenty years ago. He said, "For every trivial truth, there is an opposite that is false. But for every great truth, there is an opposite that is also true." I couldn't figure out what he meant by this, and I'm not convinced he could either. But I have considered it, on and off, ever since he said it. I think part of what makes Michel Suret-Canale's painting great is that it has room in it for one thing which certainly must be true, and for its opposite, which must also be true. By this means we recognize that we are in the presence of a great truth, and not a trivial one.

In spending the past few days meditating upon this painting, I think I have also made some progress with my friend's koan. Consider this. On the one hand, we have the law of non-contradiction: as phrased by Aristotle, "one cannot say of something that it is and that it is not in the same respect and at the same time." And on the other hand, we have the claim for a great truth that it has an opposite that is also true. My new hypothesis about this problem is that the contending truths, the seeming contradiction, are evidence that the system in which we are trying to fit the truths is too small. We are collapsing distinct categories until the two opposed truths seem to speak about the same aspect of the same thing. But they do not. We just don't understand yet what we are talking about.

For me personally, it makes a great deal of sense to speak of a world in which the spirit of God moves upon the face of the waters, and to simultaneously speak of a world arced by gargantuan forces and mechanisms which are completely indifferent to the hopes and fears of inconsequential Man. My sense that both models accurately describe the world tends to suggest to me that neither is enough. There may be some idea which is sufficient to name the world, but we have not yet imagined it.

This painting, "Les Migrants," does not espouse theism or atheism, but it is not agnostic. Rather, it is fully theistic and it is fully atheistic. What a vast space there is inside of it. It is like the world.

There is one further element I would like to bring to your attention which contributes, for me, to the greatness of this painting. It is to do with the style. This painting is simply painted. It might have taken an hour or three. Surely less than five. There is no great sophistication to its technique, and yet its simplicity lends it an eloquence which sophistication would deny it. It is not too simple to allow each element to speak. But it is scarcely more complex than that. The elements and the composition have the tremendous forcefulness of primitive art, art from the beginnings of religions and civilizations, or from the ends of them. This art does not express simple or stupid ideas, but it has no gilded rhetoric to pretty up its testimony. There is no distance between idea and image. Each image is true and cannot be other than true, because it was made by a helplessly honest and committed artist. All later artists, in some dark hour of doubt, lament the loss of this vital directness of expression. Suret-Canale has found some way back to it, as only a few artists emerging from ironic, self-aware eras are able to do.

This painting could wind up in a museum, but it does not belong in a museum, or a gallery. One is tempted to say that it belongs in a church, but though it addresses the fundamental topics churches are built to address, it is not quite teaching what churches teach. Suret-Canale has promised to paint me a second version of it, the first having sold the minute it was made public. I'll tell you where I plan to hang mine. I have an infant son. It is going in his room, where it can instruct and inspire him as he grows, and become a thing that he can never remember not having known.

Michel Suret-Canale online: http://www.suret-canale.net/
With thanks to my koan-spinning friend, and to playwright Mac Rogers, whose "Universal Robots" got me thinking again about the nature and phrasing of prayers.