The other night, I watched another woman lift my sleeping child out of a car seat and carry her to my doorstep. As she came towards my waiting arms, I willed my face not to register the burn in my stomach, to assume an expression that said to my ex's girlfriend, "This is all well and fine and thank you for being so kind to my kids."

I don't think I pulled it off.

If you have children, then you know how I felt. If not, imagine running into your mother somewhere out in the world and seeing her with another child you never knew she had. Perhaps she's tenderly patting this stranger's back, or you hear him call her, "Mom." This comes close to how I was feeling on the doorstep that night.

It's not that this woman seems bad for my kids at all. She seems great. And it isn't that I don't foresee her helping immensely with things like balanced school lunches or bedtimes. But my ex isn't one to move slowly in love, and within just a couple of months of meeting his girlfriend, he told me he wanted to co-parent with her -- a person I knew less than any babysitter I'd ever hired.

It's all just moved so fast for me. Sometimes, I feel a little like reaching for an airsick bag.

A few days ago, I was reading my daughters a bedtime book when my 3-year-old asked,
"Where's the other mom?"

The mother in the story was dead and I explained that the mom was in heaven.

"No, where's the other mom?" she persisted.

My mind raced. I began to make wild assumptions about my daughter's sudden preoccupation with having two moms.

Then her older sister pointed out that she'd meant a pretend mermaid mom on the preceding page, and I crawled back down off the ledge, tail between my legs.

Now if there's motion sickness that comes with all the change for me, the obvious question is: How is it for the kids? My ex and I have been fairly amicably split up since our girls were 2 and 5, a little over a year ago. We both see a lot of the kids, although at first, our daughters barely did any sleepovers away from me. But lately that's changing significantly as their dad moves into this new relationship and it no longer works to spend much time at his ex-wife's. These changes don't come easy to any of us, but that said, they aren't necessarily bad, either.

Through all the fast-motion action and the constant smell of the new, I try to remember to surround my children with warm light and love. I hope the stability of my and their dad's love will be all the ground they need. But my 3-year-old has been throwing tantrums on the physical and mental level of kung-fu lately, and I can't help but worry that all the change is at fault.

Read: I am at fault.

Then, I talk to a friend with a little girl the same age who's been having similar tantrums as my daughter's. They just moved to Argentina for six months, so of course my friend blames herself. "But what if this is the phase they'd be going through anyway right now?" I ask.
Children have been known to have these.

This, however, is not how guilt works, especially not mother-guilt. When mother-guilt drives, there are no other natural forces at work. When mother-guilt's in charge, it's in total control. It's odd, but there's a form of self-centeredness in all that guilt.

A few days later, I see another mom at school pick-up, Jeanette. She says her 3-year-old's been going kung-fu on her lately, too. My guilt finally begins to break. Maybe all the tantrums have really been just a natural phase. Then I think about Jeanette, who works a full-time job outside the home. I wonder if she, too, has mother-guilt driving her, if she ever worries she's to blame for the kung-fu phase. Of course from where I sit, she's so clearly not.

In my gut, and in my heart, I know all this self-blame serves little purpose. Clearly, we are all three of us just parents trying to perfect the balancing act of doing "What's Best."

I know letting guilt on the ride will only weigh it down.

After I see Jeanette, I let the kids play in the school garden for a while before herding them to the car. They chase each other with dandelions and the fairy-like puffs spread out in the sun. Their lightness is so like my little girls who float around in the same sideways rays.

I resolve to remember what they already know, to travel light, no matter what speed we go. 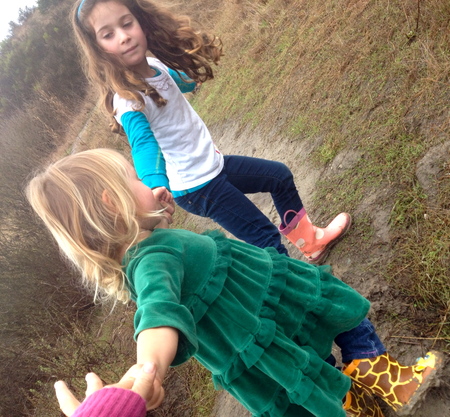 More:
Parentsadvice-for-single-parentssingle parentsdivorced parents
Newsletter Sign Up
Raise the kind of person you'd like to know
Subscribe to our parenting newsletter.
Successfully Subscribed!
Realness delivered to your inbox