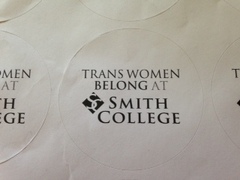 When I was the Transgender Specialist at Smith, a women's college, a female-to-male (FTM) transgender student said to me, "Smith doesn't have to worry about going co-ed; Smith is co-ed, because I'm here."

If only it were that simple.

In recent weeks, activists have used the pages of national publications to exhort women's colleges to consider as eligible any applicant who self-identifies as a woman. While this one-size-fits-all approach may seem both trans-positive and politically correct, it likely won't keep each all-female college, school, and camp aligned with its mission and constituents.

When asked recently for their policies on transgender women, the presidents of Barnard and Smith said they weren't sure yet. Theirs is the right, if less flashy, answer. The historical position of all-female spaces is colliding head-on with radically shifting notions of gender, but there is no one course of action that will prevent a wreck.

Both women's colleges and trans people are responding to a painful truth - that the world is an uncomfortable, often oppressive, sometimes traumatic place for those who want to veer outside the lanes of traditional gender norms - that's why women's colleges were created, and that's why transgender people, both transmen and transwomen, want to attend them.

Historically, all-female institutions have offered sanctuary from the pervasive sexism that deprived women and girls of education, power, and voice. Despite puncturing the boxes of male and female and recalibrating gender as falling on a spectrum, misogyny is still alive and well - and so is the need for female-only spaces.

I live this paradox personally. As a gender diversity consultant, therapist, and educator, I am a well-travelled tourist in all locales on the gender spectrum. While others' heads may spin when confronted with gender-bending, -busting, -switching, -affirming phenomena, I am unruffled (so to speak) in these situations. I believe in every individual's self-determination of gender.

At the same time, as a graduate of a women's college, former staff member at three women's colleges, and consultant to many girls and women's institutions, I drank the Kool-Aid a long time ago. I believe in the power and necessity of female-only institutions, savoring how they help girls and women find purpose, build confidence, and learn the value of female friendship and mentorship.

But if I believe that MTF transwomen are women and therefore belong in all-female spaces, does this mean FTM transmen are men and therefore don't? Or, if the whole point of gender activism is to accurately affirm that gender is a spectrum, then are women's colleges and girls' schools ultimately obsolete? If the persistence of sexism in our culture continues to provide the raison d'etre for girls and women's institutions, where do transgender people fit in?

The questions are thorny but far from unanswerable. A decade ago, I oversaw the process of welcoming female-born trans students to all aspects of Smith College life. From residence life and athletics to career planning and healthcare, Smith -- as well as many other women's colleges -- successfully negotiated that initial collision with changing definitions of gender.

While at times Smith seemed to be a magnet for negative media attention, ultimately the community found a way to learn and live together without undermining the fundamental character of the women's college. We provided trans-sensitive training, responded to the concerns of trans students and established a college-funded trans student organization. We altered transcripts and diplomas to reflect gender identity shifts and provided necessary changes in housing, locker rooms, and bathrooms - these changes institutionalized the acceptance and support of FTM students.

At the time, we knew that down the road and around the bend would be the next collision: applicants who had been assigned male at birth but now considered themselves female. In discussions with the admissions staff, we tried to avoid that most fundamental and perhaps unanswerable question, "What IS a woman?" With the states in control of gender markers and colleges attracting a global applicant pool, simple reliance on legal definitions of woman wouldn't work. My higher education clients have pursued different strategies, including taking no stance at all, issuing policies with clear limits, having policies with broad rules, or just closing their eyes and praying for mercy.

In the past, some of the most trying moments for women's colleges and girls schools have come when co-education is proposed -- then their very foundations seem shaken. When we first explored "what to do with" FTM students, it was the spectre of those moments that loomed large. Women's and girls institutions are hamstrung between the desire to be inclusive and the fear of diluting their fundamental missions. It's no minor quandary.

(Hopefully) few would agree with the Smith student who decided that his women's college had gone co-ed when he transitioned. However, some do fear that the inclusion of transwomen constitutes moving those gender boundaries just that much further, perhaps shaking those brick and mortar foundations at a level similar to co-education on the Richter scale.

At this point, many of these colleges and schools are feeling like a two-car accident may be turning into a pile-up. The successful inclusion of FTM students in the 'single-sex' experience is now, they fear, giving way to cultural shifts in the very definition of gender which may render it impossible to determine what is the "female" in female-only.

You can't pick up a newspaper, watch tv, read online news, or look at Facebook these days without being confronted with it. Transgender individuals have become empowered to live their authenticity. As the first marginalized population to come of age in the social media era, they have mobilized and organized rapidly, changing public awareness and attitudes at breakneck speed. The appearance of Laverne Cox, transgender actress, producer, and activist, on the cover of Time magazine this month offers a powerful message of how quickly trans acceptance, inclusion, and activism have taken root.

Now, a new challenge for all-female institutions is on the horizon. Increasingly, youth identify themselves without gender, or as gender-queer and gender-ambiguous. With over fifty genders to choose from on Facebook, youth often experience the categories of "man" and "woman" as outdated. Where will single-sex institutions land on the question of including those with no gender?

Further, transgender youth are coming out at earlier ages, more and more often with parental support and advocacy behind them. These parents of gender-nonconforming kids are fierce gender warriors, well-practiced in taking on powerful educational institutions in order to help their children. Watch out for them when they are looking for hospitable colleges for their kids.

Fundamentally, the case-by-case, crisis management, or wait-and-see approach of yesteryear isn't going to work anymore. Nothing short of a gender revolution is taking place, a cultural shift which challenges the intrinsically binary mindset of female-only institutions. There is no singular path that will fit the vast diversity of girls and women's organizations across the country. Each single-sex college, school, or camp must consider the changing gender landscape in the context of their institution's mission, history, values and priorities, stakeholders, and location in the marketplace.

It's time for girls' and women's institutions to move from reactivity to well-considered policy. Fundamentally, women's colleges were founded on the premise that women could, and should, think. Thinking, analyzing, reflecting, leading . . . this is what is required for them to stay true to their missions.