Getting out of bed in the morning is never easy, especially when the snooze button looks so appealing. So 19-year-old Sankalp Sinha created an alarm clock that bypasses this problem by giving the snoozer a shock.

Sinha, a student at India's Sharda University, came up with the idea for the singNshock alarm clock in 2008 when he got into the habit of waking up late every day for class -- something he calls "very frustrating."

"The shock button on the top is aluminum coated. When the user presses the button in order to stop the alarm, it conducts an electric shock pulse of a few milli volts triggering neurological functions," Sinha explains on his website.

The electric pulse, which is just enough to trigger neurological functions, is optional. Users do not have to be shocked out of slumber every day, if they don't want to.

Aside from the shocking snooze button, the singNshock also features a touchscreen interface and music player capable of storing up to 32GB of songs, notes Mashable.

Though the clock is currently just a concept -- all images are computer-generated renderings -- Sinha is looking for investors and manufacturers so he can begin production. He initially started his online portfolio with the aim of getting into design school, but since the singNshock is getting so much international attention, Sinha feels compelled to make it a reality.

"It doesn't matter where this will be sold, be it online or at stores," Sinha told the Huffington Post. What's important, he added, is that "customers are satisfied with this product."

Countless designers have attempted to devise the best system alarm clock system -- from the Android alarm app that won't stop ringing until a specific photo is taken, to one of the many runaway alarm clocks that roll away from the user so he or she cannot reach the snooze button.

Have you found the perfect device that helps you rise on time? Tell us about it in the comments (below). 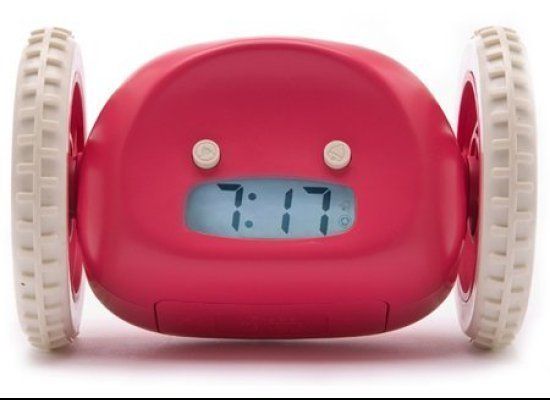 1 / 7
Clocky Alarm Clock On Wheels
It would be pretty easy to catch an alarm clock on wheels in my shoebox apartment here in Manhattan, but for those of you with larger bedrooms, the Clocky Alarm Clock is sure to get you (physically) out of bed. After you hit snooze on the Clocky for the first time, it gets a' movin,' jumping down from your nighstand and onto your floor and then rolling around on its wheels; the alarm doesn't stop until you catch it and disable it. Perhaps this will make you wake up more quickly, or perhaps it will lead you to fall asleep prostrate on the floor clutching your alarm clock. The Clocky Alarm Clock On Wheels is <a href="http://www.amazon.com/gp/product/B0013CTFQ4/ref=as_li_ss_tl?camp=217145&creative=399369&creativeASIN=B0013CTFQ4&ie=UTF8&linkCode=as2&tag=thehuffingtop-20" target="_hplink">available on Amazon for $39.99</a>.
Amazon