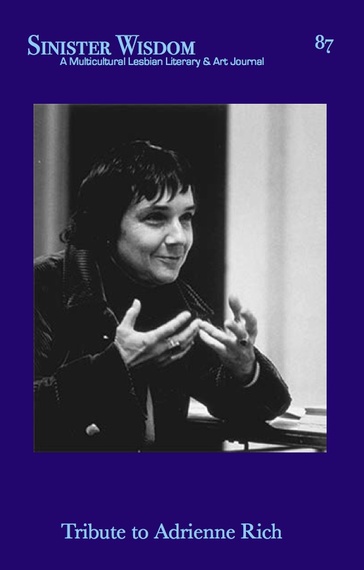 In 2009, I took on the editorship of Sinister Wisdom with some trepidation. Did I have the time and energy to steward a lesbian-feminist magazine, especially one with such an august history? Was I up to the task that so many of my literary idols -- Adrienne Rich, Michelle Cliff, Melanie Kaye/Kantrowitz, Elana Dykewomon and most recently the indefatigable Fran Day--did with aplomb? Did I have the vision necessary to make Sinister Wisdom a vibrant and relevant journal for lesbian-feminists today? Could I continue to nurture and grow the journal and its community of supporters?

I still cannot answer these and other questions authoritatively, but as we approach the second anniversary of the death of Adrienne Rich, I want to highlight Sinister Wisdom 87--a tribute issue to Adrienne Rich.

Catherine Nicholson and Harriet Desmoines started Sinister Wisdom in 1976 in Charlotte, North Carolina. Initially, they committed to publish three issues of the journal. Lesbians around the country hailed Sinister Wisdom as a vital continuation of the work of Amazon Quarterly, a journal published by Gina Covina and Laurel Galana from Oakland, California from the fall of 1972 until the summer of 1975. One year grew into two; the second year became a third. After four years of publishing Sinister Wisdom, independently and with a group of volunteers and guest editors, Desmoines and Nicholson wanted to pass editorial control to others while ensuring that the journal continued to publish and operate as a vital resource for lesbian-feminist conversations. Cliff and Rich accepted the roles of co-editors and co-publishers of Sinister Wisdom, moving the journal to their home in Montague, Massachusetts with a post office box in Amherst.

Cliff's opening salvo as co-editor of Sinister Wisdom captures the revolutionary zeal of the WLM and Sinister Wisdom's role in fomenting and nurturing the movement.
In her first "Notes for a Magazine," Rich affirmed the initial vision of Desmoines and Nicholson who "described the founding of Sinister Wisdom as a political action." Rich noted that language and images are "ultimately political...what we read affects our lives." Within the pages of Sinister Wisdom and in the broader lesbian-feminist community, Rich wanted "intensive dialogue among women across racial lines" as well as across class lines. Rich wrote that she and Cliff

want to publish material which makes explicit the experience of women who have often been erased or unheard even within lesbian communities. We want to see a continuing documentation of dialogues on race, and what must inevitably come on their heels, and already is -- a wholly new, woman-identified dialogue on class.

Dialogues about race, class and anti-Semitism were central to feminism and lesbian-feminism during the years that Cliff and Rich co-edited Sinister Wisdom.
In Sinister Wisdom, women worked out ideas within a community. In recent years, feminists, lesbian-feminists and lesbian separatists have all been skewered for being dogmatic, rigid and doctrinaire, particularly in their thinking about race, class, and a variety of political practices. Given this current cultural portrayal, it is striking to read old issues of Sinister Wisdom. They offer a stark alternative to such caricatures. Lesbians, lesbian-feminists, and lesbian separatists within the pages of Sinister Wisdom are not angry, rigid or dogmatic. They are thinking women, engaged deeply in politics, theory, and daily life. They are women who are striving for new modes of understanding and new ways of living in the world.

Thirty-eight years since it's founding, Sinister Wisdom continues to publish quarterly. We share our thirty-eighth birthday celebration with sister feminist publications, Calyx and Lesbian Connection. Volunteers, subscribers, and donors support the work of Sinister Wisdom. Sinister Wisdom 87, a tribute issue to Adrienne Rich, is available for sale on our website, www.SinisterWisdom.org. I invite you to support and celebrate the many legacies of Sinister Wisdom!

This blog post is adapted from a longer essay in Sinister Wisdom 87 about the Cliff/Rich editorship.