This is the first in a four-part series about restoring the soils, forests, wetlands and grasslands that take carbon out of the atmosphere.

As Earth Day approaches this year, it's a good time to begin paying attention to parts of the Earth many people don't think about. They are the natural ecosystems that provide us with countless and often priceless benefits that make our lives better, and they usually do it for free.

Some of them have the ability to slow down global climate change, a benefit that has not been given sufficient attention during the more than 20 years of international climate negotiations. Now government agencies, private organizations, foundations and scientists are paying more attention.

These ecosystems are known as "carbon sinks". They take carbon out of the air and store it away. It turns out that cutting carbon dioxide (CO2) emissions from power plants and other human sources will not be enough to keep climate change at tolerable levels. We also need natural sinks -- soils, wetlands, grasslands and forests - to perform what the experts call terrestrial biological carbon sequestration. A brief review of the science will help explain.

Fact No. 1 is that carbon is all around and within us. It is the fourth most common element in the universe. As NASA explains, "Carbon is the backbone of life on Earth. We are made of carbon, we eat carbon and our civilizations - our economies, our homes, our means of transport - are built on carbon." In other words, carbon is good.

Fact No. 2 is that some of the carbon is in motion. Most of it is locked away in rocks and underground in deposits of coal, oil and natural gas. The rest moves through the Earth's "four spheres": the geosphere, hydrosphere, atmosphere and biosphere, also known as soils, water, air and living things. Carbon's circulation through these spheres is called the carbon cycle. 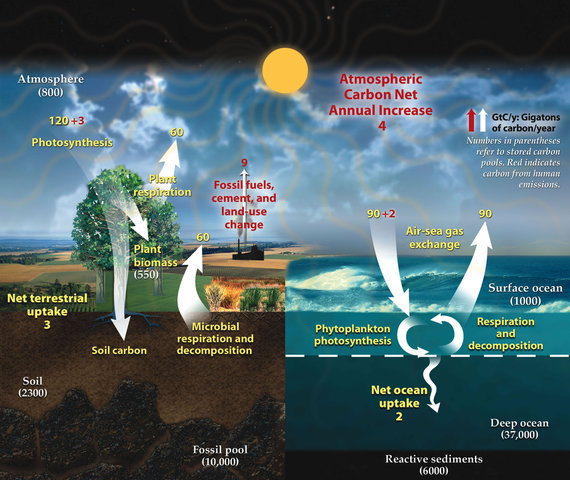 Fact No. 3: As carbon moves through the cycle, certain healthy natural ecosystems soak it up and hold it for a time. Ocean's are the biggest sink. They currently soak up 48% of the carbon dioxide (CO2) emissions from our combustion of fossil fuels. Recent research has found, however, that the carbon-storing ability of oceans is declining, in part because they are warming and cold water is better at holding CO2. That makes our land-based sinks - those forests, soils, wetlands and grasslands -- even more important.

Fact No. 5: The most fundamental objective to keep climate change at adaptable levels is to restore the Earth's carbon balance. It's more complicated than burning less coal and planting more trees. The terrestrial sinks are always in flux. They absorb carbon at times and release it at other times. For example, plants absorb carbon when they grow and release it when they die. Healthy soils store carbon when they are undisturbed, but release it when they are plowed. Forests release carbon when trees burn or die. Fluctuations also are driven by the seasons. The biosphere stores more carbon in spring and summer when there is a lot of vegetation, but stores much less in the fall and winter when vegetation dies or goes dormant.

These natural sinks can make an important contribution to the carbon balance if they are healthy, preserved and well managed. That has not been the case during the industrial era. Human activity has degraded or destroyed much of them. Our challenge is to put them back into service with reforestation, wetland restoration, farming practices that minimize soil disturbance and grazing practices that allow grasslands to recover.

To sum up, there are two critical paths to avoiding the worst impacts of climate change: We must switch to clean energy and we must remove excessive levels of carbon from the atmosphere.

Research is underway on technological methods to capture and store carbon. These engineered solutions may or may not prove affordable, scalable or socially acceptable. In the meantime, fixing our natural carbon sinks should be the next big thing for combatting global warming.

Finally, Fact No. 6 is about the multiple co-benefits I mentioned at the top of this post. Healthy soils hold more moisture and are more productive. Moving animals from pasture to pasture before they can over-graze allows grasslands to host the pollinators critical to 75% of the word's food crops. Wetlands retard flooding, recharge groundwater and provide another type of wildlife habitat. Coastal marshes reduce damages from storm surges. Urban forests and green spaces reduce flooding, provide an inexpensive way to control storm water and reduce the urban heat island effect that causes illnesses and deaths. Rural forests hold raindrops and soils in place, preventing erosion that would otherwise pollute rivers and streams.

These ecosystem services do not favor Democrats over Republicans, or Republicans over Democrats. They benefit conservatives, moderates and progressive alike. They don't discriminate against people who are skeptical about climate change. Everybody wins. That's why restoring America's natural carbon sinks should be one goal on which people across the political spectrum can find common ground.

Next: How much natural carbon sinks can contribute to U.S. climate goals, and why we don't have to worry that carbon sequestration will be a license to pollute.