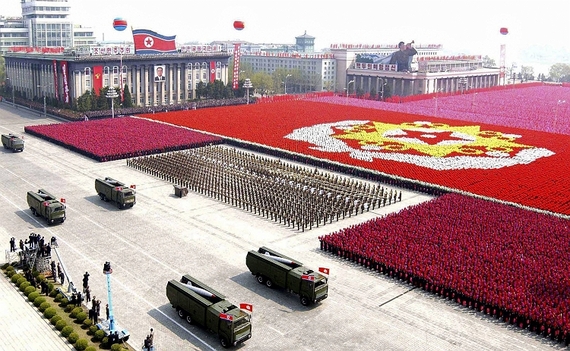 China and the United States share the same short-term interests on the Korean Peninsula, perhaps best summarized in Beijing's long-standing policy vis-à-vis North Korea of "no war, no instability, no nukes." (不战、不乱、无核) Neither side is interested in a military solution to ongoing tensions between North and South Korea. Neither party, despite US rhetoric to the contrary, wants to topple the Kim Jong-un regime and see the North descend into chaos amid a succession or unification crisis. And neither Beijing nor Washington desire a nuclear-armed North Korea further fueling tensions in an already volatile region of Asia.

China and the United States continue to disagree on the right tactical approach to achieving these three objectives--the former preferring quiet diplomacy and continuous engagement with Pyongyang, the latter favoring publicly pressuring the regime with sanctions to change its behavior-- and both countries also pursue markedly different long-term strategic goals on the Korean Peninsula. However, the Obama administration's policy of "strategic patience" (putting pressure on the regime while calling for North Korea to return to the Six-Party Talks) is a de facto acceptance of the unlikelihood of the reunification of North and South Korea in the near future. As a consequence, there will be no way around Kim Jong-un in the years ahead, and Beijing and Washington will have to find a way to deal with the regime, no matter how distasteful.

Apart from this apparent confluence of Chinese and US interests, there are three reasons why both countries need to cooperate more tightly than ever on managing the ongoing crisis on the Korean Peninsula. First, given the Republic of Korea (ROK) government's uncompromising stance with respect to North Korean provocations, there will be an increased chance of more severe inter-Korean crises occurring over the next two years. (There will be little chance of a Korean-led détente initiative until the end of the presidency of Park Geun-hye in 2018, given the government's current policies.) Second, notwithstanding repeated calls for putting a "military option" back on the table, a large-scale joint US-ROK military operation against North Korea is increasingly becoming less realistic. Third, ongoing tensions on the Korean Peninsula have the potential to undermine trust and increase military competition between China and the United States, a development that is set to detrimentally affect overall Sino-US relations and cannot be in the interest of either party.

Seoul, under the government of Park Geun-hye and after repeated provocations from the North, has abandoned engagement and stepped up its bellicose rhetoric and uncompromising stance against North Korea. Over the last decades, both sides have mastered the game of bringing tensions to the precipice and then pulling back. However, as tensions rise, there is less and less flexibility in this perennial brinkmanship with both sides in danger of losing control during a future confrontation as martial propaganda and provocations will reach unprecedented heights. In addition, there is little understanding how much control Kim Jong-un genuinely exercises over the military and the party and whether they would stand down in the face of South Korean provocations when given the order by the supreme leader.

Certain South Korean policies have also helped to further fuel tensions. For example, ever since 2010, South Korea has implemented a "disproportional response" theory of deterrence. As John Delury, a professor at Yonsei University, explained in an interview with The Diplomat: "Seoul has proclaimed that for every one shot fired by the North, the South will hit back with 3 to 5 times greater force. That principle for deterring the North along the contested maritime border seems to apply to the DMZ [Demilitarized Zone] as well." This concept of deterrence increases the chance of an escalating spiral of attacks and counter-attacks that could eventually lead to full-scale war.

A military confrontation on the Korean Peninsula has the potential to once more draw in both the United States and China. Beijing is committed to the defense of the North under the 1961 Sino-North Korean Treaty of Friendship, Cooperation and Mutual Assistance, whereas the United States and South Korea have kept a mutual defense treaty since 1953. However, China has repeatedly said that in a conflict provoked by the North, it would not uphold its treaty obligations. (Indeed, according to a US scholar, China has tried to have the clause requiring it to defend North Korea revoked.)

Any type of large-scale military operation on the Korean Peninsula will almost certainly involve large-scale destruction of human life and property. As the commander of US forces in South Korea, General Curtis Scaparrotti recently testified: "Given the size of the forces and the weaponry involved, this would be more akin to the Korean War and World War II-very complex, probably high casualty." North Korean artillery could shell Seoul with thousands of rounds within the first hour of a full-scale war.

Yet, certain weapon systems could make a confrontation even worse than the Korean War. Next to an arsenal of approximately 700 (potentially nuclear-armed) Soviet-designed short-range ballistic missiles (and an unknown number of intermediate-range and long-range missiles), North Korea also has one of the world's largest chemical weapons stockpiles including mustard, phosgene, and sarin gas. According to a RAND study cited by the Congressional Research Service, "One ton of the chemical weapon sarin could cause tens of thousands of fatalities." Pyongyang has also made substantial investments in special operations forces, cyber weapons, and unmanned aerial vehicles to offset the South's conventional military advantage.

Even short of full-scale war, the tensions on the Korean Peninsula have the potential to derail the Sino-US relationship. For example, China vehemently is opposing the deployment of Terminal High Altitude Area Defense (THAAD) to South Korea. Yet, Pyongyang's nuclear and missile tests over the last couple of weeks, finally convinced Seoul to move forward with plans to station the US missile defense system in the South.

China sees the deployment of THAAD as an outright provocation not only designed to thwart North Korea's missiles but also its own military power. "We are firmly opposed to the deployment of the THAAD system on the Korean Peninsula and urge relevant parties to act cautiously. No harm shall be done to China's strategic security interests," China's Foreign Ministry spokesperson said in March 2016.

While Washington and Seoul could have used the potential deployment of THAAD merely as a threat to obtain China's cooperation on imposing tougher UN sanctions on North Korea (something US diplomats have denied), the diplomatic consequences of stationing THAAD in South Korea could hobble the Sino-US strategic relationship and cause China to retaliate in other areas, for example in the South China Sea or in cyberspace, where it feels threatened by US military power. This could further fuel the ongoing US-China arms race in the Asia-Pacific region.

Consequently, given ongoing inter-Korean political dynamics, the disastrous consequences of full-scale war on the Korean Peninsula, and the potential of ongoing inter-Korean crises to disrupt and damage the China-US relationship, it is of vital interest to both Beijing and Washington to craft a more constructive approach towards North Korea, centered around dialogue and persistent diplomatic initiatives and despite a new set of UN sanctions. As John Delury noted in an email exchange with The Diplomat: "Sanctions work best when implemented and more important lifted in the context of negotiation, and a robust diplomatic process backed by political will on both [all] sides." This does not necessarily mean the resumption of Six-Party Talks, but rather quiet backdoor channel diplomacy laying the groundwork for future negotiations.

A diplomatic deal with the United States and South Korea might be useful for Kim Jong-un at this juncture given that it would cement his legitimacy in the upcoming Seventh Korean Workers Party Congress in May 2016. "We should stop fighting the idea of his [Kim Jong-un's] existence, and instead use our leverage inherent in helping him deepen his legitimacy to get things we want," according to Delury. One sign that the United States would be open to such a dialogue, presumably spearheaded by China, is that US Secretary of State John Kerry on February 23rd did not outright dismiss the suggestion of Chinese Foreign Minister Wang Yi "to pursue in parallel tracks the denuclearization of the Korean Peninsula and the replacement of the Korean armistice with a peace agreement." For the time being and no matter how unpleasant, Beijing and Washington have a vested interest in stable relations with Pyongyang and the timing might just be right for a concerted Sino-US diplomatic effort. Indeed, it is a political necessity.

This essay appeared in the March 18 edition of the ICAS Bulletin, a bimonthly survey of American scholarship on U.S.-China relations.