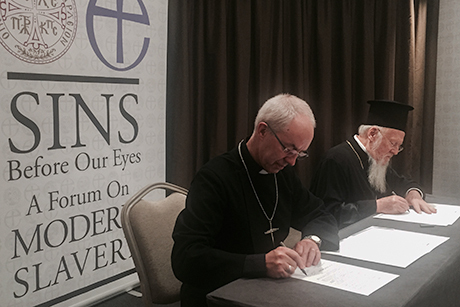 "There are more people in slavery today than at any time in human history." Thus reads a declaration signed in Istanbul on February 7 by two of the world's foremost religious leaders: Bartholomew, Archbishop of New-Rome and Patriarch of Constantinople, and Justin, Archbishop of Canterbury. They committed themselves, within the communities of both the Orthodox and Anglican churches and beyond, to educate, raise awareness, and take action to work and pray to end this "scourge against humanity". They established a joint task force to make concrete recommendations because action was a central theme of the day.

At the invitation of the Patriarch, this Forum was born in discussions at Lambeth Palace in London late 2015 when the two leaders met. They agreed to focus on the specific challenges of modern slavery and to explore how the gifts and energies of their religious communities might do more to bring action on a horrendous and too often hidden problem. A group of about 60 people included clergy from the two communities, academics, and some practitioners; many are directly engaged on the issues. The day concluded with the formal signing of the joint declaration.

The tone for the meeting was set in the Patriarch's opening statement: "The Orthodox Church is often accused of neglecting the world for the sake of liturgical worship and spiritual life, turning primarily towards the Kingdom of God to come, disregarding challenges of the present. In fact, however, whatever the Church says, whatever the Church does, is done in the name of God and for the sake of human dignity and the eternal destiny of the human being."

And the Archbishop of Canterbury made clear what was meant by the forum's title: "Sin before our eyes". "Slavery is all around us, but we are too blind to see it. It is in our hands, yet we are too insensitive to touch it. The enslaved are next to us in the street, but we are too ignorant to walk alongside them. It must not be relegated to a footnote in history. It is a living reality in all our communities."

The day was full of poignant stories that shone light on the realities of slavery today: its cruelty, impact on the most vulnerable, and the power of action to address it. With a special focus on Turkey and neighboring Greece, the links between refugee and migrant situations and exploitation were a highlight. The UK Modern Slavery Act and resulting action was another theme, linking prevention, law enforcement, and care for the vulnerable to the responsibility of churches and communities to be more alert and aware and to act. The discussions began an exploration of root causes, seen both in what Pope Francis describes as "the globalization of indifference" and in contemporary economic systems including the demand for cheap goods. Sexual exploitation was a central focus. "The same arrogance and greed are responsible for the oppression and exploitation of innocent victims - most often children and women - of human trafficking, human smuggling, prostitution, the sale of human organs, indentured labor, and many other dimensions of modern slavery."

The Archbishop of Canterbury was insistent on his commitment to action and he cited many routes: following the supply chains for goods we consume to be sure that at the end there are no workers in bondage, paying attention to domestic servants, supporting refugees in communities, among many others. Both leaders highlighted the urgent need for churches to work together with other partners, because "it is impossible for the Church to close its eyes to evil, to be indifferent to the cry of the needy, the oppressed and exploited."