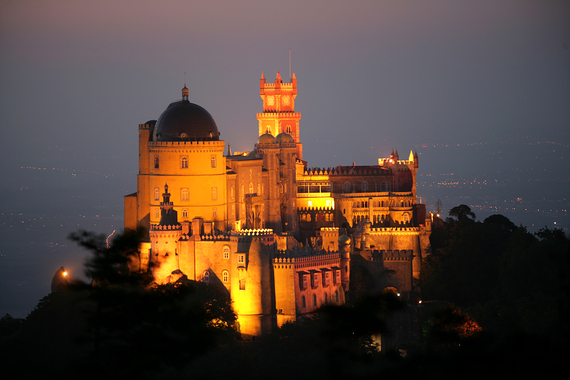 I came to the furthest most Western region of Europe to be dazzled by Moorish castles, 17th-century mansions, vast open spaces for hiking and exploration, dreamy gardens, and to see why so many of my writing traveler colleagues were sold on Sintra, each giving it a thumbs up, and a must visit while in Portugal's capital of Lisbon. Even my native Portuguese friends suggested that no trip to Portugal would be complete without a visit to stunning Sintra.

Who among us has not dreamed of exploring historical sites from a bygone world in a fairy tale setting? Who wants to experience where heroic exploits transpired? How many times has fantasy led us to imagine that life has us fated for epic destinies? When do legends awaken our senses, and our imaginations? 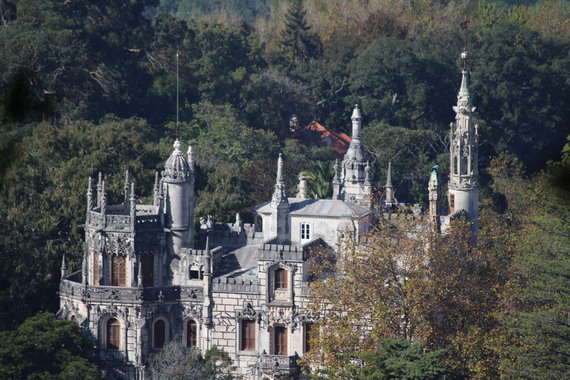 I came to see the magic land for myself. Impressive palaces, majestic castles, iconic churches, medieval fortresses, renaissance art, dotted with breathtaking soft-hued country estates are what brought me to the region 30 minutes northwest of Lisbon, scintillating Sintra.

With its imposing mountain range, miles of lush, green mountains and trails, filled with parks and palaces in a surreal fairy tale setting, rolling down to the deep azure Atlantic, it's difficult to not get captured by its vast beauty 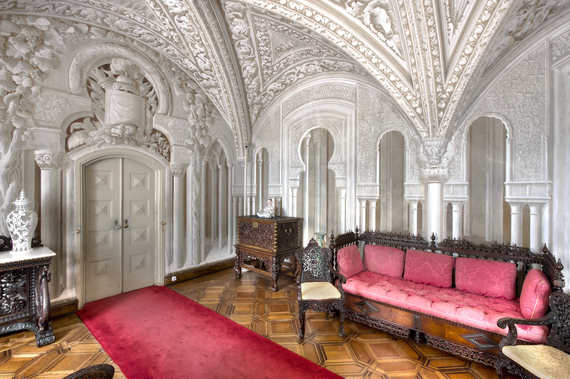 Among SIntra's many luminaries, Lord Byron glamorized Sinta. "Lo! Cintra's glorious Eden intervenes, in variegated maze of mount and glen," as inspired in his epic poem "Childe Harold's Pilgrimage". The Danish writer Hans Christian Andersen was a resident of Sintra, inspired by its 19th century, ornate and colorful architecture and Moorish castle.

Sintra has penetrated the travelers radar in recent years, especially popular during the hustle and bustle of the summer tourist season. I prefer to avoid the crowds and visit Europe in the non-summer months. No matter when you visit, attempt to arrive at the sites early to beat the hordes of fellow travelers who have discovered this charming hamlet. One can easily spend several days soaking in all
that Sintra has to offer.

In 1995, Sintra was bestowed the highest honor when UNESCO awarded the nearly 960 hectares, as a world heritage site. The first destination in Europe classified by UNESCO as a landscape, comprising Sintra and surrounding Cascais Natural Park 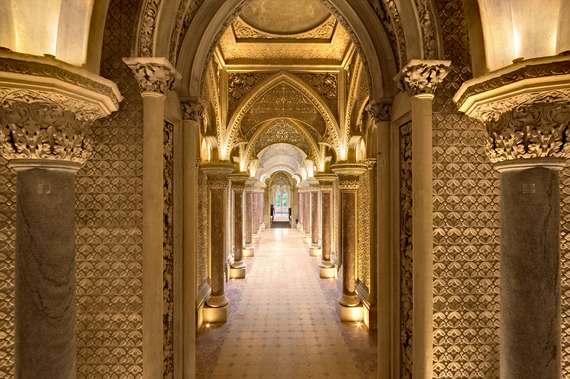 Must Sites To See:

A half a mile from the historic center of Sintra lies the Moorish-inspired Palace of Monserrate. The former home of a Victorian era English textile millionaire, first viscount of Monserrate, Francis Cook, who was the owner of one of the greatest private art collections in England. Cook conceived the present romantic palace and gardens as a family summer residence.

A unique testimony of the eclecticism of the 19th century, the Palace of Monserrate and world heritage site is one of the most distinctive landmarks in all of Portugal. The Palace blends Venetian Gothic style with influences from India and Moorish architecture with a fusion of varying shapes, styles and materials blending together to form a unique palatial home.

The property boasts perhaps Portugal's greatest botanical gardens. The exotic, surrounding, rambling, sprawled out Zen-like gardens extend for miles, and include species from throughout the world. The owners went to great lengths to include curious and alluring flora from Chinese weeping cypress, Mexican palms, yuccas, even agaves, Japanese camellias, and Himalayan rhododendrons, all organized by their geographical origins.

One can spend hours strolling the grounds and never tire of the mismatch of contrasting architectural styles, massive grounds, and diverse flora. 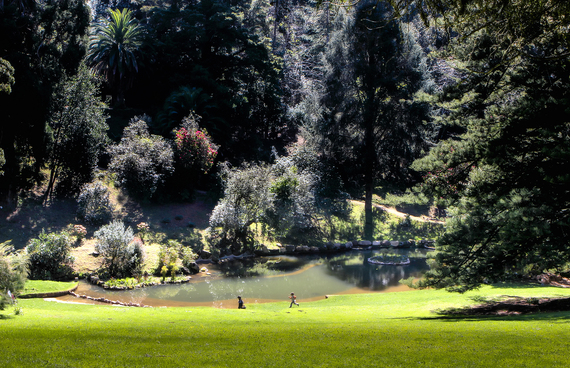 The Grounds of Monserrate

One of the most enigmatic monuments in all of fairytale-like Sintra. Emerging from a lush green forest lies a fascinating palatial house and chapel that will leave you spellbound. The elegant summer retreat of the Carvalho Monteiro family is known as Quinta da Regaleira. From 1898 to 1912 Carvalho Monteiro dedicated his life to the transformation of his favorite palace to its present day state. Although designed in the early 20th century by Italian opera designer, Luigi Manini, the Quinta da Regaleira blends Neo-Gothic, Neo-Manueline and Italian Neo-Renaissance styles. The exuberant scheme was imagined and created by some of Portugal's best artists: Antonio Goncalves, Joao Machado, Jose da Fonseca, Costa Motta and Rodrigo de Castro, as sculptors in stone and Julio da Fonseca, designer in wood.

For such a grand structure with an eclectic design, the ornate villa has a home-like feel with incredibly carved fireplaces, panoramic terraces, a Renaissance Hall, and a turret perched high above the structure with panoramic views over the lush, green Sintra Hills and the Atlantic Ocean. The combination of extravagant Maueline Renaissance and Baroque styles is haunting. 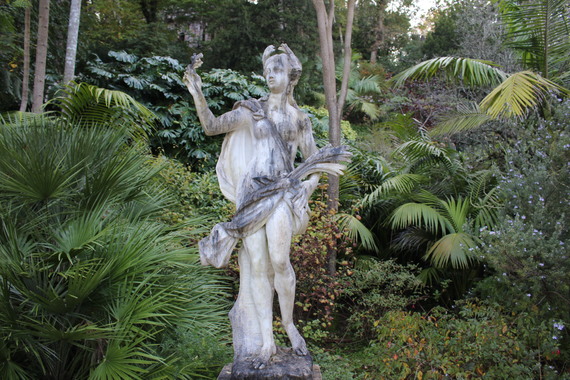 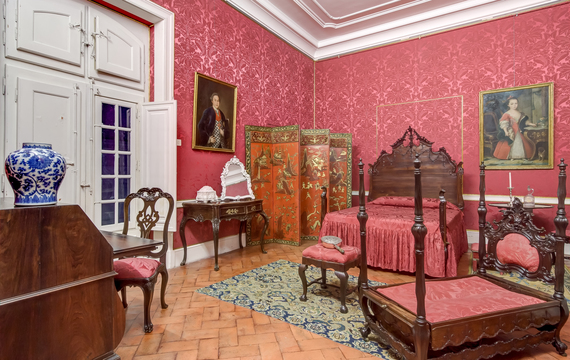 The enchanting garden is a magical and mystical image in mythology, revealed in a succession of magical and mysterious places. Stoll the pathway known as the "Promenade of the Gods". Complete with statues of classical Greek Gods: Fortune, Orpheus, Venus, Flora, Ceres, Pan, Dionysus, Volcan, and Hermes, the grounds consist of a lake, waterfall, chapel, bridges, fountains, wells, greenhouse, a tennis court and even an aquarium. 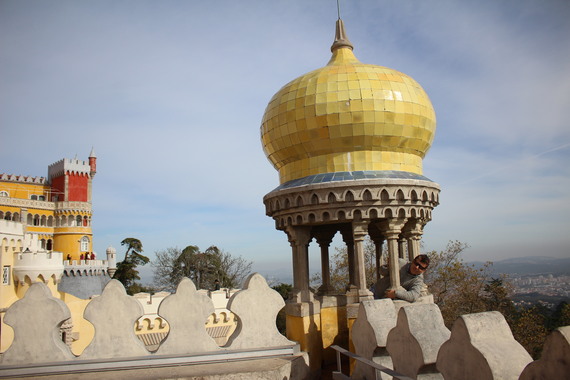 Park and National Palace of Pena

It's hard to believe that this once barren hill would be transformed into the cultural center of Sintra. Some call the Palace of Pena the crown jewel of Sintra. The Palace is a castle set high on a hill overlooking Sintra and the nearby Atlantic Ocean, located in a natural environment constituting the most pivotal part of Sintra's cultural landscape. The park and palace are stunning, and represent the finest examples of nineteenth century Portuguese Romanticism. The Parque da Pena, surrounding the palace with over 500 acres, is filled with gardens, ponds, bridges, caves, greenhouses and other small houses that contain the most important piece of Sintra's cultural heritage and World Heritage site.

The palace's history started in the Middle Ages when a chapel dedicated to Our Lady of Pena was built on the top of the hill above Sintra. According to tradition, the construction occurred after an apparition of the Virgin Mary appeared. The original building, once occupied by the Jerónimos monks, dates from 1503. In the 18th century, the monastery was severely damaged by lightning. However, it was the Great Lisbon Earthquake of 1755, occurring shortly afterward, that took the heaviest toll on the monastery, reducing it to ruins. Palácio da Pena originated in 1839 when the king consort Fernando II acquired the "Our Lady of Pena Monastery" ruins to adapt it to a palace. The Pena palace is one of the best examples of 19th-century Romantic revivalism in Portugal. 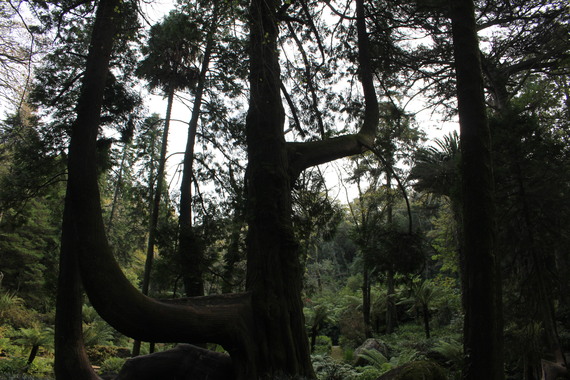 The Grounds of Pena Park

Get lost and prepare to be dazzled. The grounds seemingly continue forever. Discover the valley of the lakes, where five lakes flow into the Grotto of the Monk, a place of solitary meditation of the Hieronymite monks. The Countess's Fernery holds the first ferns in the Parque de Pena begun by Don Fernando II. Even a Manueline Chapel graces the noble grounds.

One can easily spend a full day meandering through the palace and its well-manicured grounds. You may continue on your stroll to the to the quaint Sintra town village from the fabled property. 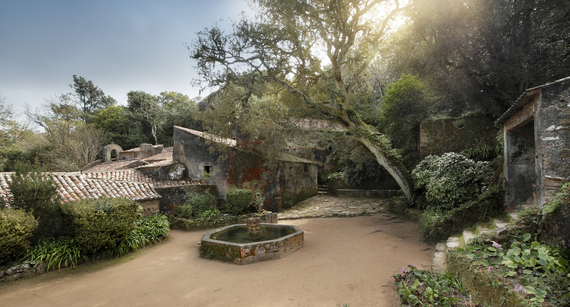 Covent of the Capuchos

Abandoned in 1834, the convent of the Holy Cross in the Sintra Hills, also known as the "Capuchos" or "Cork Convent", was built in 1560. Chosen by the friars as a place of retreat and remarkable for its extreme simplicity, it embodies the ideal of universal brotherhood lived by the Franciscan friars who lived there. The cork from the many oaks on the grounds was used as insulation in the sacred convent. 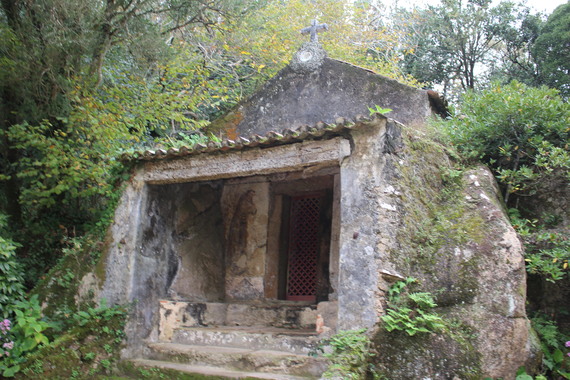 The Chapel at Capuchos Convent

The Cork Convent is fully integrated into the surrounding forest, built to fulfill the teachings of contemplation of Saint Francis of Assisi. Built with respect for harmony and divine construction, it is based on nature. The eerie surrounding woods have survived the gradual deforestation of the Sintra Hills, and were cared for and maintained for centuries by the friars who lived in the convent. An immense tangle of ferns, mosses, epiphytes, and climbing plants, 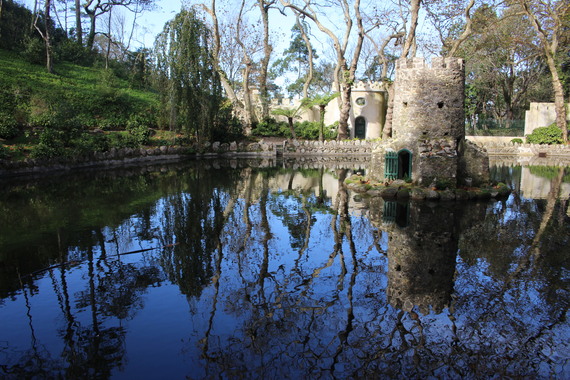 Reflections in a Pond on the Grounds of the Pena Palace 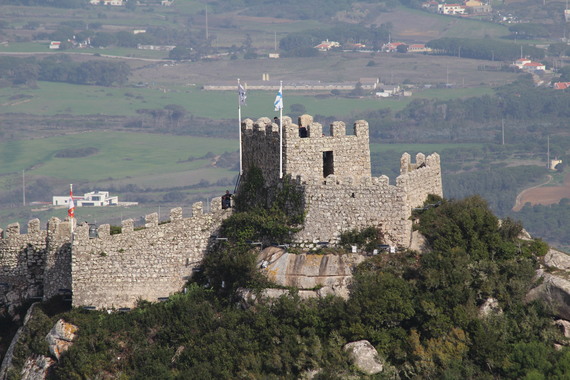 This was once the site of a military fortification and is a testament to the Islamic presence in the region. Although the exact dates of construction are not known. The Moorish Castle was probably build sometime between the 8th and 9th centuries. Overlooking Sintra, it acted as a watchtower to protect Lisbon and the surrounding area.

Get Active In Sintra 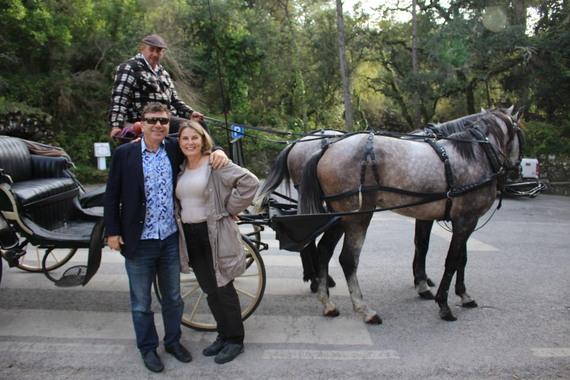 On a Carriage Ride To Monserrate Palace 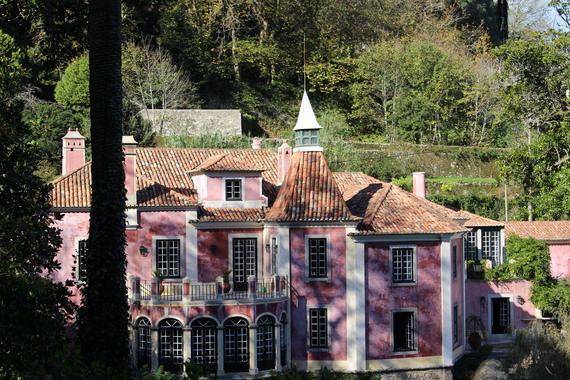 Embedded in the lush and mystical forest of the Sintra Mountain just at the foothill of the Moorish Castle, part of the Natural Park of Sintra-Cascais as well as a UNESCO World Heritage landscape, Quinta de Santa Maria is a green oasis in the center of the historical town of Sintra, Portugal. Walking in the footsteps of famous Danish writer H C Andersen or British writer Lord Byron is all in a day as a Sintra resident, or as they are called in Portuguese, sintrenses.

The home-like Bed & Breakfast offers five suites with garden views with both a pool and two fish ponds. 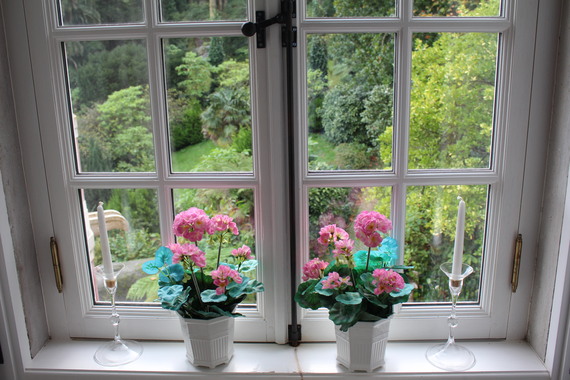 The Borglund family from Sweden run the exquisite B & B and grounds, creating a quaint modern stay in old-world Sintra. The property was a private residence and holiday home reconstructed from 2006-2010. The structure dates back to 1884. The property might have been a chapel dating back to the 14th century. There is a nearby convent that the property might have been connected to. The reconstructed castle-like home was redone to perfection with attention to every detail in place. The restored salon main seating room is the oldest room in the house. The restored home still keeps its charm redone in the finest Portuguese materials.

Sintra being a land for all season, Christopher Berglund loves the early spring in February and March, when the Camelias - Flower show called the Camelia exhibition draws people to Sintra from over Europe. 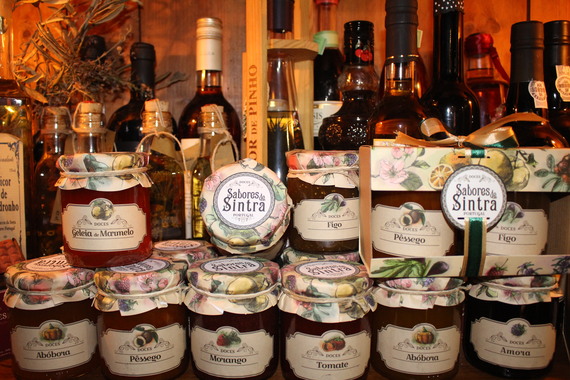 Sintra, with its mild climate, is a destination for all seasons.

No matter what your pleasure is, Sintra will draw you into its tangled web of vast images from the past. The assortment of awe-inspiring, castle-like structures, churches and more give a glimpse into medieval, renaissance, and baroque worlds. All are surrounded by green mountains and a Robin Hood-like Sherwood Forest filled with parks and open spaces which will mesmerize you.