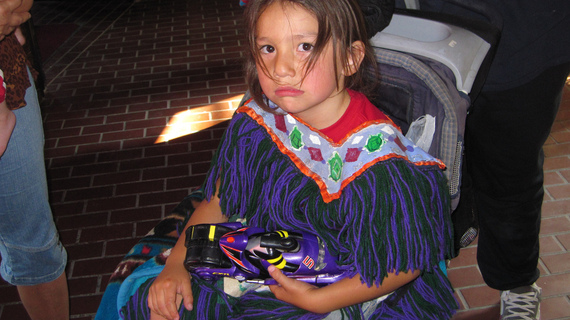 Sightings of religion-related stories among members of Sioux tribes in South Dakota, one would think, could be beyond the scope of the national media, yet two independent stories win space this week on the front pages of, e.g., the New York Times.

But there is noise now. "We're so frustrated to the point of breaking," said a Rosebud Sioux tribal council member. Expect lawsuits, but in Spotted Eagle's opinion: "I think it's going to be a spiritual victory." Economics is involved, so coverage will be headlined.

The other story is more explicitly related to religious concerns, but was getting less attention until NYT reporter Julie Bosman took up the cause. The word "frantic" enters the story headlined "Pine Ridge Indian Reservation Struggles With Suicides Among Its Young."

Most of us who live far from the reservation can turn the page and move on. But, given the history of the U.S. Government and the citizen record, one seeks "a spiritual victory" without much hope.

Since December, nine people (ages 12 to 24) have committed suicide on the Pine Ridge Reservation, and the federal Indian Health Service reports that between December and March there were 103 known suicide attempts. Yes, the words "frantic" and "dire" are fitting. (In 2013 only five people committed suicide, so this is an upsurge in tragedies.)

John Yellow Bird Steele, president of the Oglala Sioux tribe, declaring an emergency, is stumped about the "why." "It is devastating...When you have a good understanding of what's happening, come back and tell me."

Many elements are obvious subjects of speculation. Cyber-bullying, think some. Bad living conditions. Sexual abuse. Teenager-fad contagion. Stephanie Schweitzer Dixon, the executive director of a suicide prevention group, said: "I know that things seem to be getting worse for kids."

Ted Hamilton, the superintendent of the Red Cloud Indian School, a Jesuit school, observes: "To be Lakota (Sioux) in this world is a challenge because they want to maintain their own culture, but they're being told their culture is not successful."

They live with "the legacy of oppression and forced removals, the lack of jobs,...the high levels of drug and alcohol use around them...The federal government dropped the ball in terms of mental health resources," and "the system is overwhelmed" on all reservations. It will get worse.

Some patient and creative souls are on the scene, working against all odds. Pastor John Two Bulls works with youths at Pine Ridge. Helping head off a planned group suicide, he listened to the young people: "They were tired of the lives they had at home, no food, with parents all intoxicated, and some were being abused, mentally or sexually."

Toss in a weird element: Like two Milwaukee girls who, last year, following storytelling websites, attempted to murder a classmate to please "Slender Man," a weird, ominous, fictional figure, some of these Sioux call him "Tall Man Spirit." He recalls the "suicide spirit" in which many Native Americans believe.

Personal note: Nebraska-born, I grew up with white-kids' lore about the Sioux, and have had special interests. (There's even a Marty Mission among them, inspired by namesake missionary, Bishop Martin Marty, O.S.B.). On a visit to Rosebud Indian Reservation we met a Catholic laywoman who had served there for eighteen years. She chronicled what we would have called "hopeless" conditions.