Shanghai's Zhizhen Internet Technology Co. Ltd. appeared before a Shanghai court on Wednesday to argue that Apple's Siri infringes on patents Zhizhen uses in its own voice-controlled assistant, Xiao i Robot. The virtual assistant can be found on smartphones, TVs, cars, in web browsers and powering call centers, among other applications. According to the company, Xiao i Robot is used by over 100 million people in China.

A Zhizhen spokeswoman told Shanghai Daily that Siri illegally used the "word chat robot system" the Chinese company patented in 2006 -- two years after first applying for the patent, and five years before Apple debuted Siri in 2011. An earlier China Daily story about the lawsuit described the Zhizhen patent in question as covering "a type of instant messaging chat robot system." Before Apple launched the assistant on the iPhone 4S, Siri existed as a standalone app, also called Siri, that a California-based startup began developing in 2007.

"We think Siri infringes our patent right in the word chat. We want them to stop it as everyone can see iPhones and iPads are widely sold in China," the spokeswoman told Shanghai Daily.

Zhizhen first brought its suit against Apple in June 2012, when Siri made her debut in China, and the case is slated to be heard in court this coming summer.

A Zhizhen lawyer told the AFP that the company "will ask Apple to stop manufacturing and selling products using its patent rights, once Apple's infringement is confirmed," and may eventually sue for compensation.

So just how similar are the two assistants?

Screenshots of the Xiao i Robot iPhone app on iTunes suggest the assistant doesn't bear too much of a resemblance to Apple's. However, videos showing Zhizhen's assistant on an Android phone and running the app on a Lenovo handset suggest a Siri twin.

It's unclear which app came first, or if the two were in fact developed simultaneously. Given Apple's emphasis on design and aggressive trademark maneuvering, it seems a bit of a stretch to argue they directly copied an existing app for a flagship product. And, a video uploaded five months ago that purports to show Xiao i Robot on an HTC phone pictures an interface that looks nothing like Siri's.

However, certain features of Apple and Zhizhen's assistants do share certain qualities, according to online videos:

They look alike: Xiao i Robot is personified by a yellow, bobble-headed cartoon figure -- where Apple has eschewed any sort of avatar for Siri. Yet videos shared online picturing the Xiao i Robot in action show an app that looks nearly indistinguishable from Apple's own once a user begins speaking with it. Like Siri, Xiao i Robot appears as a small microphone in a silver circle that flashes to indicate it's thinking about an answer. And when asked for restaurant suggestions or information about the weather report, it will offer pictures or graphics along with a spoken answer. 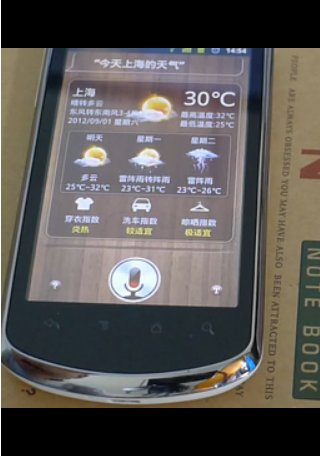 Xiao i Robot in action.

They sound the same: Both assistants answer in a female voice, and both chime twice to show they're listening. They also reply via identical speech bubbles.

They can complete similar tasks: According to the description of the Xiao i Robot iPhone app, Zhizhen's assistant finds restaurants, places calls, checks the weather, offers flight updates and train schedules, gives directions and looks up all manner of facts -- from the latest stock quotes and exchange rates to biographical information for people like Lee Kai-Fu.

They both have some attitude: Siri may have met her sassy Chinese cousin: As this Baidu video (in Chinese) goes to show, Xiao i Robot can carry on a human-like conversation just like Siri (say "You're really smart!" and she'll send back a smiley face) and is able to answer personal questions such as, "Who's your mother?" or "When's your birthday?"

The two could be long-lost virtual twins. So do Xiao i Robot's icons, earcons and speech-bubbles predate Apple's? Or is the company that's accused Apple of stealing actually doing some pilfering of its own?