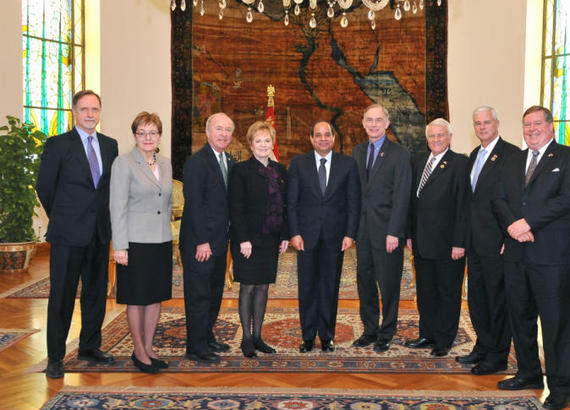 On March 7, 2015 Egypt's president Abdel Fattah al-Sisi met a Republican delegation of the US House of Representatives at the Itihadia presidential palace. The delegation encompassed chairs of the subcommittees for Foreign Affairs, Defense, and the Interior relating to the House Committee on Appropriations. This senior Republican mission -included the newly appointed US ambassador to Egypt Stephen Beecroft- emphasized Egypt's pioneering role in combating terrorism in Middle East and North Africa (MENA), following their meeting with Egyptian Defense and Foreign Minsters according to Al-Ahram. Moreover, the US officials promised to continue supporting Egypt in their respective committee at the Congress. Sisi, for his part, conveyed his gratitude for the US compassionate stances and requested more investment in the country's recovering economy.

Behind these diplomatic statements, I think there is a change in the nature of US-Egyptian relations following the post-2013 stagnation. The divide of visions among US institutions towards Egypt is obvious. Pentagon, Central Intelligence Agency (CIA), and the Republicans on one side are more supportive for the current regime's struggle to bring up stability versus the White House, State Department and the Democrats who are still reluctant to deal with post-2013 landscape. Now, I think the new development is that Egypt started to take sides. On March 9, two days after the delegation visit, president Sisi leaked to the Egyptian public a personal question posed by the congressmen to him, whether he fears president Sadat's fate -who was assassinated by Islamist extremists on October 6, 1981- or not? The question, for me, represents both a warning and praise for Sisi at the same time. I think the fact of raising such question implies:
- A Republican understanding of the violent nature of Islamists groups including the Muslim Brotherhood (MB) and the consequences of combating their ideology, in contrast to the moderation argument of the Democrats at the White House.
- An Egyptian-Republican rapprochement after the swinging stances from the White House and State Department in the post-2013 new reality. This was manifested by Sisi's choice to hold an interview with Bret Baier from the conservative Fox News media outlet on March 9 (https://youtu.be/QwU_gHbTfe8). Moreover, the Republican support is further portrayed through the Congress new conditions granting the secretary of state flexibility to assign aid to Egypt, as this year's 1.4$ billion aid allocated to Egypt is dependent on holding free and fair parliamentary elections, implementing democratic of governance and protect the rights of individuals subject to state department's reporting.

One step back to understand the convoluted American stances towards Egypt, since the very first days of the 25th January uprising, the National Security Council Staff at the White House considered the MB -holding the moderation argument on including Islamists back in their mind- as the legitimate heir of the Egyptian state according to Saad Eddin Ibrahim. I think this rush towards an American-MB rapprochement was misplaced based on a convoluted assessment of the Egyptian political landscape, functional forces and the nature of the long-lasting Egyptian bureaucracy. I owe such miscalculation to the personnel who provide biased information on the MB overestimated capabilities from foreign policy, think tank and academia circles in Washington D.C.

On the other hand, I believe that the rise of Islamic State (IS) in the Levant and North and Africa, provides a real basis for Egyptian-Republican rapprochement, as Egypt practically and historically speaking can solely provide stability to MENA and subsequently the world. It seems clearly to me, an Egyptian willingness to work closely with any forthcoming Republican team at the White House after the 2016 elections, as the democrats provides no sign so far to abandon their Islamist-MB ally. Nevertheless, the crucial Egyptian role in working with its international partners in combating terrorism is not subordinately for free. I hereby recommend what I think any American decision-maker should bear in mind to win over the Egyptian consent and friendship to protect the world from the transnational threats of terrorism:

- Unconditional assistance and support for the Egyptian military endeavors in handling terrorist groups in MENA.

- Broadening and deepening the definition of terrorism to include the cradle of these ideas, i.e the Muslim Brotherhood group which is listed illegal in several states such as Russia, United Arab Emirates and Egypt.

- Extending the geographical scope of military and ideological confrontation of terrorism to include North Africa, Horn of Africa, and Sub-Saharan Africa other than the current limited focus on the Levant.

- Ensure stability of MENA through eradicating Weapons of Mass Destruction (WMD) of both Israel and potentially in Iran.

- Re-integrating western fighters of the IS and other related groups in their respective societies, as MENA cannot handle their presence upon the triumph of the Egyptian efforts in combating terrorism.

- Altering the structural foundations of terrorism in MENA through economic growth. One suggestion for that is more direct investment into the Egyptian economy and establishing an US-Egyptian trade agreement instead of the current aid package.

I think the future of US-Egyptian relations is very promising, still it is now up to the foreign policy decision-makers in Washington to take advantage of the new political landscape in Egypt and the unprecedented support for the current Egyptian leader.