Smell artist? Provocateur? Professional "In-betweener"? It's hard to describe what you do when you work in the largely unchartered terrain of smell. Especially smell freed from the limiting binary of good and bad, of exotic perfumes and wine aromas.

Why is smell the most primary and primitive, and yet the most underrated sense? Can an abstract smell molecule portray or convey a specific learned meaning by itself? Can one get rid of prejudices against certain smells, and how? 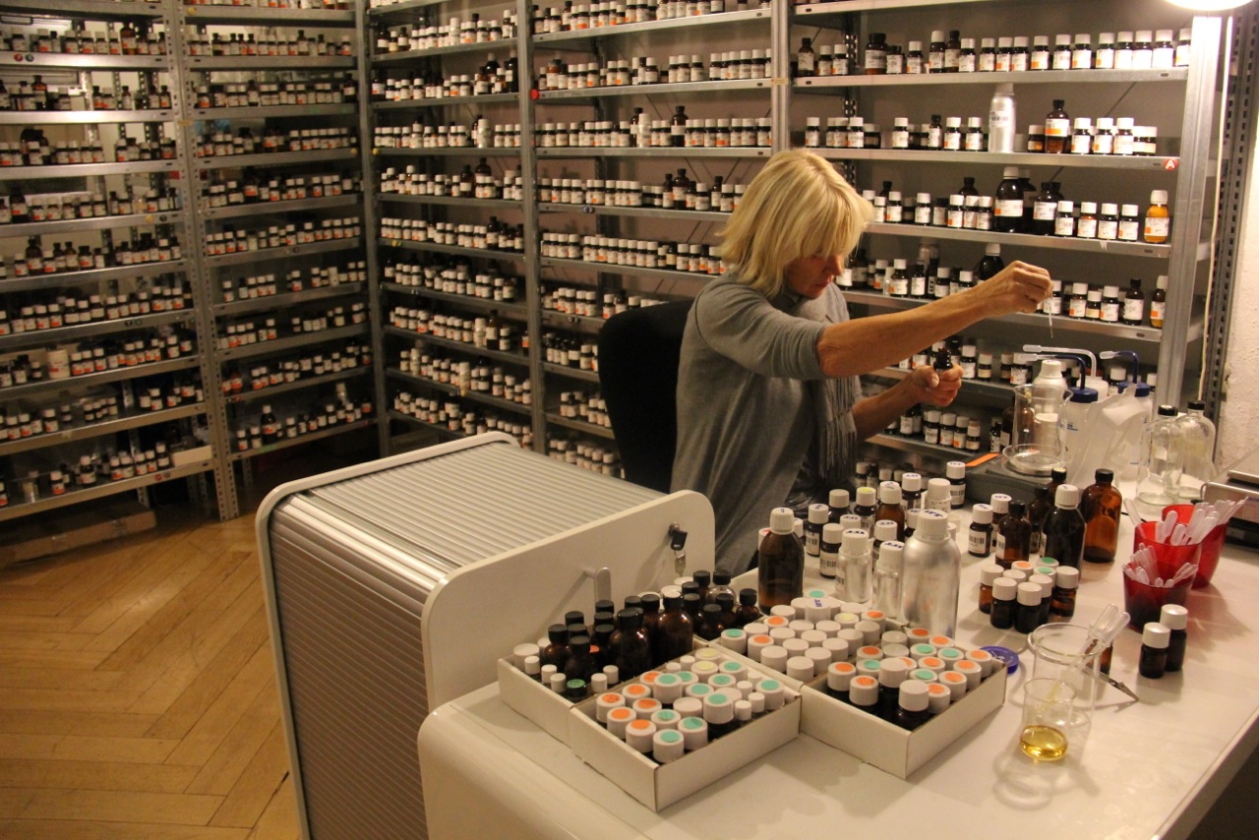 In a career spanning twenty-five years, Sissel Tolaas has raised these and many more questions, and has collected over 7000 different smells which she houses in her studio lab in Berlin. When I visited Sissel in her lab and beautiful light-filled Berlin flat, these 7000 molecules, all neatly labeled and bottled, created a heady mix which is best left without description. And I realized that here is someone who lives and breathes her work -- literally!

With a background in chemical science, mathematics, linguistics and visual art, she is one of the few people in the world who are challenging the way we perceive, learn and unlearn smell. She has bottled smells of cities around the world and created complex "smellscapes." She has explored if paranoia, like fear, has its own smell. She has explored the relationship between smell and memory and how this can help patients with a history of severe trauma. She has also been involved with numerous companies ranging from Mercedes Benz to Louis Vuitton and the Beijing Olympics.

In this interview, she talks about the fascinating world of smell and her work, against the backdrop of the World Science Fair in NYC. I caught her on an unusually hot June afternoon at this fair where she was working on a project on smell and language. She was clearly having a ton of fun working with kids who, as Sissel says, have a keener and more attuned sense of smell because they are yet to fully "learn" what we consider good and bad smells.

With over a dozen very distinct smells each placed on a set of numbered white cards, smell number three was generating the most interest. One of the kids' moms looked evidently unhappy with the smell and wanted to know what it was. The look on her face was priceless when she heard the response. Stinky socks! 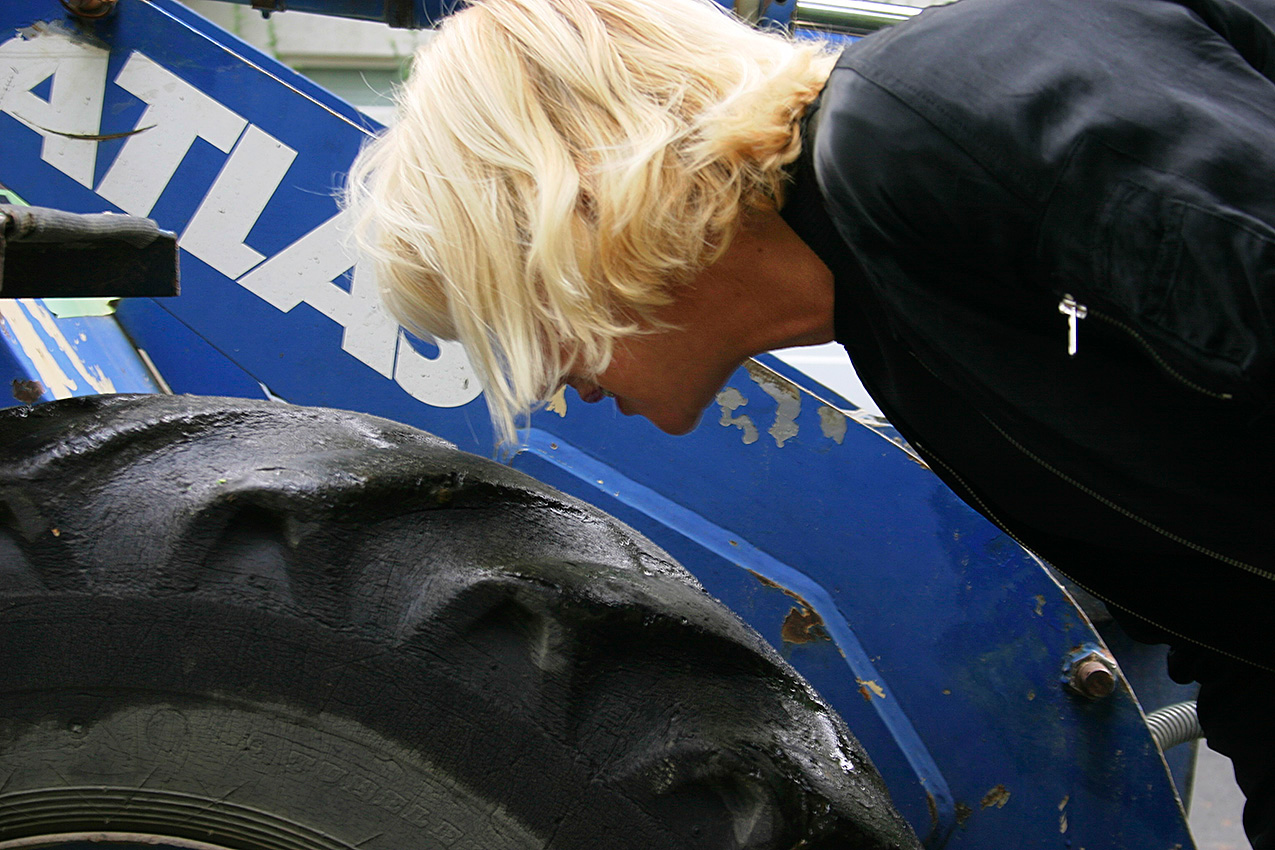 We have an amazing hardware called the body and this amazing software called the senses. We use vision and hearing to perceive reality most of the time. The nose, in our world, at least in the western world, has never been worked a lot except in relation to perfume. We communicate smell in our society through perfume ads. I think that's a shame. There's so much more that the nose can do than smell perfumes and deodorants. And when you smell, you trigger the unconscious immediately. In a few synapses, you are down there. Smell is so immense and so quick -- you smell before you see. We see that with animals. But that's also the case with humans. The processing happens unconsciously. What could happen if we make that a conscious process? So, when you enter a room and meet someone, the nose finds out everything before the eyes come around to doing, seeing or reacting.

You're one of the few artists in the world who works on smell.

I don't even call myself an artist. I call myself a professional in-betweener, because smell is everywhere. There's a whole world to smell out there. A whole world to educate how to smell. So art is too limited. I work in between research, creativity and commerce. I try to cover all those worlds. I think when you're working in the world of the nose, ambitions have to be high because there is not much done.

And you provoke. You call yourself a professional provocateur.

Yes, and I have nothing against what's done in the commercial world. But there's a lot to be done in other ways as well. Because the fact is that a handful of big companies own the knowledge of smell and taste and do this for the whole world. It's time to look into what else can be done.

Here at the World Science Fair, I clearly see that you're provoking. And that number three smell! What's interesting is that people are most disgusted by that smell and are most interested in the same.

Yes because the smell of baby powder, a rose and other such conventional smells are everywhere, people are used to them -- but the street smells, the smell of stinky socks -- these are reality smells. You would cover them up with others. So the whole project is about decontextualization of smell from reality to see what language can do. Are we able to identify without the context of reality? You take the stinky socks smell, which is synthetically replicated, out of its context and put it on a beautiful white card and smell it again and again. But if you had real stinky socks you wouldn't do that. You wouldn't have the tolerance for it. This is just one tough smell. What if there are other tough smells like the smell of another person, smells of neighborhoods that you're not tolerant to.

I've been to your studio in Berlin and your lab smells like something that I could not describe in words because it's so...

Tell us more about that collection.

Beginning in the 1990s, I decided to train my nose as I train my other senses. I couldn't find a university or an institute where I could get what I was looking for. And I didn't even know entirely what I was looking for. I knew I was headed somewhere, I just didn't know where. I asked questions about smell, tolerance, prejudice and I knew I had to collect smells from reality. And at that time I did all of that in an analog way -- to collect the smell I would collect the source of the smell! In that moment I would have a dirty sock. I canned things in boxes without oxygen so I could go back to them again and again. And there was a whole range of such smells I collected everywhere I went.

Tell us about the projects where you collect smells of cities.

I'm working on several cities at the moment -- Cape Town, Nuuk in Greenland and Istanbul -- and creating smellscapes.

And what do you explore in these projects?

What is a city beyond the way it looks and the way it sounds? The smell identity of a city is as unique as your smell identity. It's a unique signature. Composed of so many elements -- people's habits, what they eat, traffic, pollution, the climate. And I am asked to do city portraits for different purposes -- awareness, diversity, pollution issues, tolerance. The project around Mexico City is about pollution. Kansas City and Detroit are about diversity, about daring to move into other people's neighborhoods.

Well, it's very complex. I couldn't say easily what it smells like. I'm trying to be precise but not simplistic. I need to go back several times of the day and the year to make sure that the smell is permanent and not transient. So I either collect the source or go in with what is called headspace technology and collect molecules and bring it to the lab and then try to replicate the smell.

Depending on the budget and timing the number of neighborhoods vary. Mexico City was 210 neighborhoods and took 10 years. Kansas City was 5 years. Berlin was 2 years.

I was reading about a project you did where you synthesized the smell of fear and violence. Tell us more about that.

In 2006, I was commissioned by MIT to do something with new technology and the senses. That was during the Bush era in the US and a time of intense paranoia, everyone seemed to be paranoid. And I was curious to see if I can smell that people are paranoid, that human beings are afraid of other human beings, can I smell fear? So I got access to seriously paranoid people. And I collected their sweat at the time they experienced that fear. I synthesized and replicated it. Using a technology called microencapsulation, I painted their smells on the walls in an exhibit. So you don't touch the skin but you rub the wall and smell the person.

So was the sweat of people who were afraid different?

Oh yes, but that's proven in science. It's true for sweat, it's true for tears. If you cry from happiness versus sadness the tears are different. And of course animals can smell fear. Dogs will know if you're afraid.

For me, it wasn't about proving that. It was about the ability to find out certain things about what a person is feeling through a tool we've been given for free -- our nose. Can I tell from smell that you're uncomfortable meeting me? What will change about us as a society? Can we train our nose to like certain smells and hence certain people? These are the questions I am after.

You did this project with psychiatric patients where you were able to bring back a repressed memory.

We were trying to see if it's possible -- through smell -- to replicate the moment of trauma, confront you with it and train you to overcome your fear of that moment.

And it's amazing that smell is the sense that brings back that memory.

Oh yeah, smell is a sense that remains 100 percent after a year, many years sometimes, whereas vision starts fading away much sooner. We all know that the first time we smell something, it becomes the source of that smell for the rest of our life. The reference is always that source.

What's the most outrageous smell you've worn in public?

This was at the Berlinale Film Festival once where I wore a beautiful evening dress and put on a smell which was the absolute contrast -- the smell of garbage and the stench of dogshit! And people were completely confused because the way I looked and the way I smelt had nothing to do with each other. And I had the most fun time in my life! In this case the purpose of my smell was to say "leave me alone!"

Normally the role of smell in our society is to say "come to me!" but I did the opposite and I succeeded. Maybe at some point we will have smells for different purposes, the "stay alone" smell, "come halfway" smell, "come close" smell. What's wrong with that?!

Finally, for smell amateurs looking to expand their world of smell, where can one start?