For Throwback Thursday last week, I posted an old-school portrait of myself on Facebook: 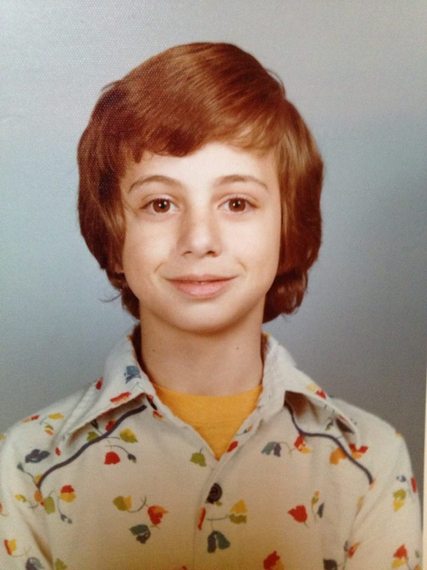 My friends and family found this picture hilarious for a variety of reasons. First, the mop of hair is funny in itself because I am Daddy Warbucks-bald today. The hairstyle emulates Shaun Cassidy's teen idol look from the 1970s, when the picture was taken, but is more like an elementary-school version of Christian Bale's 1970s comb-over in American Hustle. One friend commented that the pattern of the shirt -- bestrewn with bright flowers -- was the same as the wallpaper of her girlhood bedroom.

I had pulled the picture out from the attic earlier in the day and had not seen it in quite some time. Looking at it, I am struck by how gay I look, stereotypically gay. I mean, c'mon -- a flowered shirt with a perfectly matching goldenrod undershirt?! I am quite sure that I picked this outfit all by myself specifically to wear for picture day. Is it any wonder I was teased as a boy?

When I was in elementary school, we did not know what "gay" meant. However, the other boys sensed the difference in me -- the shirt blared it loud and clear -- and they let me know it whenever they could. It was confusing because I did not know gay was a "thing" back then. No one ever told me gay people existed, no gay characters or celebrities were on television, and there were no computers or Internet to surf. I was just a sissy boy, and I did not know there were other boys like me.

The worst thing that a boy could be told at the time was that he was like a girl. I tried to fit in. Even though I did not like sports, I joined Little League one season. This plan to be more masculine backfired because, of course, I was told that I "threw like a girl." By the time I reached junior high school, a boy taunted me after seeing me giggling with some girls after band practice (I played the saxophone): "Hey, what are you... GAY?!" I had no idea what that meant, but I could tell from the way he was asking that it was not something positive. "NO!" I answered... a little too vehemently.

The result was that I attempted to suppress those parts of myself that were perceived as effeminate. I may have worn that flowered shirt in elementary school, but by junior high, I had learned what I needed to do to appear "normal." Clothing must be drab. Do not be overly emotional or dramatic in public. Do not to use hands in too flamboyant a manner when excited. By high school, I had sublimated these energies into drama club, allowing myself to be expressive through art because that was more acceptable. My attempts at butching it up may not have been completely successful, but I fared well enough to get through high school without being bullied too harshly.

The environment for kids today is completely different. Sissy boys are labeled gay from the start, and these boys may identify as gay from a very young age. Some may have supportive parents (such as the fabulous HuffPost blogger Amelia) who promote their boys' burgeoning identities. When I was 20 and my mother found out that I was gay, she rushed to her doctor for anxiety pills and begged me never to tell my father because I would give him a heart attack. The Long Island environment we lived in was not exactly the place to be out, loud and proud, so her reaction is understandable.

Bullying is as intense as ever. It is not easier for kids today, but it is different. What I admire is seeing a boy who is effeminate remain that way into adulthood. I am a college professor, and I see male students who are just as nancy and fay as can be. I admire their strength and their willingness to be who they are. If I had not trained myself to be more "serious" and more "normal," would I have been more like them?

I lost my Long Island accent when I went away to college because the other students laughed at me. I lost my natural flamboyancy when I was in grade school because the other kids laughed at me. Stronger now, I regret altering who I was in order to please the crowd. I cannot willingly bring my accent back -- the ship has sailed on that one. But I can be more myself in terms of my willingness to be expressive or emotional or stereotypically "gay." I can say, wear, or do whatever I want. As RuPaul says, "What other people think about me is none of my business." It may have taken almost 50 years to get to this place, and I can thank today's sissy boys for teaching me to be more true to myself.