When your father is executed in a Kharkov prison for his political beliefs and you are forced to flee your homeland with your newly-widowed mother and younger brother (my father), first to Poland then on to a ravaged, post-War Berlin, is a bout with breast cancer viewed perhaps with some different perspective? All those many decades ago, breast cancer loomed with a far more lethal forecast than it does today, but with strength borne of a seasoned survivor, my Aunt took on this war too, allowing her petite frame to be bombarded with powerful, powerful x-rays. As she describes it, the cancer was fried to kingdom come but took with it the function of her right hand and arm, the nerves rendered useless. Such were the ills of aggressive, trial and error treatment back in the day.

My Aunt is now 87 and still lives on her own, keeping house for herself with the weekly assistance of her only son. My Aunt's eyesight is now also nearly gone, but at home she knows where everything is. Her outlook is cheerful, her mind and memory are clear as a bell. She is still elegant. My Aunt takes a constant delight in all things and when we talk on the phone; time flies. She counsels me on parenting and tells me stories. We have seen her the last two years in a row and will go again to Berlin in late summer, as I want to enjoy her company as much as is possible, and I want my 10-year-old daughter to have known her too.

My Aunt personifies most especially to me the beautiful, smaller things in life: ice cream or cake with coffee at the historic coffeehouses; beaded filigree made of 18k gold; the finest, hand-painted German porcelain, the leisurely art of window-shopping arm in arm. She gave me my first earrings, a pair of pearl studs, and took me and my sisters to get our ears pierced -- a quintessential rite of passage. And another thing: my Aunt and her husband didn't just love each other. They adored each other. My dapper Uncle was positively gallant towards his wife and never called her by name -- he only ever used pet names and endearments. "Winnichen," he would say. I can still hear it.

I will tell you a story my Aunt told me: While in exile, my grandmother would go from the city to the country to find work. She would ride the train out and back each day. To eat was of paramount importance, but humans were often regarded as lesser beings than the beasts in the barnyard. Such was the case with the dairy cow at one farm where she was given work. It came to pass that one day, overcome with need, my grandmother stole some cabbage leaves and carrots from the dairy cow's trough. Now comes my Aunt's favorite part of the story: When my grandmother began to sneak off, the dairy cow bellowed "MOO!" No, my grandmother was not caught, and she thanked the cow for her generosity. The soup, my Aunt adds, was wonderful. When she does the MOO, my Aunt does it with the aplomb of a character actor -- big and loud and low. It cracks her up each time, which of course makes all of us laugh.

Seeing my Aunt as I do suggests there must be a handful of damn hearty genes in our pool -- there, but for the grace of God, as they say, go we. Allow me now to wish good health -- and boatloads of strength if and when it is needed -- to all who read this, who are a part of this, who share in some aspect of the Traveling Pink Sweater and her stories and in support of this most important cause.

Read more on the Traveling Pink Sweater and stay tuned for the Sweater's next port of call, with culinary blogger Sara Croft. 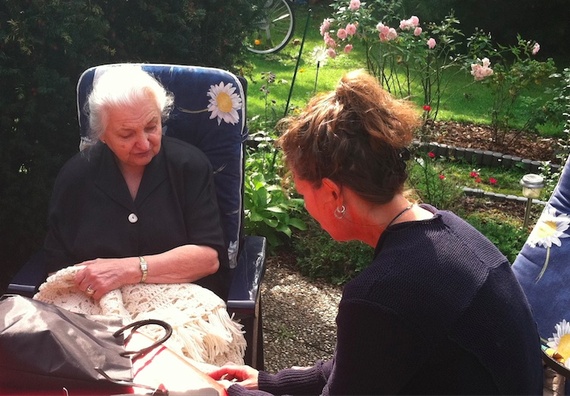