My younger sister and I were born three years apart to a mother who was once told she'd never have children. End result: We were fiercely loved and maybe even a bit spoiled. I've called Morgan my "Sister Buddy" ever since I can remember, and we still sign every birthday card, note and email that way. We have the same blue eyes, the same sunburn-prone skin (our parents made us sport matching t-shirts in the pool over our swimsuits to prevent burns -- talk about social scarring) and the same, for lack of a better word, generously-proportioned bottom that makes buying jeans a nightmare. We share something else, too: Our mom died when I was 24 and she was 21.

When you enter your 20s as a young woman without a mother, you can feel pretty anchorless. My sister and I started to drift apart accordingly; she moved to Dresden, Germany -- a place she studied abroad and the location of our last family vacation with mom -- and I buried myself in work in New York City.

A year after our separation, we took a trip together, just the two of us, to celebrate what would have been Mom's 58th birthday. What we found was that in moving 5,000 miles apart, we had grown even closer together. Here are 10 things I've learned about having a sister now that I'm in my 20s:

You can't really fight with/annoy anyone else like you can fight with/annoy your sister.
When we were little, Morgan used to steal my Barbies, decapitate them, then dangle their bodies from her four-poster bed with my hair ribbons. As a teenager, she'd be that annoying person in the backseat of the car I drove to high school who thought studded denim was an acceptable "look." You should have seen us trying to plan Christmas with Dad this year.

Yet whom did I continue to play Barbie with, drive to school and hug like hell at Christmas? Yep, my Sister Buddy.

No matter how mad she makes me, no matter how mad I make her, we know we can always be ourselves around each other -- and that kind of acceptance is rare. Besides, maybe all those years, she was just trying to get me to worry less about appearances. Barbie did look a bit more normal when her head was squished...

You see yourselves in them -- literally.
I love looking at her face and seeing bits of Mom and Dad in there; in a smile, in the way she laughs out loud or in the faux-mad death stare immediately preceding that laughter. We are the only two people on earth carrying around the same childhood, and it shows on our faces (and laugh lines).

Your little sister can be cooler than you, and that's okay.
My sister moved to EUROPE, has TATTOOS and plays the guitar and sings original songs in front of international audiences. I couldn't be prouder.

(Can you support your poor writer sister in New York now? Hook me up with a small villa somewhere warm, maybe? No? Okay.)

My sister and I shared a bathroom growing up. She'd act disgusted while I picked my skin and I'd cringe when she rubbed her teeth on towels as a safeguard against plaque (presumably -- I think she may have just wanted to gross me out.)

Now we share pie recipes, sports bras (hey, what she left at home is fair game) and stories of how we'd give mom-worthy talking-downs to any boy who dares to break our sister's heart.

Little sisters can be teachers, too.
I never knew you could swap salt and lime for cinnamon and orange when taking a tequila shot, but my newly-21-year-old sister taught me that it's possible. Not advisable, as I later found out, but possible.

I dreamed about moving abroad after college; my sister did it.

My sister and I had the same long, thick hair our whole lives -- until she shaved it off for Locks of Love. Twice. She proved bald is beautiful and taught her big sister what selflessness really means. 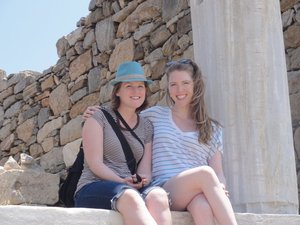 For our first trip together as "adults," my sister and I traveled through the Greek islands on an extreme budget. We shared mildewed rooms, a daily Nutella diet and amazing talks over ancient ruins.

She didn't let me flirt with those Greek men or drive an ATV around the hills of Santorini (perhaps because she remembered my lack of flirting and driving prowess from my high school days), but in retrospect, I was lucky to have a voice of reason.

Thanks, Morgan. (Georgio, call me!)

Sisters give the best gifts
Themed packages from sisters are the best. For my birthday, my sister sent me chocolate-covered strawberries and a homemade card featuring jokes about digestion (sorry, inside joke). For Valentine's Day, I sent her so-cute-it's-ugly ceramic owl kitchenware and a creepy owl alarm clock (don't ask). Whenever I walk into a store and see something that reminds me of her, I pick it up, and she does the same for me -- it's a quirky conversation in objects that shows we're never far from each other's thoughts.

Sisters change -- and that can be a good thing.
So she became vegan and can't eat at most restaurants. Now you can 'inherit' all of her leather goods and be the guinea pig for her many vegan cupcake recipes. Everybody wins.

They'll always surprise you.
My sister was a shy tomboy as a kid. That is, until she got up at the 6th grade talent show and belted out a song she had written -- all while twirling a pink feather boa. Up until then, we had never even heard her sing.

Flash forward to when I visited her in Dresden during her junior year of college. My vegan, non-smoking, non-drinking, slightly (sorry, Morgan) judgey sister drank a beer in front of me, moonwalked across the floor of a Dresden bar and confessed she was dating a boy who smoked.

The biggest change, however, was watching her nurse Mom. On the last night of Mom's life, my little sister stayed up with her, reading her favorite poetry and lying beside her on a hospital floor so she wouldn't be alone. At the age of 21, she exhibited a maturity and ability to care for others that was far beyond her years.

I look forward to watching her be a mom to her own kids someday. (But only when you're ready. I won't pressure you if you won't pressure me, deal? Love, future aunt Jessica.)

A good walk with your sister can fix anything.
We come from a family of walkers. When you live off a dirt road in a town with a population of 4,000 people, walking a few miles a day can seem pretty exciting. One summer, we walked over 10 miles to the next town, bought bottled water, and turned around and walked home. For fun.

Looking back, walking wasn't so much an exercise in filling up time as it was a way to gain critical distance from whatever was going on in our lives. While on that trip to Greece together, we realized that when I was walking around Brooklyn, alone and thinking of home, my sister was walking along the Elbe in Dresden, also thinking of home. We both used to call our Mom during those walks, but now, with the help of Skype, we call each other.

What that critical distance can't fix, the perspective of the person who knows you better than anyone else can -- even from several thousand miles away. 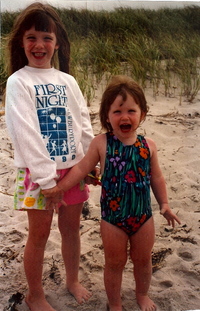