On Monday, Human Equal Rights Organization staged a sit in at Senator McCain's office in Phoenix, Arizona to encourage a conversation with the senator about Don't Ask Don't Tell. 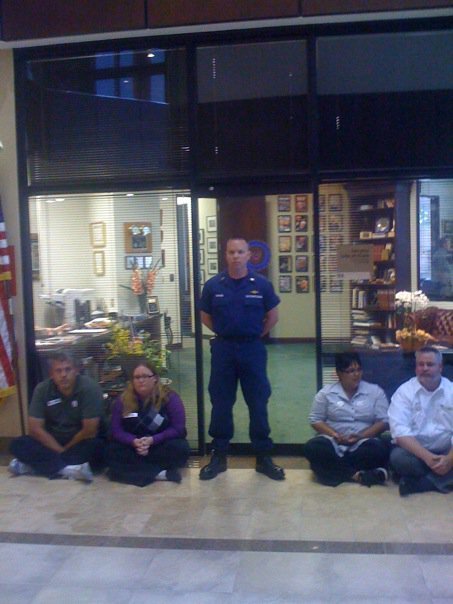 Following the President's promise during the State of the Union address to repeal Don't Ask Don't Tell this year, Senator John McCain said it would be "a mistake."

However in 2006, the Senator's point of view was different. He said, "The day the leadership of the military comes to me and says, 'Senator, we ought to change the policy,' then I think we ought to consider seriously changing it."

First Class Petty Officer Lonnie Allen Howard-Stidham served seven years with the Coast Guard before he was discharged under don't Ask, Don't Tell on June 18, 2007. He was among 5 of John McCain's constituents who participated in the sit-in.

Their goal was to sit-in until Senator McCain agreed to speak with the group. McCain never did. The 5 were arrested, cited and released on Monday. Those arrested were Meg Sneed, Jimmy Gruender, Lee Walters, (Lonnie) Allen Howard-Stidham and Luisa Valdez.

Howard-Stidham shared an open letter to Senator McCain in a press release:

As your constituent, I am writing ot urge you to support legislation in the United States Senate to repeal the "Don't Ask, Don't Tell" statue governing military service by lesbian, gay, and bisexual Americans.

I want to tell you my story and what I went through:

Since the very beginning of my Coast Guard (CG) Career our core values of Honor, Respect and Devotion to Duty have been driven into my very being; not only from the CG but also from my family. As I moved on through and graduated Boot Camp I went on to CG Station Neah Bay, and then CG Personnel Command before becoming a recruit Company Commander (AKA Drill Instructor,) by far the best and most challenging assignment I have had.

Being a Company Commander wasn't something that I thought I could do at first. I remember at my last unit people were actually taking bets as to whether or not I could fail CC school. Before I became a CC the uniform and our Core Values meant exactly what they are core values that guide us and a uniform that we were with pride. But as I went through CC school, something changed within me. I found a new sense of confidence. I believed in myself that I could do something that was so hard. And not just do it with mediocrity but setting the standard. My school chief, Chief Sparks told me that I was # 1 in the class.

As I began running companies it became apparent more than ever what the CG's Core Values meant. It had too; I had to make these recruits understand what they meant and how to put hem into their own lives. I also noticed myself focusing on the uniform. Realizing and teaching that the uniform is a privilege. Too many times we forget what this uniform means. Is it just some piece of clothing? It is something you just have to put on before you come to work? Is it just something that is require so you do it? I say NO to all of those things. It is a privilege and an honor to wear it. Words can't begin to describe what this uniform means to me. I wake up every morning blessed knowing that I GET to wear the uniform. It is a sense of Pride, Commitment, and Respect.

I had big plans for myself in the Coast Guard. I had just received orders to the 2nd national Security Cutter the CGC WASCHE which was my #1 pick, and I had just submitted my Officer Candidate package. But as I told the rest of my family I began to feel as if I wasn't showing Honor to the CG and having 100% of my integrity. That is why I wrote a letter to my Commanding Officer. Even though I knew that by writing that letter that there was a 99.9% chance I would get discharged I had to do it. I had to uphold our Core Values. I had to keep my integrity. That is what I tell my recruits, your integrity is something only you can give away, no one can take it from you.

I love the CG more than anything. What scared me the most or hurt the most... was the fact that I knew that my days to wear the uniform were numbered, that very soon that VERY privilege that I had would be TAKEN away from me. That is what hurt. Even though I got discharged I know that my legacy still lives on in the CG through all the recruits I have trained. I know that I have done my best while serving the Coast Guard. But because I am GAY I am told that I can't.

I wrote a letter to my Commanding officer, because someone threatened to "out" me, and use it as blackmail. Could I have denied it? yes! But that isn't what the CG taught me. It taught me to be truthful and to have honor. When I came out as Gay, you know what happened at my unit? Nothing! My fellow peers wrote 25 letters of recommendation, in hopes that it would help me stay in the CG. They stood beside me, they didn't treat me different at all. So Senator I ask you, should I have lied? Should I have broken the very core values that were taught to me for my own personal gain? I don't think so.

If given the opportunity I would reenlist in a heartbeat. I wouldn't even think twice. I love this country more than anything. I am asking to meet with you on Monday, April 26th, 2010 at 0815. So you can put a face to this devastating law. I am also urging you as your constituent to become a co-sponsor to the Military Readiness Enhancement Act S.3065, which was introduced to the Senate on March 3, 2010. Thank you for your time and I look forward to speaking with you.