The 20th anniversary of the assassination of the late Israeli Prime Minister Yitzhak Rabin took place last month, providing a stark reminder of that fateful November 4 for multiple generations of opportunities lost and proving to be a particularly emotional day for his son, Yuval Rabin. 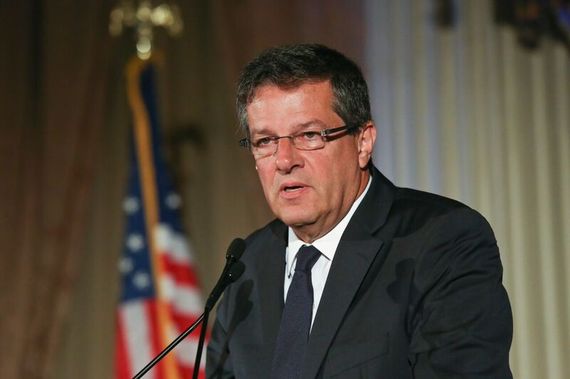 Yuval, now 60 years old, was at the prime of his adult life when his father was assassinated at a peace rally in Tel Aviv. From that shattering event 20 years ago, much has changed but much has also remained the same.

As Chair of the American Friends of Yitzhak Rabin, a New York-based nonprofit whose mission is to raise funds to support programs and initiatives that reflect and promote the legacy of the late Israeli Prime Minister, I have had the distinct honor of working alongside Yuval for more than 10 years. Yuval himself has engaged in activities that perpetuate his father's legacy, including the Dor Shalom movement and the Israel Peace Initiative, both of which he was instrumental in founding. Together, we have worked towards the common goal of advancing the legacy of his father in meaningful ways that resonate with younger people - many of whom lack the personal recollection of Rabin's vision of an Israel living at peace with itself and with its neighbors. It was this vision that cost him his life. On the occasion of the 20th anniversary of the murder of Yitzhak Rabin (and some say the peace process), I sat down with Yuval for an intimate discussion on a man he knew better than any of us, his father.

Me: The 20th anniversary of your father's assassination just recently passed. Why do you think his legacy still continues to resonate with so many even 20 years later?
Yuval: I am often asked this question and the answer is simple. The reality is that the issues that were open when my father was alive and the cause of the dispute that lead to my father's assassination are still with us. The debate surrounding Israel - the shape the country will take, its borders, its politics, with Palestinian people, the world - is still up for debate. Progress and confrontation of issues are still being avoided.

Additionally, my father's legacy is all about the fight for peace and democracy, which is something that Israel and many parts of the world, Jews and non-Jews, continue to believe in and fight for every day. All we have to do is turn on the news to see that terror and violence has a firm grip on many nations today. From the recent tragedies in Beirut, Paris and San Bernardino to the Gaza-Israel conflicts, it is evident that many of the issues that my father encountered in his life are still relevant today - two decades after his assassination.

My father was a pragmatic and proactive leader and his legacy reminds us that change is possible, albeit slow to come to fruition. Today, 20 years later, I can still visualize the look of determination in his eyes when he spoke about how open dialogue between nations, leaders and religions would bring about practical solutions for peace in the region.

Me: Did you attend any of the many memorial ceremonies for him? If so, what can you tell us about them?
Yuval: Yes, I did. Remembering Rabin has become an annual ritual but this year in particular was especially moving. I attended the President's candle lighting ceremony, the official commemoration on Mt. Herzl, the rally at Rabin Square and several other memorials. This year many more people attended events because of the 20 year milestone - including former U.S. President Bill Clinton. I witnessed thousands of Israelis and visitors from all backgrounds and walks of life - young, old, rich, poor, Jewish and non-Jewish - gather to honor my father, a great leader. What stood out for me the most this year, on the 20th anniversary of his assassination, was the fact that my father's views, whether you are for or against them, are still relevant today. What his legacy stands for is current - so while it is surprising to some that young people, many of whom were born after his death, continue to celebrate the principles and vision he stood for, it shouldn't be because the issues that surrounded my father's life and death are still critically important to the survival of the nation and sadly remain unresolved today.

Me: Why do you think it is so important to keep his legacy alive?
Yuval: There are many global issues that are affecting the shape of Israel today and what the country stands for. We will be facing challenges in the future and making difficult decisions, so we have to ask ourselves, will we be able to address these issues in a more democratic way than 1995 or will the results be tragic - like the physical violence against our leadership that we endured? What kind of place do we want to be living in? Everyone is seemingly against violence and incitement - and while it is certainly true we have to be very aware of violence and incitement from outside - we must also be cognizant of its domestic roots here in Israel. I believe internal dissension is significantly more dangerous to our democracy and our future.

Me: What was Rabin's vision for Israel?
Yuval: My father had a vision of making Israel a thriving, lasting democratic state - one that would be around for centuries, and one in which its citizens live normal lives like other countries of the free world. Specifically, he felt that it was extremely important to address internal disputes and to build internal mechanisms that will allow Israel to make important decisions - he felt that if we don't fix things internally, we would have significant problems in the future.

When I am asked this question, I often like to quote Asa Kasher, an Israeli philosopher and linguist, Professor at Tel Aviv University and Shalem College in Israel:

"From serving as Harel Division Commander (in 48) through Chief of General Staff of the Six Days War...Rabin's Legacy is the strive for Peace. From young soldier to Prime Minister, his revulsion from war is evident. Finally, Rabin's legacy is the fight for democracy. Rabin was assassinated in the midst of a political dispute vastly deviated from the acceptable moral principles of democratic rule."

To summarize Kasher, my father's legacy can be explained in three specific layers:

Me: Many speak about the Oslo Accords as a mistake. Do you agree? And if not, what do you think the reality would be today without the Oslo process.
Yuval: I have to admit that I do take personally the criticism commonly expressed about the alleged failure of Oslo, attributing the terror and its victims throughout the last 22 years to my father and Olso. While these accusations are commonplace, clearly they are amplified at times of outbursts such as what we are experiencing these days.

There was terror before, during and after Oslo. Terrorists on both sides of the table, yes, even Jewish terrorists have tried and continue to try to sabotage the efforts for peace.

Let's also not forget that terror didn't start in 1992 when my father was elected and he didn't inherit a clean slate. Israel had prior commitments, treaties etc., and thus Oslo was a result of many different factors. I think we have to look at the facts to answer this question.

Nobody knows what the world would have been like had Oslo not been signed. Israel's situation could have been much worse without Oslo. Much can be attributed to Rabin's vision and actions, and Israel remains a stable force in the region even 20 years since his assassination. What we do know is that in the aftermath of my father's murder, there has been a definite lack of leadership committed to building a peaceful future on both sides of Israel's borders.

Me: What do you think was your father's greatest accomplishment?
Yuval: It's really hard to name just one. I have to be honest; I don't answer this question the same way every time. I think his greatest accomplishment was his coherent, transparent, consistent, pragmatic and proactive leadership. He was "the most analytical leader I ever dealt with," recalled Dennis Ross, American diplomat and author.

I think throughout his career he had a very clear, strategic perspective. For example, in 1992 at the age of 70, my father, a pragmatist, a realist, was finally given the mandate to develop a real, sustainable future for a socially torn and divided country worn-out by low and high intensity wars. There was widespread neglect of Israeli people, a decayed infrastructure and failed education and healthcare systems. My father stepped into power with the understanding that military use is only a means, not an end, to solving these pressing issues - this was a theme throughout his entire life and career.

Me: Education was very important to your father. Why do you think that is?
Yuval: His focus on education can be attributed to the way he was brought up - he always had a high social awareness and realization of the rights of everyone. He felt strongly that Israel, without natural resources, needed to maintain its edge through its people as we are only a population of 8+ million surrounded by vast populations, many of whom are hostile. The only way a country like ours can survive is if we can maintain a specific uniqueness - and that comes through education - knowing how to succeed in military, scientific and social aspects of life. My father saw education as a means for survival and for equality and hence why it was always of the utmost importance to him.

Me: If your father were alive today, what changes do you think he would want to see made in Israel? In the world?
Yuval: If he were alive today, he would want to see a continuation of what he originally started and the fruition of everything he worked for - peace, tolerance, democracy and a thriving Israel and world that uses their words not their weapons to find solutions to disputes and disagreements. It is for that reason I've devoted much of my time since the assassination to some of what I believe he would have pursued.