A sudden commotion behind me grew louder and closer. Angry, menacing voices escalated into a hailstorm of vicious heckling, all of it directed at the back of my head. I tried not to flinch. A man's heavy breathing, loud and ragged, was inches from my right ear. I closed my eyes for a moment, as if shutting down one sense would somehow shut down another. The threats grew. Suddenly there was a violent jolt as if someone had kicked my chair. I'd had enough. I tore my headphones off.

I looked over at my two teenage daughters, who were sitting next to me at a replica of a 1960s lunch counter in the Deep South, at the National Center for Civil and Human Rights in Atlanta. The interactive exhibit, which asks the question, "How long would you last?" gives visitors an auditory simulation of what it was like to participate in a sit-in during the civil rights era. My daughters still had their headphones on, but both of them had their eyes squeezed shut. Finally, the tape finished, and they, too, took their headphones off. We looked at each other in silence, and then stood up, a bit shakily.

The lunch counter exhibit in Atlanta was part of a tour of civil rights museums my husband and I recently took our children on. We figured our kids would not only learn a lot; they'd even find the trip enjoyable. The museums, which are relatively new, and for the most part cutting-edge, are full of interactive and multimedia exhibits that attract and hold kids' attention. Moreover, the story of the movement is inspirational and fascinating, peopled with towering moral leaders and courageous ordinary citizens.

We decided to concentrate on museums, rather than landmarks, figuring the kids would get more out of them. Interest in these sites is strong. The National Civil Rights Museum in Memphis, which just underwent a multimillion-dollar renovation, has more than 200,000 visitors each year. The Birmingham Civil Rights Institute attracts 145,000 annually. You don't need to see them all -- it would be quite a drive -- but each museum has a slightly different emphasis and different exhibits. Want to visit a few and need help keeping it all straight? Just download the Alabama Civil Rights Trail or the Freedom Lifted app from the iTunes app store.

Here are some of the possibilities:

National Center for Civil and Human Rights
Located on two-and-a-half acres of downtown Atlanta real estate donated by Coca-Cola, the museum opened in June 2014 and features three galleries: one that showcases the fight for equality in the United States in the 1950s and 1960s, one that continues the story by focusing on ongoing human rights struggles around the world, and one that houses a collection of papers and artifacts from Dr. Martin Luther King, Jr. "It's amazing to see his handwriting and notes," my husband remarked to the young security guard in the room, who smiled and responded, "Sometimes I just kind of wig out looking at them." 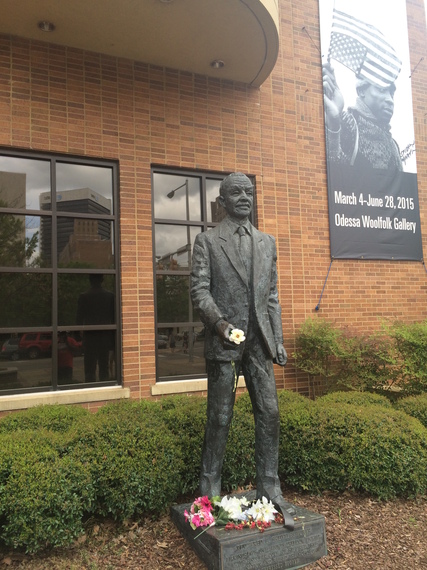 One of the oldest and largest (it opened in 1992 and takes up 58,000 square feet) civil rights museums in the country, the Civil Rights Institute uses multimedia exhibits and striking tableaux -- for example, side-by-side segregated classrooms, in which the black children's classrooms have battered desks and not much else, and the white children's have shiny new books and a motion-picture projector -- to tell the history of African-American life and how Birmingham became a battleground in the struggle for civil rights.

The Institute is directly across the street from the 16th Street Baptist Church, where four young girls lost their lives in a bomb blast in 1963, and faces Kelly Ingram Park, where earlier that same year, the public safety commissioner, Bull Connor, ordered the use of fire hoses and police attack dogs against civil rights protestors, many of whom were children. The park has commemorative statues of Dr. Martin Luther King Jr., Rev. Fred Shuttlesworth and other heroes of the civil rights movement, as well as other installations along a "Freedom Walk," including one of snarling police dogs, one dedicated to the Children's March, and one memorializing the four girls killed in the church bombing. There is a free audio tour for mobile phones (call-in number is 205-307-5455). 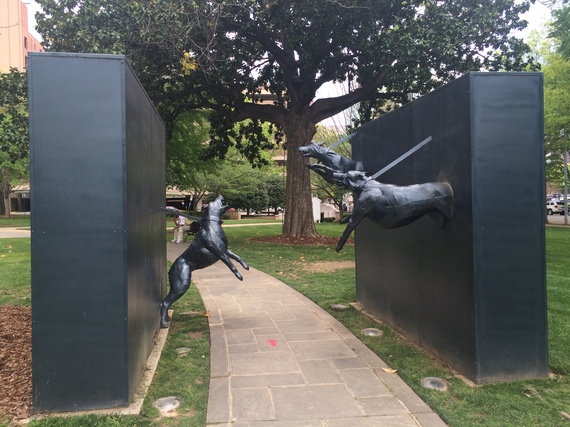 National Civil Rights Museum
The National Civil Rights Museum in Memphis re-opened on the 46th anniversary of Dr. Martin Luther King Jr.'s assassination, and is filled with archival videos, interactive touch screens, life-size exhibits. There's a replica of the Supreme Court room where arguments were heard in the Brown v. the Board of Education case, an audio exhibit featuring the voice of Malcolm X and a replica of a jail cell where visitors can hear King read portions of his famous "Letter From Birmingham Jail." The museum takes visitors on a comprehensive tour of the civil rights movement, and culminates in the Lorraine Motel's Room 306, the actual room King stayed in the night before he was shot. The experience is jarring, painful and unforgettable.

Bill Clinton said of Rosa Parks "Let us never forget that in that simple act and a lifetime of grace and dignity, she showed us every single day what it means to be free." Located by the bus stop where Parks was arrested, the museum celebrates her heroism and legacy and depicts the story of the Montgomery Bus Boycott and the early Civil Rights movement. There is a moving multimedia reenactment of her refusal to give up her seat as well as historic documents, audio/visual materials and interactive exhibits. The guided tour is informative and compelling. 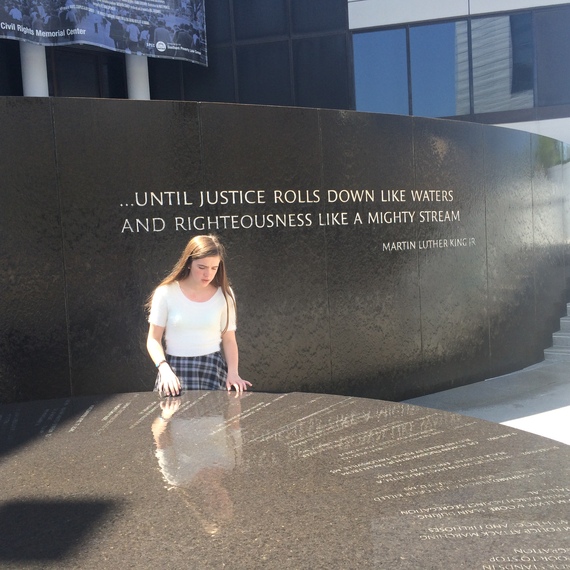 Visitors can add their names to the Center's Wall of Tolerance, which digitally displays a continuous loop of the names of more than half a million people who have pledged to take a stand against hate and to work for justice and understanding. There are exhibits about martyrs to the movement, and a movie about them as well, including Emmett Till, a boy accused of flirting with a white woman. He was beaten to death and thrown in a river in 1955 in Mississippi. Afterward, visit Maya Lin's memorial outside, where the names of 40 people who died in the struggle are inscribed on a circular, black granite table that details the history of the movement in lines that radiate like the face of a clock. Lin left a blank space between the first and last entries on the memorial timeline to signify that the struggle for human rights began before 1954 and continues to this day. Water gently burbles over the stone.

The memorial has been called "poetry in granite," by Caroline Goodman, the mother of Andrew Goodman, a young civil rights worker who was slain in Mississippi, and we, too, felt its quiet power. It's a peaceful place. My 14-year-old daughter ran her hands under the water and over the names inscribed on top, as visitors are welcomed to do. "Emmett Till was my age," she said quietly.

A group of middle school students showed up, giggling and jostling each other as we headed to our car. I glanced back over my shoulder and noticed that they, too, were now quiet and running their hands through the water, over the names.

Writer and editor. Lives outside D.C. with her husband, three teenagers and two indifferent cats.