A few days ago I had to begin using fingers on both hands to tally the count of economic and institutional powerhouses speaking out for strong governmental action to avert climate catastrophe. That's when I learned that giants in the global food industry had jointly issued their own prophetic call-to-action.

By my reckoning that makes at least six: the U.S. Military plus five major industries: Insurance, Finance, Fisheries, Forestry, and Food. All six are MIFFFFed that governments have thus far failed to foster a level playing field to motivate an all-industry, all-nation surge toward renewable energy.

Equally, it is apparent that these military and business leaders are not just rallying for sound business incentives. They are parents and grandparents who care deeply about the future their kids and grandkids will face.

The links and notations below point to key statements by the MIFFFFed industries. Together, they bring formidable pressure for participants at the upcoming U.N. Paris Climate Summit to reach agreement for aggressive actions on behalf of present and future generations. 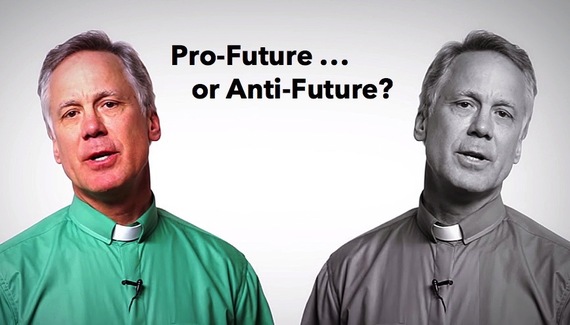 1. MILITARY: "National Security and the Accelerating Risks of Climate Change" - May 2014 by CNA Military Advisory Board (16 retired USA generals)

This 2014 report begins, "The nature and pace of observed climate changes - and an emerging scientific consensus on their projected consequences - pose severe risks for our national security. During our decades of experience in the U.S. military, we have addressed many national security challenges, from containment and deterrence of the Soviet nuclear threat during the Cold War to political extremism and transnational terrorism in recent years. The national security risks of projected climate change are as serious as any challenges we have faced." (See also The New York Times coverage.)

See also statements in "Mutually Insured Destruction: Why the reinsurance industry wants to change the way we think about climate change" - August 27, 2013, The New York Times

3. FINANCE: "One of the World's Most Powerful Central Bankers Is Worried About Climate Change" - September 30, 2015, New York Times

Video and full text of Mark Carney's speech at Lloyd's of London is available on the Bank of England website: "Breaking the Tragedy of the Horizon - Climate Change and Financial Stability". See also IMF director Christine Lagarde's headline-grabbing statement in 2013, in which she cast climate change as "the greatest economic challenge of the 21st century". She elaborated, "Unless we take action on climate change, future generations will be roasted, toasted, fried and grilled." See also former U.S. Treasury Secretary Henry Paulson's 2014 op-ed in The New York Times, "The Coming Climate Crash: Lessons for Climate Change in the 2008 Recession".

In an open letter to "U.S. and Global Leaders," the 10 CEOs jointly pledged to "use our voices to advocate for governments to set clear, achievable, measurable and enforceable science-based targets for carbon emissions reductions."

The academic and governmental researchers who translate climate scenarios into projections of forestry consequences are publishing papers that veritably scream alarm within the rigid contours of objective prose. Unprecedented forest fires in California and Alaska and massive and sudden deaths of heat- and drought- stressed trees in western North America are just the tip of the iceberg of what will surely follow -- unless business, the public, and those empowered to legislate governmental shifts make reducing carbon emissions a priority.

6. FISHERIES: Because the vast ocean commons were under assault from overfishing decades before the climate catastrophe of our atmospheric commons captured headlines, fisheries great and small are accustomed to end-game strategies. Ocean heating and acidification are therefore not extraordinarily motivating concerns. But they are to all those who love the oceans and care about continuing livelihoods and food for coastal populations. Among them are the ocean researchers and ardent spokespersons Sylvia Earle and Carl Safina.

Finally, there is one economic powerhouse industry with an enormous stake in climate change -- but for contrary reasons. Fossil fuel corporations are concerned that climate change may run them out of business even before "Peak Oil" does. Witness the 2015 bankruptcies of coal companies. Witness the success of the fossil fuel divestment movement -- first on moral grounds and then for prudent stock portfolio management.

Paris calls for an historic level of cooperation and commitment to a just and healthy future. Never have the stakes been higher. The opportunity is for citizens, industry, religious leaders, and governments to join hands and agree to real and measurable limits to growth and an all-out mobilization to combat climate change. Nothing else is sustainable; anything less betrays God and future generations.

WHAT CAN YOU DO? In addition to whatever you and your family are doing at a personal and local level, I also highly recommend the Climate Mobilization and the Association for the Tree of Life's "Ask Philanthropists" campaign.