Mark Kantrowitz, Publisher of Fastweb.com and FinAid.org, published a new paper this week titled "Who Graduates College with Six-Figure Student Loan Debt?" It uses information from data analysis systems for the 1992-93, 1995-96, 1999- 00, 2003-04 and 2007-08 National Postsecondary Student Aid Study to look at students who graduate with more than $100,000 in student loan debt.

Kantrowitz said news articles about students graduating with six-figure debt levels are alarming but not the norm.

"These stories have shock value and sensationalize the student debt problem, but the borrowers depicted in these stories are not representative of typical college graduates," Kantrowitz writes, going on to add "Nevertheless, much can be learned by examining extreme examples. Extrema can help identify the strengths and weaknesses of the student loan system."

Unsurprisingly, students from high-income families are less likely to come out with these extreme student debt levels. Yet, low-income students are also less likely to graduate with six-figure debt levels than students from middle-income households. This is likely to have a connection to poor students being eligible for more need-based aid; including scholarships, subsidized student loans and Pell grants. A similar case plays out for veterans; presumably because they have generous benefits from the government to help pay for college, very few come out with six-figure debt.

Students who borrow from private student loan programs are more likely to graduate with six-figure student loan debt, Kantrowitz found. Private loans only make up about 15 percent of the student loan market, but these private lenders reported to be providing 592 percent more in 2007-08 than they did a decade earlier. Private loans were also flagged in a recent Consumer Financial Protection Bureau study as mimicking trends of the subprime housing crisis which helped bring about the Great Recession.

Kantrowitz's paper revealed a very similar trend in massive debt loads as with the overall student loan trends. An extremely small amount of students had six-figure loan debt, but according to the paper, no undergraduates had student debt levels that high until 2003. It has increased significantly over the past decade, which would follow federal reserve data showing the consumer student loan debt increasing 275 percent from 2003 to 2012.

Kantrowitz does have some suggestions for how to beat this extreme debt problem. For instance, federal and state governments need to stop cutting appropriations for higher education institutions and grant aid -- it's putting the pinch on low and middle class families and harming government budgets in the long term.

"These problems manifest themselves first among low and moderate income students," Kantrowitz says. "Cutting federal and state support of postsecondary education is short-sighted. For example, people who have Bachelor's degrees pay more than twice as much federal income tax as people who have just a high school diploma."

Kantrowitz also recommends the U.S. Department of Education do a better job monitoring "basic heartbeat statistics" concerning student debt, and requiring more disclosure summarizing the loan repayment process. He also recommends limiting how much someone can take out in student loans based on the projected salary for their field of study. His paper found undergrads majoring in theology, architecture and history are "much more likely to graduate with six-figure student loan debt than students majoring in other fields of study." These are certainly not career areas that are expanding. 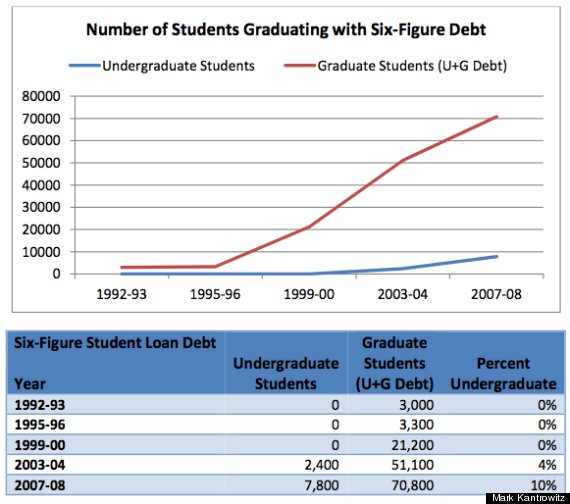