It may not always seem like it, but this is a golden age of imagination and invention. That's not to say that the world isn't sick with violence, poverty and misrule. It surely is. But, long ago, our species of great ape left the others far behind, reinventing ourselves as explorers, builders, communicators, artists and dreamers. That's never been truer than today, as creative minds toil in the service of the planet and others.

Because climate change, poverty, and famine are complex worldwide problems, they're inspiring equally complex, world-changing solutions. It's now possible to pursue a career in, say, engineering, and make a good living, while also helping to reduce poverty, feed the hungry, preserve biodiversity, and rein in climate change. Never before have we been so dangerous to the planet and ourselves, or so capable of cooperating on peaceful solutions.

What has changed? Not one thing, but many. Thanks to globalization, local news trends worldwide in a flash. The sheer number of people on the planet means exponentially more brainpower; so, as a species, we're sparking many more ideas. Thanks to the digital revolution, people are busily batting ideas around the Internet, where they carom and entangle like subatomic particles.

The looming shadow of climate change, urgent and visible everywhere, is rallying people to action. There's been a groundswell of do-good capitalism (green start-up companies, big business switching to green practices), a crop of investment houses featuring only sustainability and humanitarian projects, and many for-profit social enterprises popping up. Unlikely partnerships are ensuing between corporate giants like IKEA and indigenous peoples. Every week I learn of more jaw-dropping feats of creative problem-solving. Most are economically savvy, while also being environmentally adroit and compassionate. Here are my six favorites at the moment:

ONE. Soccket, a soccer ball that generates electricity whenever it's tossed or kicked. One fifth of humanity, 1.2 billion people worldwide, either don't have electricity or rely on dirty power sources like kerosene and diesel that create health hazards and spew greenhouse emissions. They need cheap, clean, off-grid sources of energy that can be used anywhere. In play, as the Soccket ball spins round, an internal pendulum stores kinetic energy. Dribble and pass the ball for 30 min minutes and it will power an LED light for three hours.

Distributed in poorer areas of Brazil, Mexico, and South Africa, it only weighs an ounce more than a regular soccer ball, is just as lively, and doesn't need to be inflated. The company also fields sustainability-gurus, who teach a curriculum of "out of bound" thinking, using local resources "to inspire social invention."

I love that its design company, Uncharted Play, was founded by two juniors at Harvard, and their R & D is funded, aptly, by a kickstarter campaign. They state proudly on their website: "We make play products that generate renewable energy and inspire social invention. . . Doing good doesn't need to be boring." Nor unhealthy.

They also make energy producing jump ropes. And, if you prefer, there are energy-storing teeter-totters. Powering the world during play -- the brain's favorite way of learning -- they provide cheap, clean energy, but they also help people stay active, healthy, playful, and self-reliant. Picture a playground of kids who know -- however young or seemingly powerless -- that they're bringing power and light to their families or neighbors. On the same path, Solepower just came out with a thin shoe insert that you slip into your shoes like so many others. Except that this one builds up energy with each step and stores it in a small battery. Walk or hike by day, and you can light your way when night falls.

As with the Soccket ball, this design will no doubt have a vogue the world over, especially among people who can't be bothered traveling with cellphone chargers, but its target is poorer people and villages without power, while helping with climate change by reducing the need for kerosene, diesel and other pollutants.

TWO. What's not to love about a structure that eats smog? A hospital in Mexico City has unveiled its new façade of tall grey lattices pocked with round and oval portholes. Elegant and modern, the open framework easily passes for architectural chic. But, instead, picture a building that silently purifies the air all around it, neutralizing the pollution from up to a thousand cars a day. Picture sidewalks around it paved with the newly-invented smog-absorbing cement. 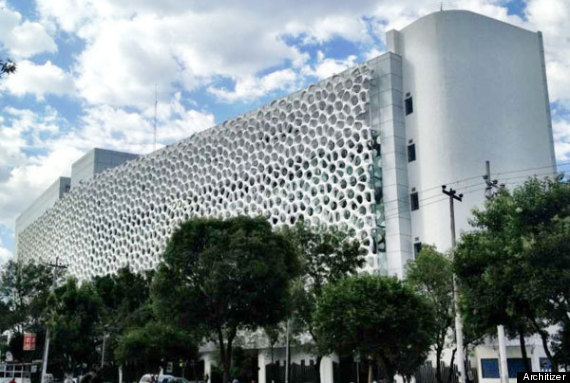 THREE. Another favorite of mine is the urban algae farm -- a prototype for cities everywhere -- that clung to a highway overpass in Geneva, Switzerland this year. A green slush of algae played through transparent pipes, thriving on all the carbon dioxide belched by the traffic below. Designed by the Dutch firm Cloud Collective, it shows how, even amid urban blight too bleak for conventional gardens, a wealth of food and biofuel and raw materials can be grown, unobtrusively, while also filtering CO2 from the air. The firm chose the site because it's "particularly violent and quite out-of-tune with the idea of the garden as a peaceful natural haven," thus proving that even an expanse "of highways and car dealers -- despite their anonymous and generic character -- can play an important role" in the production of food and fuel. 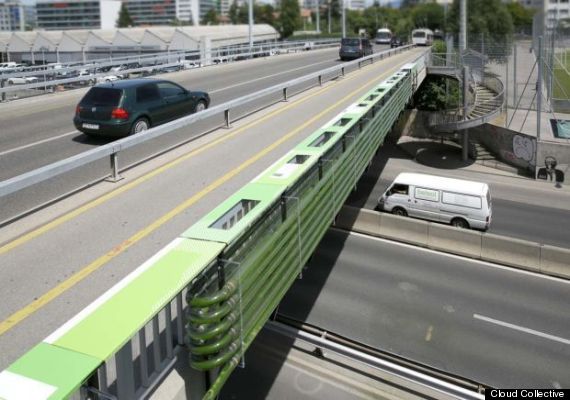 FOUR. Every week seems to bring new advances in solar energy. The world's first solar bike path will soon be opening in the Netherlands, along with the world's first solar highway. As we're swiftly becoming an urban species, think what turning most of the world's travel ways into cheap solar energy collectors could mean. Last week, CSEM, a nonprofit Swiss technology company, revealed white solar panels that become part of the walls (instead of perching on the roof). In the past, solar panels were beetle-black to absorb more sunlight. But CSEM is coating panels in a plastic that scatters all visible light -- and so appears white to our eyes -- while letting through the infrared.

What's blue-ribbon about this is the virtuoso flare of psychology, physiology, industrial design, nanotechnology and engineering all working together on a global problem. It doesn't offend our esthetics the way plastering solar panels on walls does, and so it offers architects creativity; it exploits the unique physiology of the human eye; the engineering draws on nanotechnology; because they're white, the solar panels run cooler and more efficiently; they can also be used to coat and power buses, phones, laptops, and other facets of our technological lives.

Another small solar advance with big prospects for changing daily life: the solar-powered backpack project, Repurposed Schoolbags, founded by two young female South African entrepreneurs. Made from recycled plastic shopping bags, they're distributed to children too poor to afford book bags, who must travel long distances to school. As they walk, a solar cell gathers energy they can use at home later while doing homework.

FIVE. "Tastes Like Chicken." The start-up, Beyond Meat, is pursuing the goal of creating a truly-palatable world-pleasing meat substitute. Other companies already have, but not with great results. But Beyond Meat's new approach is high tech. Taking plant proteins from soy and peas, it's revising the molecular structure through heating, cooling and pressure, so that it closely resembles meat tissue. This isn't just to pamper the vegetarians among us who aren't in league with seitan, but to reduce the superabundance of giant farms. Factory farms have replaced countless acres of much-needed CO2 sequestering forests, while vast invisible clouds of flatulence from all the livestock also contribute methane pollution to the atmosphere.

SIX. Artificial reefs. In The Human Age, I wrote about scuba diving in the Caribbean on two occasions 20 years apart, the tragic loss of coral reefs worldwide, and various efforts worldwide to restore or replace them. I just learned about the work of sculptor-environmentalist Jason de Caire Taylor, who was commissioned by the Underwater Museum of the Caribbean to create beautiful, thought-provoking sculptures that also function as coral reefs that change color and surface texture as corals grow, fish maneuver, and reef life blooms.

Our inventions have always reinvented us, en masse, as a species, rich and poor alike. Language, cooking, sewing needles, agriculture, stirrups, medicine, science, industry -- all of it has changed our evolution in intriguing ways.

For example, with agriculture's grainy diet our teeth grew blunter and our average height dropped. The saga continues today, as we invent nonstop, inventing new inventions to offset the climate ills caused by some of our past inventions. That makes this a dangerous, but also an inspiring world to inhabit.

Disciplines such as engineering and industrial design are widening their scope to address climate and poverty problems like never before. It's an exciting era to come of age in. Riddled with frights, yes, but also thick with possibilities.

PHOTO GALLERY
The Future Of Cities
Download
Calling all HuffPost superfans!
Sign up for membership to become a founding member and help shape HuffPost's next chapter
Join HuffPost 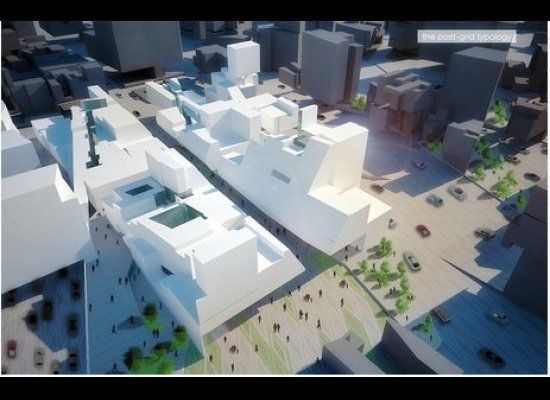 1 / 17
Adaptive Grid
<a href="http://www.experimentsinmotion.com/projects/5/" target="_hplink">New streets of New York shift and change topography based on the needs of drivers and residents. </a>