As we struggle to comprehend the numerous tragedies this country has seen in recent years, we have a choice between continuing acrimonious public discussion or adopting peaceable, respectful communication. Behavioral science has produced a wealth of knowledge about how to prevent or resolve conflict. This knowledge can help us move toward a peaceful, caring society. We suggest six straightforward principles that could improve human relations and solve problems effectively.

First, become adept at taking others' perspectives. This is not the same as agreeing with them. It simply means paying attention to what others think and feel and taking the time to learn about their situations without judging them. When we do this, we are more likely to understand and feel some empathy for them, and they are more likely to reciprocate.

Second, learn to step over others' aversive behavior. Our natural, wired-in response when someone does something we don't like is to criticize, argue, threaten, or move away from them. People who are adept at ignoring others' annoying behavior and affirming their positive attributes bring out the best in others and avoid unproductive conflict.

This leads to the third principle: increasing positive reinforcement of behaviors we want. Although positive reinforcement has a bad name in some circles, we're not referring to stickers, food, or money. We mean listening, smiling, praising, and recognizing what people do that we would like to see more of. Over the past 10 years, educators have greatly increased positive reinforcement for diverse forms of prosocial behavior in schools. Positive Behavioral Intervention and Support is a school-wide system for moving from punitive approaches to behavior and toward reinforcement of positive behavior. Over 21,000 U.S. schools use it.

Similarly, our friend and colleague Dennis Embry has trained more than 10,000 teachers to use his PAX version of the Good Behavior Game. When played in early elementary school, the GBG has contributed to academic and social success even into adulthood.

As we begin to affirm others' positive behavior, they will become more open to us. Psychologists Geoffrey Cohen and David Sherman recently summarized several studies showing that people become less prejudiced toward others and more willing to listen to them after first affirming their positive qualities.

The fourth principle concerns noticing models of prosocial, cooperative, loving, positively reinforcing, forgiving, and supportive behaviors. When is the last time you saw a politician praise the work of someone from a different party? If our political leadership leads by example, they are leading us in the wrong direction. We should celebrate those who try to unite people, acknowledge the positive action of those with whom we disagree, and forgive others who have wronged us. Witness the forgiveness given by the families of those slain at the Emanuel African Methodist Episcopal Church in Charleston and the reaction of the Amish who cared for the family of Charles Roberts after he killed five little Amish girls in Pennsylvania.

The fifth principle is to give better attention to our values. Start with the most basic. Wouldn't it be reasonable for our society to want everyone to live long, healthy, and productive lives? If you begin with this simple goal and recall the things that will shorten our lives and undermine our wellbeing, you very quickly realize that any frequent stressor is harmful. Those who are most embroiled in conflict are also experiencing stress. The three groups who need our greater concern are people of color, police, and poor white people. These groups experience a very high stress rate that affects their health. 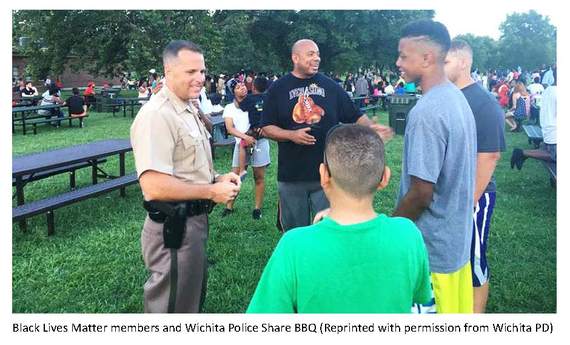 If your only goal is to increase the safety and wellbeing of your group, you will want to promote the wellbeing of these other groups -- even if you have strong negative feelings toward them. Why? Because by helping them, you will help them decrease their hostility toward your group.

The sixth principle is pragmatism. Pragmatists aren't strongly attached to their beliefs but they do act in keeping with their values and they evaluate their beliefs in terms how much they support their valued outcomes. You may dislike the views of another person or group, but acting on that aversion is unlikely to encourage great peace and reconciliation. Acting on these six principles could.

Most Americans are not personally involved in the tragedies that have been shocking this country. But everyone can contribute to rebuilding a society that cares for the wellbeing of every member. We did it during WWII and we can do it now. We can create a society with a higher level of wellbeing than America has ever achieved.

To make a difference for yourself and those around you: