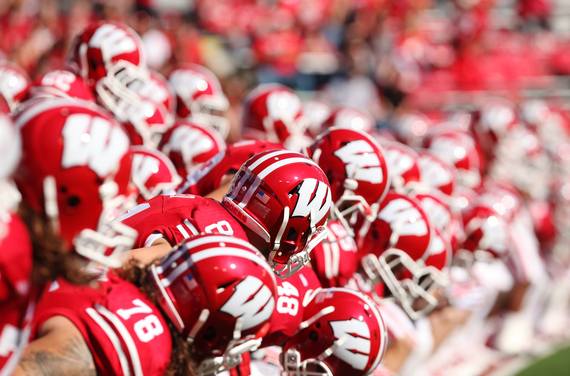 On November 26th, the nation's highest-profile pollster -- Nate Silver of the New York Times -- gave ten teams a better chance of making the inaugural College Football Playoff than University of Wisconsin. Of course, it's really just seven teams; the Badgers only need to claim the fourth playoff spot, so neither they nor their fans care if three of Silver's ten teams make the playoffs ahead of them. With that in mind, it's time someone pointed out that of those seven teams (Arizona, UCLA, Georgia, Mississippi State, Baylor, Ohio State, and TCU), three (UCLA, Georgia, and Mississippi State) have now lost a game since Silver ran his data, putting them outside the playoff picture. A fourth team (Ohio State) will of course fall behind Wisconsin if it loses to the Badgers in the Big Ten championship game in Indianapolis next week.

If Wisconsin beats Ohio State this coming Saturday -- a premise made more likely by the season-ending injury suffered by Ohio State starting quarterback J.T. Barrett on Saturday -- there will only be three teams left (Arizona, Baylor, and TCU) between Wisconsin and a berth in the first-ever four-team playoff in college football. But Arizona is almost certain to lose its game to No. 2 Oregon next week -- and if it doesn't, that win would leave Oregon out of playoff contention, thus putting the Ducks (rather than Arizona) behind the Badgers. There's also a reasonable chance Baylor will lose next week to No. 12 Kansas State, though even if it doesn't, the winner of next week's Baylor-Kansas State game will be hurt -- as TCU will be hurt -- by the fact that the Big 12 doesn't have a championship game. As between Baylor, Kansas State, TCU, and Wisconsin, only the Badgers (assuming a win next week) would be able to boast a Power 5 conference championship on their playoff CV.

While one team presently ranked behind Wisconsin -- Georgia Tech -- could still make their own case for playoff inclusion, if Georgia Tech beats No. 3 Florida State next week (which it would have to do to make the playoffs) it would, much like an Oregon loss to Arizona, put a team currently presumed to be a shoo-in for the playoffs out of the picture. In other words, No. 16 Georgia Tech beating Florida State helps the higher-ranked Badgers as much or more than it helps Georgia Tech. On a similar note, if No. 1 Alabama loses in the SEC Championship Game to No. 17 Missouri, Missouri still wouldn't find its way into the playoffs -- but Alabama might well drop out of them.

In view of the above, it seems surprising that Wisconsin hasn't been much discussed in water-cooler conversations about the 2014 College Football Playoff. It may be that fans are waiting to see if Wisconsin can beat Ohio State; the problem, of course, is that midnight Saturday will be much too late to begin making a case to the nation and the CFB Playoff Committee whose final resolution will be determined just a few hours later. With the final CFP rankings due to be released this Sunday, if the surprisingly strong case for the Wisconsin Badgers making the College Football Playoff if they beat Ohio State is going to be made, it needs to be made right now.

The short-form summary of the case for the Badgers goes like this: a Power 5 conference champion with a top-ranked defense, likely Heisman winner, and Coach of the Year semifinalist, which also happens to be the hottest team in FBS football -- assuming an Ohio State win next week, Wisconsin would have won eight straight games, with a stunning seven of those wins against bowl-eligible teams -- deserves to be one of the four teams playing for a National Championship. The usual argument against the Badgers, that the Big Ten is a conference in decline, has lost its purchase since the conference began playing some of its best football in years. The Big Ten stacks up nicely against the other Power 5 conferences in almost any measure you could name. An argument more specific to Wisconsin -- that it has two losses -- is hindered not just by the fact that those losses came very early in the season (and the CFB Playoff Committee has emphasized recent performance), but also by the fact that one of those two losses can't really be charged against the Badgers at all.

1. The Big Ten Is Strong This Year, Which Means Its Conference Champion Should Make the Playoff. Based on the number of its teams in the CFP Top 25, the relative ranking of those teams, its FPI strength-of-schedule, and its success in non-conference games against bowl-eligible Power 5 teams (and Notre Dame), the Big Ten is either the third- or fourth-best conference in the country. If the first-ever College Football Playoff is to take a national view of the state of college football, there's no question the top dog in the B1G needs to be in the final four-team grid.

2. No One in the Country Is Playing Better Than Wisconsin. If Wisconsin beats Ohio State, it will have won eight games in a row -- tied with No. 1 Alabama and No. 2 Oregon for the second-longest streak among CFP Top 25 teams. More impressive than this, seven of those wins will have been against bowl-eligible teams, and three (in fact, three of Wisconsin's last four games) against Top 20 opponents. During its current win streak Wisconsin has outscored its unquestionably formidable opponents 280 to 123 -- an average margin-of-victory of three touchdowns.

3. Melvin Gordon and the Chevy Bad Boys. The nation wants to see its best players play on the nation's biggest stage, and Wisconsin's running back, Melvin Gordon, is arguably the best offensive player in the country. He'll either win the Heisman or finish a close second in the balloting, and it's not hard to see why: during Wisconsin's seven-game winning streak, Gordon has carried 178 times for 1,389 yards and 14 touchdowns -- an average of more than 7.8 yards per carry, and basically an entire season of rushing yards squeezed into about half a season (given how many fourth-quarter blowouts Gordon sat out). By total carries, Gordon is the fastest player to reach 2,000 rushing yards in a season. But the Badgers aren't one-dimensional; unlike offense-only juggernauts such as Baylor and Kansas State, Wisconsin also has the second-best defense in America, led by a corps of linebackers known affectionately as the "Chevy Bad Boys." The Badgers' humble, no-name overachievers will win the hearts of American bowl-watchers instantly.

4. The Committee Can't Really Consider the Badgers' Loss to Then-No. 13 LSU. Back in August, the Badgers dominated a Top 15 SEC team for three quarters, leading 24-7 at halftime and 24-13 going into the fourth quarter. Then two things happened: the Badgers lost two-thirds of their defensive line to freak injuries -- two lineman left on stretchers -- and the coaching staff erroneously thought Melvin Gordon had injured himself and took him out of the game. Through the first half (and one play) of the game, Gordon ran for 147 yards on 14 carries; after that, he had 3 carries for one yard due to an administrative error. The result? LSU scored 15 unanswered points in the fourth quarter and won the game. The upshot: the Badgers didn't lose the LSU game on the field; rather, the coaching staff, aided by two freak (but critical) injuries, were the difference between a convincing Badger road-win over a top SEC opponent and a narrow loss.

5. The Badgers' Only "Bad Loss" Wasn't Actually So Bad. Losing by less than a touchdown to a Big Ten team that defeated then-No. 18 Notre Dame on the road and only missed bowl eligibility in its last game of the season is no crime. After all, Northwestern looked strong for most of the season, beating Purdue and a bowl-eligible Penn State team by a combined 67-20, losing to Michigan by only one point, staying within a touchdown of No. 18 Minnesota on the road, and giving a 9-3 Nebraska team all they could handle for three quarters, only to lose the plot in the final fifteen minutes. Early losses to a mid-tier Pac-12 team (California) and a possible MAC champion (Northern Illinois) were disappointing, but paint an unfair picture of this Wildcat squad. While two losses to bowl teams -- Iowa and Illinois -- admittedly weren't pretty, nothing in Northwestern's CV suggests that Wisconsin should feel any shame for having been in a position to beat the Cats on their final drive in Evanston.

6. Wisconsin Passes the Eye Test. Arguably the best offensive player in college football? Check. A top-ranked defense? Check. The nation's longest winning streak by any team not named Florida State, assuming a win against Ohio State? Check. A conference championship in a Power 5 conference? Again, assuming a win next week, check. Early-season quarterback issues that have now been solved, with starter Joel Stave sporting a nearly 200 Quarterback Rating in his latest game (against a Top 20 Minnesota squad)? Check. A coach who's a semifinalist for Coach of the Year in college football? Check. A fan base known to travel as well or better than any other? Check.

In other words, while we couldn't have said this early on this year, now that we live in the what-have-you-done-for-me-lately CFP era, it's easy enough to say that a likely-to-be No. 10 or No. 11 Wisconsin, assuming a win next week against a likely-to-be No. 4 or No. 5 Ohio State, deserves not only a Big Ten Championship and a bowl game but also a chance to play on for even more.

A former public defender, Seth Abramson is the author of five poetry collections and the Series Co-Editor for Best American Experimental Writing (Wesleyan, 2015). He is currently a doctoral student in English at the University of Wisconsin in Madison.