My sixth grade son Gus is running on his school's cross-country team this year. As a newly-minted middle school student at the same school that his older four siblings, I don't think Gus had a standing chance to say he was not going to run. It's what we do. So many of the kids at the middle school run cross-country, as it's a great way to connect with fellow students beyond the classroom, especially when you are in a big school. 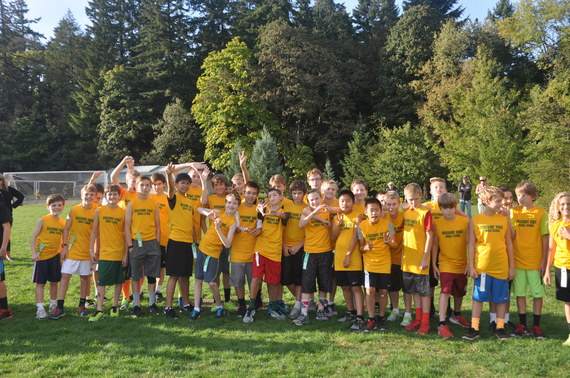 Gus wanted to join the cross-country team, so it wasn't like I had to talk him into anything; most of his friends were going out for the cross-country team as well. They meet each day after school, get a pep talk Coach Todd, and then run for a bit before giving their coach high 5's, grabbing their 30-pound backpacks and dashing off to the activity bus that takes them home.

After we ate our meal, I asked Gus if he has his school race shirt ready for the next day and I asked if he knew where his shoes were and if he had his special socks ready. Check, check, check.

Then I tried to give him some advice for the race, some running strategy, some reminders, some mom-coach wisdom. After all, I was a runner in high school and junior high, as were my sister and brother and dad. My siblings and I were not just runners, but we were dedicated and driven and committed athletes. We participated in several sports in high school, including basketball and track, and always loved it and did well with it.

As a mom, I of course want all my children to excel in sports as well, especially running. It's the one sport that most people can do without joining an expensive club and elite gym.

I've had Gus in sports since he was in kindergarten as I have had all of my children. He started in soccer, as is typical for this part of the world. Then it was basketball in first grade and t-ball and baseball in the spring. Some kids have that natural knack for sports while others have to work at it a bit more.

Gus likes certain sports and we've exposed him to all of them except when he refused -- lacrosse and football. Fine by me, for sure, as long as he knows he had the opportunity.

So, when it came to cross-country running this fall as a middle schooler, I was glad he took the school up on the opportunity. I know that many schools, especially middle schools, have eliminated sports due to funding shortfalls. Rosemont, the middle school that Gus attends, has cut back on other sports offered, but we are grateful they have at least kept the individual ones like cross-country.

And, though I say sports are about participating and completing the race and having a good attitude and being an excellent sportsman and learning team-building skills, I still want my kids to do well, to succeed, to feel good about their performance. When you are good at something, it does make it more fun.

So, on this eve of my son's first race of the season, after we ate our spaghetti meal together and were cleaning up the dishes, I thought it'd be a nice chance to encourage my son, to give him those pointers on racing. From veteran (ex-)runner, me. Ha, ha.

"Gus, hey, during your race tomorrow," I begin to tell him, "be sure to go out fast. Remember it's a race, not just a run and not just a jog. It's a race and races are going to hurt a bit. You can keep up with the leaders, you are just as good as any of them."

But, my ever-already-independent-thinks-for-himself-sixth-grader Gus looks at me, with those huge piercing brown eyes and says, "Mom, I'm not going to do that.

Wow. So much wisdom in that quote from my son, so much insight into life and living. And really, something I believe is one of my mantras as a parent.

I believe we as parents need to allow our kids to go at their own pace. To not be compared with others who are the same age, the same grade in school, the same size, the same anything, you name it.

There is nothing worse as a person, probably as a kid, than to be compared with others, to never measure up, to not be good enough.

My kid "gets" it. My kid is fine just where he is. He is awesome at technology, he is awesome at fixing things, he loves washing machines and buttons and gadgets and figuring out why something doesn't work. He doesn't love reading or sitting down to work through extra math story problems or sports really, but he does (some) of them.

At his own pace.