After an official ceremony at the U.N. 31 more countries have formally joined the agreement. This includes (see here for the full list of countries that have taken this formal step): 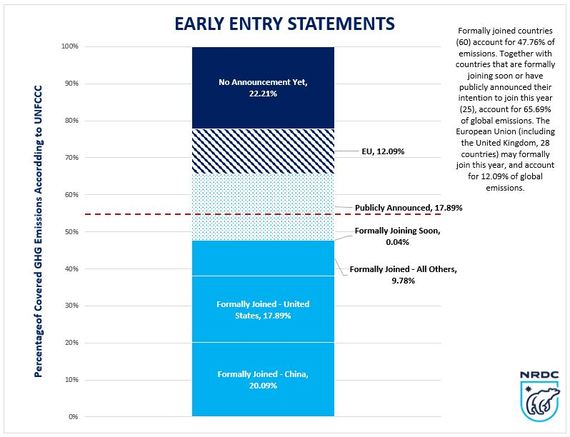 As countries formally join the agreement they also officially convert their "intended" national climate action plans into formal emission reduction targets that they will achieve as a part of the Paris Agreement. These targets are a critical element of the Paris Agreement as they represent the first time that all major countries have emissions reduction targets formally enshrined in an international climate agreement. These targets now become the "to-do" list for each country as they need to finalize in the coming years the necessary domestic laws, policies, and investments to meet these climate targets. Achieving these targets will require concerted effort, but I'm confident that countries will be able to achieve and exceed these targets. We will need more effort from these major countries over time as the world isn't yet on the trajectory to leave our children and grandchildren a place to live without the grave impacts of climate change.