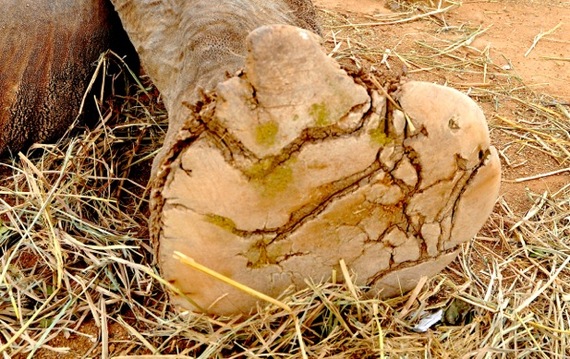 Suzy's cracked footpad tells the story of her terribly hard life. The image, hard to look at for any compassionate person, was taken as Suzy was evaluated as part of her impending rescue. Suzy is one of sixty-seven pachyderms living in terrible conditions in Indian circuses, despite a nationwide ban on the use of elephants in such shows. The next step for Suzy and the others is to find their way to safety thanks to Wildlife S.O.S, who has agreed to take on the facilitation of the rescue of all the elephants.

You may have heard of Wildlife S.O.S. over the summer when we rescued Raju, who had been held in chains for 50-years. The story of his rescue captured international media attention and cast a new spotlight on the incredible work of this organization. I first learned of Wildlife SOS in 2007 and eagerly accepted a position on the board of directors for Wildlife S.O.S USA in 2008. A trip to India soon followed, and seeing the work of the organization firsthand has forever changed my life.

That trip, at the end of 2010, coincided with the rescue of the final "dancing bear" of India. The dancing bears, as they're known, were the product of a centuries old tradition. Cubs would be poached from the wild and their muzzles would be cruelly pierced. The bear's owner (a term I use lightly) would then drag this wild animal around the country from weddings to places heavily trafficked by tourists to anywhere a few rupees might be available for the performed trick. A tug on the end of the rope attached to the piercing would cause the bear to jump up in an effort to reduce the pain. That movement, or "dancing" would result in a measly donation - not nearly enough for the owner and their family to eat, let alone enough leftover to care for the bear. It was a cruel and unusual practice, and one that Wildlife S.O.S cofounders Kartick Satyanarayan and Geeta Seshmani knew they needed to end.

Their solution was brilliant, yet simple. Knowing that many of the bear dancers no longer wanted to do this, they knew with the right incentive they could steer their lives in new directions. Instead of just taking the bears away (fully allowable given strict Indian wildlife protection laws), which would ensure a high recidivism rate, they also worked to retrain all members of the family in new careers such as carpet weaving, rickshaw driving - whatever they wanted. They supplied them with seed money to help them begin their new lives, and their kids were put in school at the organization's expense. More than 600 rescued bears later, and I was there in person to watch as Raju, the final dancing bear, was surrendered. It was an incredibly emotional moment for everyone and I feel incredibly honored to have been able to be there to see it firsthand. 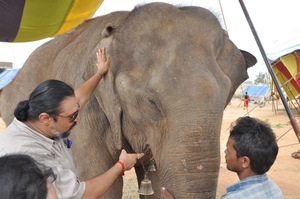 Although the organization was founded to help the dancing bears, the work of Wildlife S.O.S goes far beyond bears (remind me to tell you the story of the monitor lizard rescue I went on someday. It involves me on the back of a motorcycle flying through the streets of Delhi!). The organization set up India's first modern elephant care center, where elephants are given sanctuary from lives spent in servitude. Currently 12 elephants are split between two sanctuaries in India, where they never again have to be chained, perform tricks, or give people rides. They will be allowed to live their lives as elephants, happy, enriched, comfortable and loved.

But the need is very, very great. In 2013 India outlawed the use of elephants in circuses - finally adding them to the list of already outlawed circus animals that includes tigers, monkeys and bears. The rescue of the 67 won't come cheaply. At a cost of just over $110,000 per elephant, the first phase rescue of 17 elephants will cost more than $1.8 million dollars. A large price tag to be sure, but a small price to pay to pull these elephants out of their lives of misery.