If you're not already familiar with Nicolette Mason, you're going to want to memorize her name. The graduate from Parsons School of Design began her career at a brand design firm; but her keen interest in clothes and runway trends inspired her to launch a personal style blog on the side in 2008. It wasn't long before she was recruited to contribute to big name sites like Refinery29 and write for magazines like Marie Claire. Since then, the freelance writer-cum-editor-cum-designer has worked with Vogue Italia, Chanel and Dior, just to name a few.

But it's actually her work as a plus-size activist that has garnered the most attention. Lucky for us, we got to chat with the Los Angeles native about how she managed to break into fashion and whether she takes issue with the term "plus-size" in the first place.

You have done so many things in the fashion world. Was there one moment or endeavor that set you apart and launched your career?

It's honestly a combination of a lot of things. I was really lucky to start at Marie Claire when I did. I think being in New York was lucky. And then there are also just different access points. Being a privileged person has definitely helped me, and I think that it would be really irresponsible of me not to acknowledge that that plays into it. The fact that I look white and I come from an affluent background has been a huge foot in the door. And I went to Parsons, that was another access point -- I was already around this entire community from the age of 17.

But besides the things I have inherited through privilege, I'm also just really hard working. Being nice and having good work ethic are also really important, and being meticulous and detail-orientated is essential. You still need to be smart and hard-working even if you do have all the privilege in the world.

That's so refreshing that you acknowledge that privilege played a part in your success. Many people don't.

That's really frustrating for me, and that's something I see a lot in the fashion world. I don't think that there is anything inherently wrong with being privileged, but I think you have to acknowledge that that is a factor in a person's success. And it certainly is for me, and it's really important to think about and be critical of. 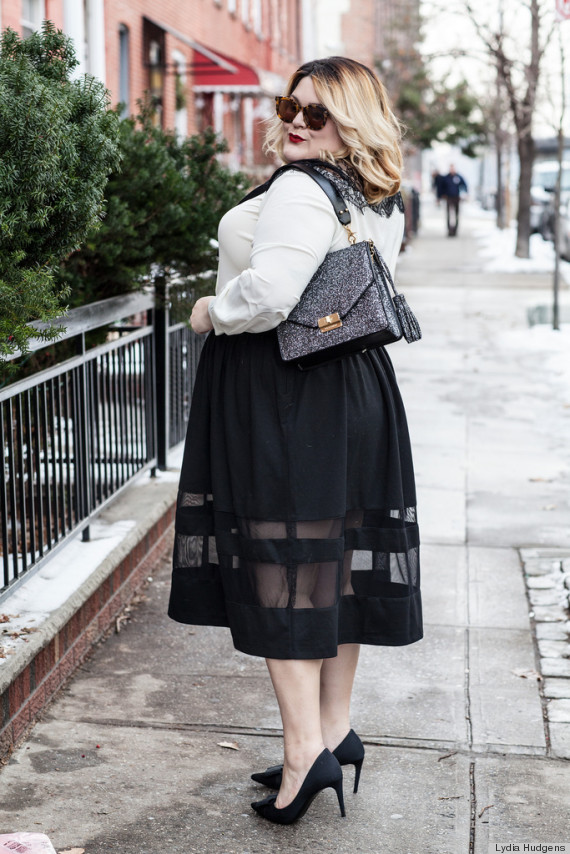 One of the big facets of your career is your work as a plus-size activist. First, do you take issue with the term "plus-size"?

I think in an ideal world, we wouldn't have any sort of differentiation based on size, but it's something that... we're not there yet. I don't have a problem with the term plus-size as a way to differentiate what this market is; because until fashion and the word is in a place to present clothing by style instead of breaking everything down by size, it is essential to have some kind of terminology that goes along with it.

But I don't hate the term. There are a lot of different terms that are used in this category and in the market. I don't mind when people use "curvy," as long as it's not being used as a euphemism in place of fat. That I do think is pretty ridiculous -- there are obviously curvy, plus-size people, but there are also plus-size people who are not curvy. Curvy is used as a way to talk about size instead of what it really is, which is body type -- and that's another conversation entirely. But I don't have an issue with plus-size in reference to clothing. I don't identify myself as plus-size. I'm a person. I'm Nicolette and I'm a lot of things in terms of identity, and my body is just part of that.

It seems like every article about you mentions that you are plus-size in the headline. Does that bother you that you're always associated with the term "plus-size"?

I don't even think that's the most interesting part of who I am. I'm also very openly queer and political about that, and there are very few openly queer women in the fashion world, and that's not something anyone talks about. I'm also Middle Eastern and Jewish, and I grew up in L.A. I feel like when the only thing we're talking about is body, it reinforces the idea that that's all that is valuable about women and that's how we should be categorized.

But, yeah, obviously I am plus-size. I'm fat. I'm quicker to call myself fat than I am to say I'm plus-size, because that's an accurate description of my body. I don't have a problem with that at all. But when it's the only thing anyone talks about, it's pretty ridiculous. 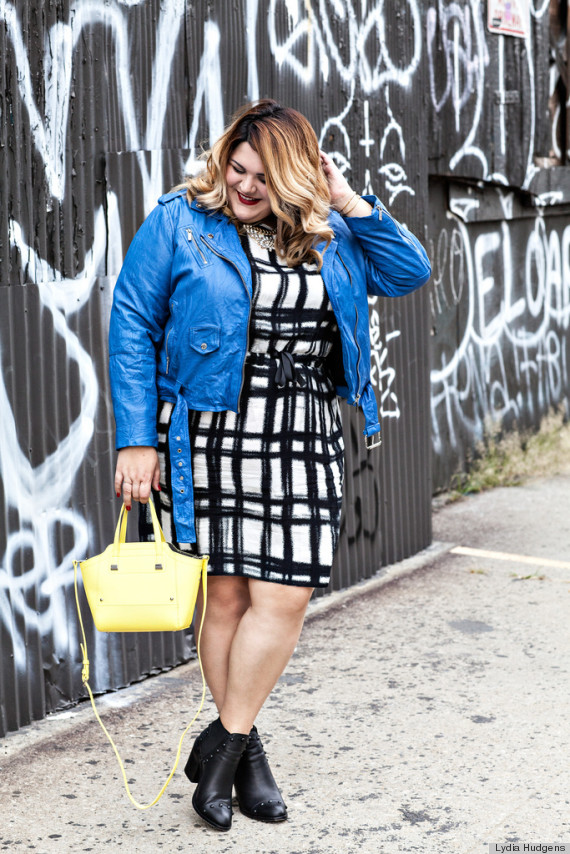 Women, regardless of size, are constantly being told what they can and can't wear. Do you think there are any rules when getting dressed, and do you adhere to any?

I just wear what I like, and that's often not what the most flattering thing is. My personal fashion rule is: Wear what you like and what excites you, because that's what's going to make you look the most confident. You could wear a trash bag, but if you're really confident about it, you're still going to look good. So that's my only real rule.

But what I think is so successful about my Marie Claire column, "Big Girl in a Skinny World," is it really speaks to all women universally. I think women and people in general who are interested in fashion are pretty exhausted with having rules hammered down their throats or being told that they can't wear this, or they have to wear this. It's just really tedious. So to have a page in a mainstream magazine that says you don't have to do this -- you can wear stripes, you can wear white bottoms -- is a refreshing change of pace.

Since you shop so much, have you had any memorable shopping experiences?

I've had so many negative experiences. Like, when I ask "Can I please see this in a size 14?" I know what size I am, but pieces always run differently -- if something has an elastic waistband, for example, I know it's going to be more generous. I have a really good fluency in cuts and fabrics and enough understanding to shop for myself regardless of what the tag says. But there are times I'll ask for the size 12 or the size 14, and the sales associate will respond, "That's not going to fit you." Most of the time, I just learn I'm not going to bother shopping in stores when I can go online -- I don't need to give this person permission and have them rewarded for the money that I'm going to spend. I can go online and not have to deal with it. That's a psychological conditioning that's been a product of being snubbed by sales people all the time.

I had one bad experience in the West Village where I was looking for this See by Chloé dress. I knew it went up to a size 14, and I knew that they had it at Bloomingdales, but I lived in the West Village and I saw it in the window of this boutique. But when I went in and asked for it, they said, "We only stock it up to a size 8." I was like, "Well that's ridiculous. The brand makes a full size going up to a 14, can you order it?" And they replied, "No, we can't do that, I'm sorry. This isn't the right place for you." That really pissed me off because this designer, who has designed it and is worthy of their boutique, does make a bigger size run. But the way they buy [stock] for their store is essentially implementing their own sizing discrimination. That was a shitty one.

I had a really good experience in Paris, of all places, where I was shopping at Sandro with my mom and my sister, who are both thin (my sister is a 2-4 and my mom is a 6). I've conditioned myself not to engage with stores and boutiques especially, so I was standing back and just helping them. But one of the sales associates approached me and said, "I think this piece would look really good on you. Let me grab a couple of pieces for you that I think would work." I was really taken aback, since Sandro is not a store I would consider generous in its sizing. But she took the time to help me and devote energy to me instead of my mom and sister, who would have an easy time buying clothes there. She did find a few pieces that worked and I ended up buying two of them, when otherwise I probably wouldn't have bought anything. She made me feel like a part of the process and included in that environment, which was so touching that it really took me aback.

It seems only natural for you to design your own clothing line next. Do you have plans or desires to do that?

I'm working on something now...