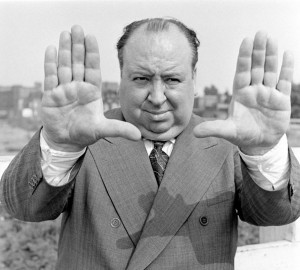 Treating words like camera-lenses and arranging them in a specific sequence, plays directly with an audience's perception of size. Whether you want your audience to perceive something as bigger or smaller, the ability to manipulate perceived scale is as much a part of the presenter's arsenal as it is the filmmaker's.

Picture the scene. It's bedtime, and your children are eager for a story. Which description of the villainous giant will get the kids more rapt:

In that second version, the giant is super-scale. He looms in the children's imaginations, and that's because you've guided them to observe the giant through a telescope of enlarging adjectives, and your subject now appears monstrously magnified at the end of it.

Couldn't we have saved some time and just gone with "He was a ginormous giant"? No we couldn't, because in this example, 'ginormous' itself is also being magnified through all the adjectives that lead up to it. By itself, 'ginormous' has no comparison point to lend it scale. It just becomes another random description.

Scale in speech and writing really is all about the way that you arrange the optics of your words.

Here are two examples - the first of which is from British comedy series Blackadder:

"This is a crisis. A large crisis. In fact, if you've got a moment, it's a twelve-story crisis with a magnificent entrance hall, carpeting throughout, 24-hour portage, and an enormous sign on the roof, saying 'This Is a Large Crisis.'"

And here's one from Washington Post columnist Dana Milbank, describing an unfortunate couple of weeks for the U.S. House of Representatives:

"What has happened.... has been less a stumble than a pratfall involving the legislative equivalent of a banana peel, flailing arms, an upended bookcase, torn drapes and a slide across a laden banquet table into a wedding cake."

The same technique works for numbers. President Obama, justifying a high-cost investment, once asked an audience to consider what America's infrastructure needs would be "a year, two years, five years, ten years from now". The audience, looking through an ever increasing series of numbers, would have then subconsciously carried the trend forward... "20 years, 50 years, 100 years". The president's budget request, put against such an unstated timeline of 100 years, would have seemed all the smaller by comparison.

Whether you're writing or speaking, when you want your audience to visualize something, borrow from the art of the filmmaker. Ask yourself what scale you want the audience to assign to that object and line-up your shot with care.

Get the right verbal optics and giants can become midgets while midgets become giant.

Peter Paskale is a communications coach and analyst who writes The Presenters' Blog at speak2all.wordpress.com