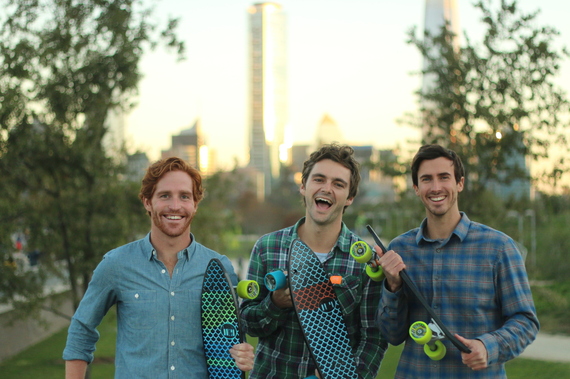 What if you could not only clean the ocean, but turn the pollution you collect into something people want? That's the basic idea behind Bureo Skateboards. They also compensate the fishermen for the fishing net.

With the motto "Skateboards for plastic-free oceans," and the slogan "Ride your Footprint," Bureo aims to reduce the amount of sea pollution by recycling discarded fishing nets -- which make up 10 percent of the world's ocean pollution -- into skateboard decks.

The boards are manufactured through the team's initiative, "Net Positiva" -- Chile's first-ever nationwide fishnet collection/recycling program. It provides fisherman with disposal points for old nets, essentially allowing Bureo to collect the ocean's recycling bins and mold the old stuff into something of value.

The nets are then separated, cleaned, placed in large reusable sacks and transported back to a recycling and manufacturing facility in Santiago using "dead-head trucks" -- otherwise empty trucks already returning to the plant, so as to not waste extra fuel. There, they're shredded, pelletized and injection-molded into skateboard decks. Each board is then quality tested, with defect boards fed back into the recycling process allowing for zero waste in production.

They're also providing a free service to the fishermen, who would otherwise have to pay to throw the nets into landfills -- a privatized business in Chile. They also compensate the fishermen, paying them the current market the fishing net.

"It's a win-win," said Kneppers, adding that the name "Bureo" comes from the language of the Mapuche, the native Chileans, and means "the waves."

"It's not just about the ocean waves, but about what we're doing -- trying to create this wave of change. If everyone does their part to create a ripple, then we're all part of the bigger solution," said Kneppers.

I first talked to Kneppers earlier this year when I wrote a story on Bureo for the Boston Globe. A few days ago, I learned that one of the most eco-minded companies around, Patagonia, announced a seed investment in Bureo:

"Bureo is not your typical startup -- they've invented an incredible recycling program by rallying the fishing industry in Chile to turn plastic ocean waste into a great product," Patagonia CEO Rose Marcario said in a statement. "We're investing in Bureo's vision to scale their business to a global level and make a serious dent in the amount of plastic that gets thrown away in our oceans."

Patagonia's investment comes through its $20 Million & Change fund, which they launched in 2013 to help innovative, like-minded startups bring about solutions to the environmental crisis and other positive change through business.

Patagonia actually helped Bureo get started: the director of Patagonia Chile wrote a letter of recommendation to help them receive a $40,000 grant from Start-Up Chile -- a government-sponsored program for startups. Bureo also received $10,000 in gap funding from Northeastern University's IDEA, a student-run venture accelerator, and ran a hugely successful Kickstarter campaign.

Ian McGee, a film editor at Farm League -- formerly Woodshed Films ("180 South," "Shelter") -- made Bureo's Kickstarter campaign video, and a short documentary, "Nets to Decks," which was screened at Pilgrim Surf & Supply in Brooklyn in April. The film is premiering in the "Save the Waves" film festival this fall.

At MIT's In-NOW-Vation showcase last spring, Bureo was named "Company Most Likely to Create a Cult Following," and they can at least count Jack Johnson as a supporter: The surfer/folk singer/ environmentalist jumped on a Bureo plastic cruiser in front of press after his concert in Santiago in March.

"That was such a cool moment, and I didn't even have a camera on me," said Kneppers.

Bureo's first and, for the moment, only board, The Minnow, is made of 30 square feet of fishing net and costs $65 for a deck. He called the Minnow "an ideal mid-size cruiser that can speak to a wide range of the market." A complete board -- with either blue or green Satori eco-cruiser wheels -- is $149. The boards can be purchased online.