The Associated Press amended the global warming section of its widely-used guidelines for journalists last week. This AP Stylebook change will have a far-reaching influence on how we talk about skepticism and denial by changing the way many media outlets and publications describe those who reject the reality of human-caused global warming. The entire modification consists of the following short addition:

To describe those who don't accept climate science or dispute the world is warming from man-made forces, use climate change doubters or those who reject mainstream climate science. Avoid use of skeptics or deniers.

This change was praised by deniers who have long claimed that the word "denier" is an intentional slur. Skeptics celebrated the restoration of their own label to its rightful meaning, but disapproved of the AP endorsement of the word "doubter" for giving deniers the appearance of intellectual integrity they don't deserve. The vast majority of scientists, journalists, and climate science advocates have been strongly critical.

As a skeptic and a scientist, I have been bothered for many years by the way the word "skeptic" was coopted by individuals who are anything but skeptical when it comes to using evidence to test unusual and extraordinary claims. Even more troublesome is the way many in the media compliantly adopted "climate skeptic" as a shorthand substitute for "climate science denier," giving the false impression that true skeptics reject the overwhelming evidence for human-caused global warming.

So I was startled one morning last November when I heard Scott Horsley of NPR describe Sen. James Inhofe as "...one of the leading climate change deniers in Congress." The use of this honest, straightforward, and precisely correct word by NPR made such an impression on me that I blogged about it here on Huffington Post. I contrasted it to the incorrect and confusing use of "skeptic" by the New York Times to describe Inhofe the very same week. It must have struck a nerve with others too, because it was the most widely read and shared post I've ever written.

My skeptical colleagues liked it too, and many of them co-signed a letter I drafted to the Times, asking that they stop using "skeptic" to refer to deniers. The Times didn't publish it, but the home office of the Committee for Skeptical Inquiry (CSI) (of which I and all the signers are Fellows) posted it online. A climate science advocacy organization called Forecast the Facts (now Climate Truth) turned it into a petition to the media in January, and another petition to the AP Stylebook editors in May. This is what led AP to make the changes, much to my surprise and delight.

My first tweet was a strong and unequivocal thank-you to the AP and to their science journalist Seth Borenstein for giving us our good name back. I thought the adoption of the word "doubter" to replace "denier" seemed a little weaselly, but the restoration of "skeptic" was such a glorious win for our camp that it wasn't even worth mentioning. After all, "denier" is rarely used by the mainstream media anyway, and the AP Stylebook does not apply to bloggers or scientists, most of whom had probably never even heard of it until now. By contrast, many of my colleagues and friends in the blogger community went after AP with a level of criticism I did not anticipate.

I maintain that this is not a hair-on-fire crisis. Two steps forward and one step back is still a step forward. For one thing, the AP Stylebook only recommends against "denier" when used as a label, which journalists don't tend to do (NPR's case was a rare exception). The reason given by AP is that "...those who reject climate science say the phrase denier has the pejorative ring of Holocaust denier." In other words, don't use it because it hurts the poor dears' feelings. But, as anyone on the science side of the climate wars knows, this is a red herring that deniers simply employ as an excuse to become uncivil and to claim that the person who uttered the d-word started it.

The AP recommendation on "denier" is essentially a nod to political correctness at the expense of verbal correctness. It defers to those sensitive souls who are butthurt by a word that entered the English language five centuries before WWII. Maybe the capitulation was because journalists are getting caught in crossfire, like one top science reporter whose image was poorly photoshopped to resemble a pimp by one of those tender victims of insensitive language. Journalists don't like that and I don't blame them. But appeasement is a suboptimal solution.

Significantly, the state of "denial" and forms of the verb "to deny" were not addressed by the AP. These words are still untainted by claims that they evoke the Holocaust -- not that deniers won't double down and try to make that stretch now. So it is still perfectly acceptable, and rigorously correct, for a reporter to say that Inhofe denies the reality of human-caused global warming. And when a journalist writes that someone is "in denial of global warming risks" it is not some sort of veiled comparison to Nazi sympathizers. Without an explicit clarification from the AP, the only logical interpretation is that the phrases "climate denial" and "to deny global warming" have always been fine.

On the other hand, the reasons given by the AP for avoiding the label "skeptic" also apply to the words "skeptical" and "skepticism". In fact, the AP directly quoted the letter from me and 51 other skeptics: "proper skepticism promotes scientific inquiry, critical investigation and the use of reason in examining controversial and extraordinary claims." It would not be consistent with the Stylebook to say that Inhofe is skeptical of climate science.

To assess the likely effect of the changes on reporting, I looked at headlines published by the Washington Post in a 3-month period starting shortly after our open letter went live last December. I counted all headlines that contained forms of "deny" and "skeptical" including "denier" and "skeptic" used as labels. I also looked for headlines using other labels, such as "critic".

First I pretended that I was a naive headline writer who mindlessly and liberally applied the AP stylebook guidelines assuming that even "denial" and "to deny" should be replaced. The effect on the 15 headlines was a wash, with 7 changes benefiting skeptics, 7 changes benefiting deniers, and one with no change. I then did the same thing but with a reasoned and judicious approach, understanding that "to deny" and "in denial" are still perfectly appropriate. In that case, 7 still benefit skeptics, but only 2 benefit deniers. Six are now unchanged.

Clearly, this is a win for skeptics. I have confidence that the vast majority of journalists understand that the country and western song "Cleopatra, Queen of Denial" is simply making a universally-understood cultural reference and has nothing to do with the Holocaust.

If you are a doubter that the word is innocent, then please don't watch the offensive video. But if you've ever ignored clues to avoid a painful truth in your personal life, you are still not being compared to someone who claims that nobody did anything wrong at Auschwitz. 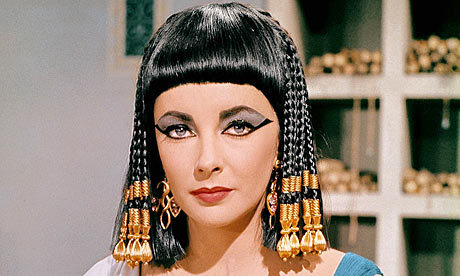 Well, I said he had a lot of potential,
He was only misunderstood.
You know, he really didn't mean to treat me so bad,
He wanted to be good.
And I swore one day I would tame him,
Even though he loves to run hog wild.
Just call me Cleopatra, everybody,
Cause I'm the Queen of Denial.

Well I knew he didn't have any money,
That's why he couldn't buy me a ring.
Oh, and just because he bought himself a brand new pickup truck,
Really didn't prove anything.
And he never had to say he loved me,
I could see it everytime he smiled.
Just call me Cleopatra, everybody,
Cause I'm the Queen of Denial.

Now I'm not gonna jump to conclusions,
Or throw away this perfect romance,
Even though I saw him dancing last night
With a girl in leopard skin pants.
Oh he's probably stuck in traffic,
And he'll be here in a little while.
Just call me Cleopatra, everybody,
Cause I'm the Queen of Denial.