Some 22,000 years ago, the Cro-Magnon man (an ancient homo sapien) strapped a pair of skis to his feet and went out for a gentle glide through the woods. His earliest archaic skis were likely no more than a couple of long sticks, but 22 millennia and a few key modifications later, the idea of skiing would become a fascination of the Nordic people.

In Norway, skis have long been an integral part of rural farm communities, allowing people to navigate in the harsh winter snow. The word "skíð" in Norwegian literally means, "split piece of wood." Though they were first used for survival, skis eventually became regularly used in military training. By the 1760's, officers were tested on their ability to maneuver terrain while avoiding obstacles. A hundred years later, skiing began its transformation into the recreational alpine sport recognized today.

As the sport and equipment continued to evolve throughout the 20th century, so did the apparel. From thick wool skirts to superhero-like costumes, the whimsical trends in ski fashion throughout the last century represent a laughable and disastrous example of ski apparel gone awry. Have we gotten it right in 2015? Probably not, but at least we still don't ski around holding giant wooden poles with fox furs wrapped around our necks... 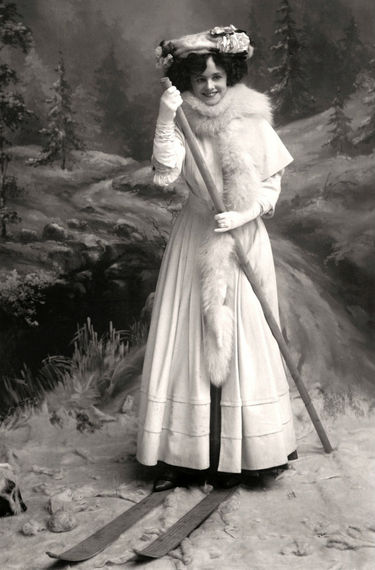 From the mid to late 1800's, emerged the early prototypes of what would become modern skis. Thanks to improvements in camber technology and the sweaty brows of Norwegian and Swedish innovators, recreational skiing began to grow in popularity. Before the turn of the century, skiing was nearly entirely dominated by wealthy, adventurous, European men. In the 1900's, however, women started making their way to the slopes.

As you can see, the idea of ski sportswear was unfamiliar and awkward territory: thick, long skirts, ridiculous scarves and massive, one-stick poles made skiers look like they had fallen out of a canoe into a heap of animal pelts. In fact, it was these early skiers that inspired Teddy Roosevelt's famous remark: "ski softly, and carry a big stick." 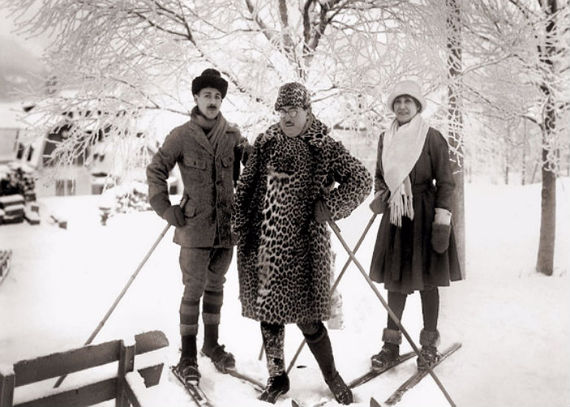 By the 1910's, the only glaring difference between male and female ski attire was the dawning of a knee-length skirt over knickerbockers. At the time, the fabric of choice was a thick, densely threaded burberry gabardine--the epitome of textile innovation. Alternatively, for those who wanted to avoid drab clothes with names that evoked the smell of cough medicine, one could dawn a newly invented rubber or wax jacket--effectively turning oneself into a greenhouse. And then, of course, there is the leopard fur coat. 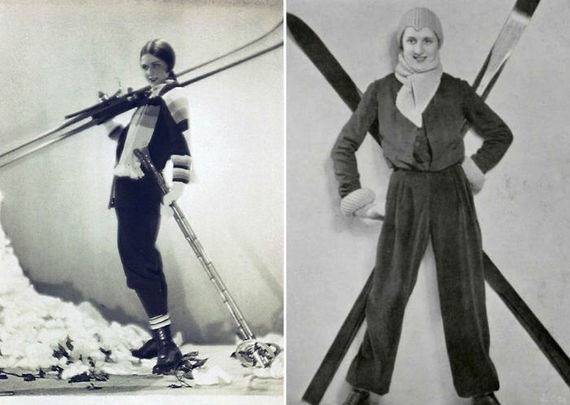 By the 1920's the sweeping influence of WWI manufacturing had created integral change in ski fashion. Uniforms of tunics and breeches, similar to those worn by the British Land Girls or "Women's Land Army", began to appear. Trousers (for women) became a wildly popular form of ski clothing, though they were still considered scandalous if worn for everyday activities. I mean, what says 'scantily clothed' like a pair of baggy wool trousers?

These new garments, along with advances in zip fastenings, allowed for more mobility of movement and increased comfort. In 1924, the first winter Olympics were held, further encouraging functionality over frivolous peacocking. 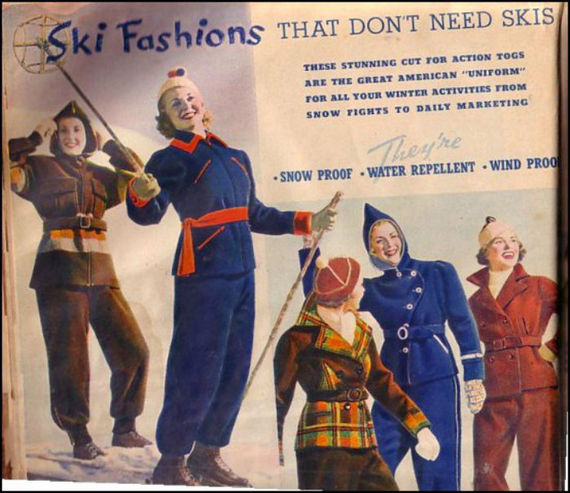 With the advent of ski lifts and rope pulls, the mechanization of the ski industry in the 1930's led to further changes in ski wear functionality. Along with these innovations came a rapid growth in the popularity of downhill skiing. As such, skiers finally started figuring out the idea of being 'aerodynamic', wanting tighter-fitting clothes that would allow for quick and easy movements.

Although garments were still being made of thick wool, some manufacturers began to make attempts at waterproofing. The late- thirties to early- forties marked the end of the "Golden Age of Couture"--a period, between the two World Wars, of high designer fashion. This shift helped shape modern dress and pull us away from knickerbottoms and skirts. Despite these giant strides in functionality, resembling a blue Crayola crayon (second from the right) was apparently still "très chic." 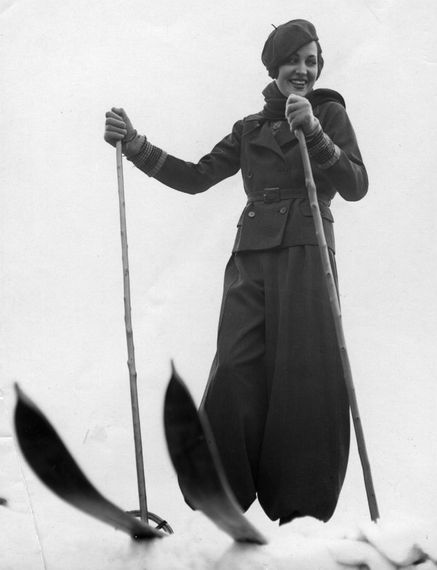 Throughout the 1940's, the two-piece suit continued to evolve, adding in more colors and patterns. Pants also began to take shape, with added emphasis on tailoring (this photo is early 40's mind you--check out the pants).

It was during this particular era that serious innovators, like Claus Obermeyer, started coming onto the scene. These clothiers began making giant changes to ski fashion, as functionality, warmth and layering were prioritized--though long skirts of velvet still remained hip. A quilted, fire red jersey was the "hot" top of the decade, but the introduction of new synthetic materials would soon change ski apparel in big ways. 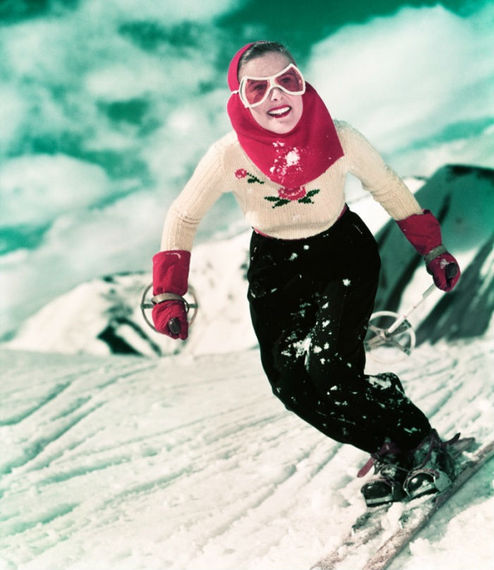 The Wizard-of-Oz-technicolor/early-Batman vibe of this early 50's photo perfectly encapsulates the awkward, teenager-like period that was mid-century ski fashion. Recreational skiing began to explode, due to quicker access to travel and new materials for both skis and skiwear. Either way, it would be at least another decade before the clothing resembled anything we would recognize today as appropriate ski wear. So for the time being, people dawned their brand new polyester (first released in 1953) sweaters and got to work on their epic goggle tans. On the bright side, at least you could see the world through rose-colored glasses. 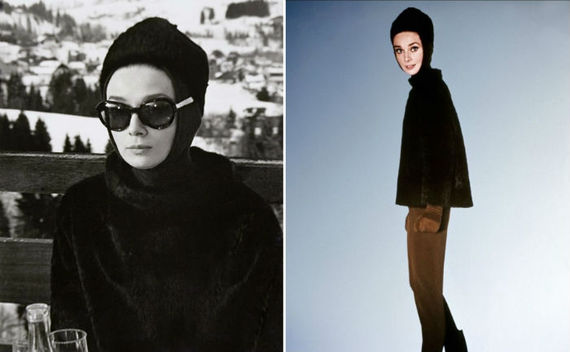 PHOTO: Shrimpton Couture
In the 1960's, ski fashion took a turn for the glamorous, inspired by the mod looks on the runways. Considered by many to be the height of ski fashion, I might agree. Audrey Hepburn's look in the classic film, Charade, is a perfect representation of the decade.

Along with high fashion also came the invention of spandex, which gave rise to the look of the modern ski racer, and forever humiliated prepubescent neophyte skiers. 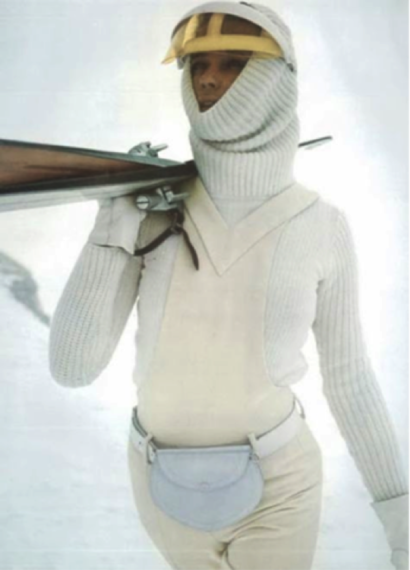 The 70's - ski moonboots, capes, fake fur and psychedelic colors. A time of far-out experimentation and creativity. How could one go wrong? Enter Pierre Cardin's knit-suit of 1971. Call me crazy, but I don't hate it.

Despite the various products of the era's experiments, the 70's yielded some serious advancement in skiwear. The fleece midlayer, for instance, was a major technological development that is still used today! 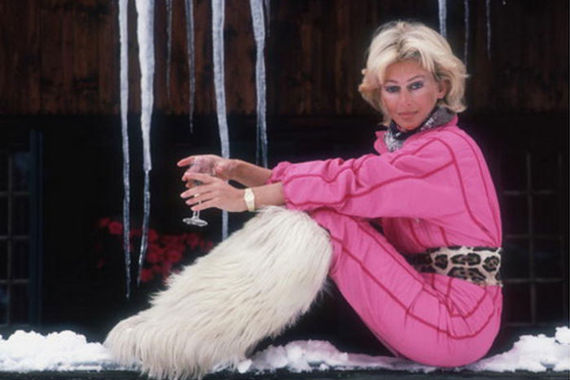 Oh, the 80's. What's not to love? Onesies and bib overalls became "all the rave" (they're making a comeback, guys). Abstract and animal designs were highly adored, along with soft pastels and fluorescent colors. Encapsulating this theme quite nicely is princess Bianca Hanau-Schaumburg (pictured above). Interesting to note: her boots were actually made from her own hair after years of dedicated trimmings... 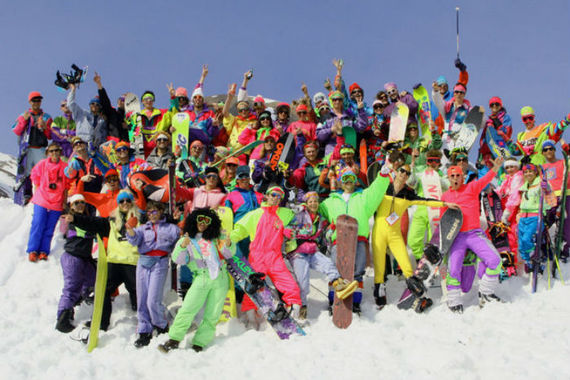 PHOTO: On The Snow

Don't you miss it? The loud neon colors, the frosted tips... so classy, so elegant. And, for some reason, people still can't get enough of these onsies. 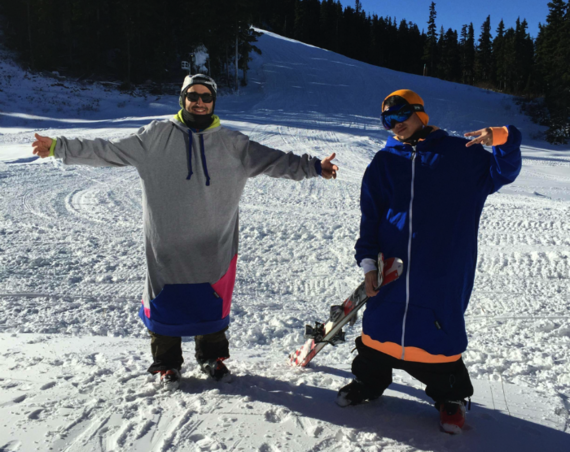 Commence discussion: what was your favorite (or least favorite) trend from the last 100 years?

Editor's Note: This post was written by Nicole Roosien, Creative Director at GetOutfitted - a web-service that rents ski apparel & accessories online and delivers directly to your destination.