A dream spokesperson is someone who has the media hanging on every word. Of course, she or he needs to actually be able to speak on the subject too in order to fill the "spoke" part of the job description. Bristol Palin, the newly chosen spokesperson for Candies Foundation's teen pregnancy prevention campaign, has, yet again, harnessed the immense media interest in her to draw attention to the problem. This week she landed the cover of People magazine, appearing in graduation cap and gown, beaming with her baby Tripp in her arms. On the cover also appears a quote from her. It reads, "If girls realized the consequences of sex, nobody would be having sex. Trust me. Nobody." 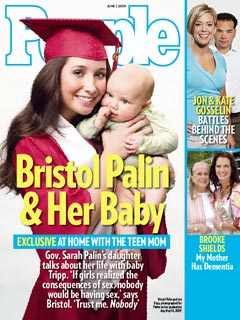 Before Bristol gets the cover of another mass market magazine or sits down with Larry King, someone needs to arm her with the tools to convey her message most powerfully. When it comes to teens having sex, "trust me" is not the most convincing argument against it (more likely it's the phrase used to convince someone to go for it.) Bristol's style as a spokesperson seems decidedly uninformed. The Candies Foundation may feel Bristol has the media Midas touch and that having her out there basically saying "Teen Mom...Hard" is enough as long as she draws attention to the issue. But what would be much more interesting and have a greater impact is if she strayed beyond her personal experience to help inform the national discussion with some compelling facts about the teen pregnancy problem which happens to be near epidemic proportions in the US. With a national platform comes a responsibility to rise to the occasion, become informed about the issue, and be a true leader.

Just a couple of weeks ago I observed Bristol in person for several hours at a her debut press event. It's probably safe to say she hasn't gotten the much needed media and message training between then and the People interview. For advocates like me, the cover of People magazine is the Holy Grail. And so, it's particularly painful to have Bristol squander the massive opportunity to educate by not being fully educated herself on the issue. It's especially unfortunate since so many of the facts about teen parenthood underscore the points she's trying to make. For example, Bristol appears on the cover in cap and gown, to signify her recent graduation from high school. Becoming a mother and a high school graduate in the same year is a true achievement, not to be minimized. But it's also an opening for Bristol to point out that it's unusual too. In fact, according to the National Campaign to Prevent Teen and Unplanned Pregnancy, teen pregnancy is the leading cause of school drop out among teenage girls. Less than half of the mothers who have a child before they turn 18 ever graduate from high school. Bristol hopes to go to college, but she could point out that it's going to be much more difficult for her to complete college than it will be for her peers. Less than two percent of mothers who have children before age 18 complete college by the age of 30. These facts would have made her message all the more sobering and given her another chance to use her life to point out the most severe outcomes of premature parenthood.

Interviewers always ask her about her strained relationship with Levi too. This has provided awkward moments for Bristol who clearly doesn't want to go there. Yet, these questions provide a great opening for her to get to a more important point. She could say, "Here's another problem with teen parenthood. Levi and I are like most other teen parents in that we aren't together. Eight in ten teen fathers do not marry the mothers of their first children. Levi will play an important part in Tripp's life because I'm committed to that and believe every child needs a father. But it's far from the ideal arrangement. It will be the arrangement we'll all have to struggle with for the rest of our lives though." If she wants to use her experience as an example, well then let's do that. The facts, again, offer her an easy way to be a powerful messenger.

The outcomes of teen parenthood are too serious to be ignored by someone who is now the most prominent messenger on the issue. The impact is not just on the teen mom's and dad's life either. In fact, the greatest effect is on the children of teen parents. They are more likely to be born prematurely at low birth weight compared to children of older mothers, which raises the probability of infant death and disease, mental retardation, and mental illness. Children of teen mothers are 50 percent more likely to repeat a grade and are less likely to complete high school. The children of teen parents also suffer higher rates of abuse and neglect (two times higher). Not only can Bristol use her experience to dissuade others from falling into the same fate, she can be a model for those who do.

Bristol has so much opportunity to make an important impact in these areas and with just a little guidance from the experts she can. Hopefully, she'll seek out that help. It'll make her a much more interesting figure who, while keeping the fickle media engaged, can educate those at greatest risk. There are many people ready to help because the experts know it takes a village to raise a spokesperson too.

For breaking news on threats to birth control access and information visit birthcontrolwatch.org